Once upon a time there was a skein of yarn named Blueberry Swirl, but his friends called him Blue.

Blue sat on the store shelves with his friends and family, waiting for the day when he would be purchased and used for an extremely important project. From his place on the shelf he could see the free patterns that the store allowed customers to take. There were hats, scarves, sweaters and shawls. As he waited Blue dreamed about what type of garment he would be used to make.

Some days he adorned the head of an Olympic skier as the Press interviewed the gold medal winner about his trip down the mountain. Little Blue would grace the magazine covers of all the most widely-read sports magazines.

Other days he dreamed about being made into a beautiful shawl that would appear in the latest blockbuster motion picture. He would be part of the costume tour that would travel around to all of the most important museums where people could look at the shawl and marvel at its beauty. 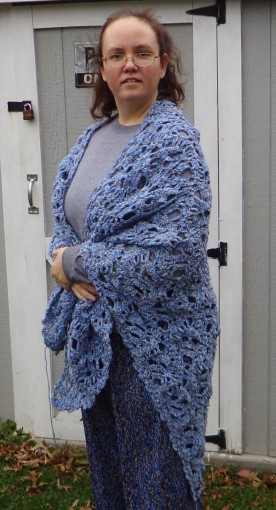 Then there were times when he could imagine himself being used for a cardigan. Not just any cardigan, though, this cardigan would be worn by the smartest scientist in the world who discovered cures for a lot of terrible diseases.

Blue knew that he was destined for greatness. His future wouldn’t consist of being part of a blanket that a pet would shed all over, nor would he be a baby blanket to be drooled upon and soiled. He refused to even consider that he would become part of a garment that would end up at a thrift store, unpurchased and unloved.

The day finally arrived when blue was purchased and taken home. The woman who purchased him and a few of his brothers placed them in a room with many other skeins of yarn. Blue didn’t want to get too friendly with the others as he didn’t expect to be there for long. Remember, he was destined for greatness. 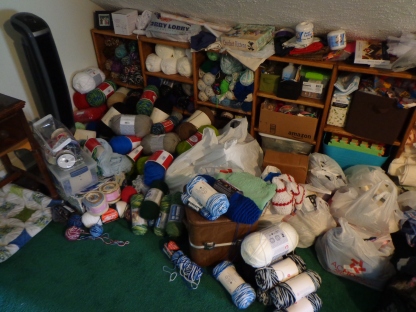 It bothered him a bit when he would overhear the others talking about being included in blankets. Maybe THEY would be blankets, but not him. He had bigger plans. He had more important plans.

One day the lady came back and made a selection of blue yarns, including Blue. This was it! This was his big moment! With heightened anticipation he watched as the lady used another skein of solid blue yarn to crochet a long chain. Hmmm… that was too long for a scarf. Maybe it was a shawl. Then he noticed that the other yarn was being crocheted into ripples. One of the free leaflet patterns he had stared at for months was a rippled afghan with a baby on it. Oh no! It couldn’t be…

As the lady crocheted him into ripples that matched the other two yarns’ ripples, he began to get nervous. Out of a bit of desperate hope he tried to casually strike up a conversation with his new neighbor. “Uh, hiya. My name is Blue. Do you happen to know what we are being used to make?” The other yarn was a light blue solid yarn who had been sitting around for a while. “Hi! My name is Frosty! I don’t know, but I’ve heard talk of blankets and little boys. I can’t wait! Even though we will be a blanket we might be used as a fort, or as a ghost or as a cape. It will be great!”

Blue was so depressed about the prospects of being jerked around by a rowdy little boy that he didn’t try to carry on any more conversations. When the lady was finished crocheting the blanket (yes, his heart sank when he realized for sure that’s what he had been used to make) she tossed it in the laundry, and once dry, bagged him up.

Blue stopped dreaming about greatness. He had given up. There were so many great things he could have been part of, but instead he was going to be a dirt magnet. He would be soiled, walked on, and treated like any other blanket. His life was going to be miserable.

After living in the bag for a while he suddenly realized they were being transported somewhere else. The bag opened and the blanket was lifted out. He heard machines, smelled a weird smell, and heard somebody say, “This is for you.” He looked up to see a little boy in a hospital bed with big scared eyes reaching for him. As the boy rubbed his face into the blanket another voice said, “Whenever you get scared you can wrap your blanket around you and know that you are being hugged and loved. Love was put into every stitch of this blanket as it was being made for you.”

The little boy held the blanket close and wouldn’t let it go. Blue realized that he WAS part of an important piece. He may not ever be seen on the big screen or in magazines, but to this little boy he was the most important thing in the world. And he was loved more than he could ever imagine. Yes, Blue knew he was destined for big things and he was right.

1 Response to A Yarny Tale