Jay has really enjoyed working on this layout. He hasn’t actually told me so, but I can tell because I can hear him singing, “I’ve been working on the railroad all the live long day.” It’s so cute! He’s been having to keep that frame of mind lately as he’s been working with road crews. 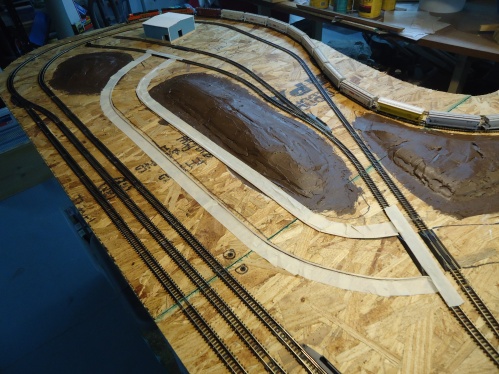 If you’ve ever dealt with a union then you know how it goes… only one guy can lay down the masking agent. Then they have to take a 20 minute break. After that the second guy can come through and take measurements to make sure the first guy laid everything down correctly. 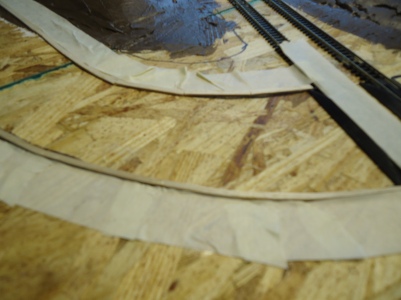 Once that has been done the second guy confers with a third guy to verify that it matches the blueprint. I could keep going, but you all know that what it boils down to is a quick and easy job ends up taking six times longer and costing 30 times as much as it should have. That’s why you’ll see that this was done in different stages due to union rules.

Once the thirty people had signed off on it, they laid the base layer. 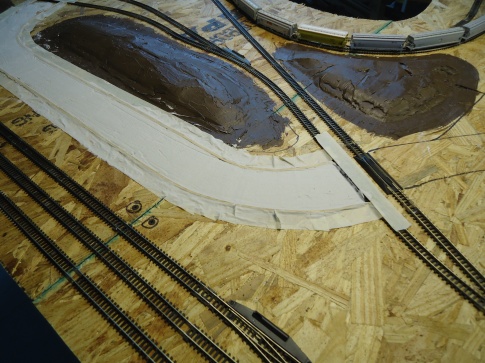 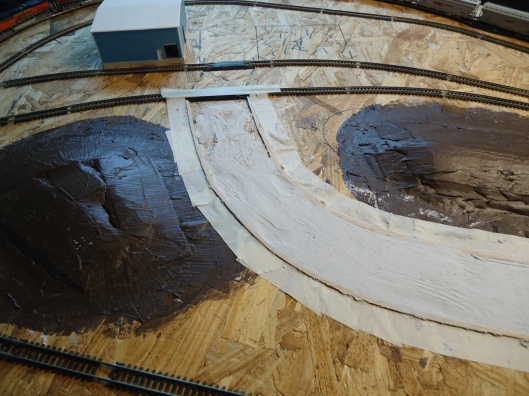 At this point it took three days to figure out which crew member was responsible for not ordering enough product. The guilty crew guy called his union rep and they held a meeting with HR and management where it was decided that for his punishment he would get a stern look and a disapproving finger-wagging. Luckily they were able to get this resolved quickly and finished laying the base layer four days later. 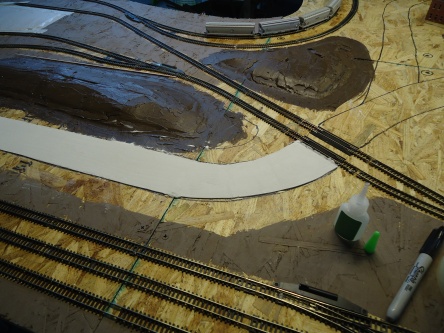 After the masking agent was removed it was quitting time.

Not only did the road crew have to pave roads, but they were also in charge of the crossings and parking lots. 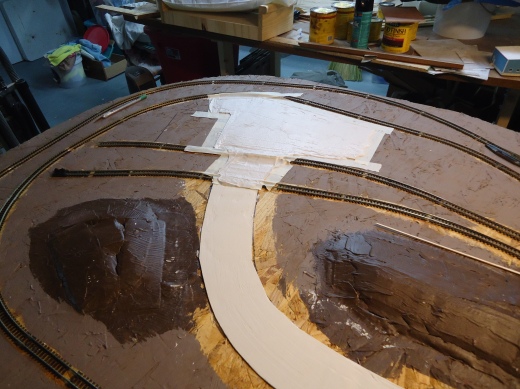 As the roads were being paved Jay kept busy by painting the rest of the layout. At this point I had stolen the chocolate icing paint and diluted it with a peachy-tan color. I used it in my sewing room, but there was a LOT left over so he’s using it here.

There are roads all over the layout. 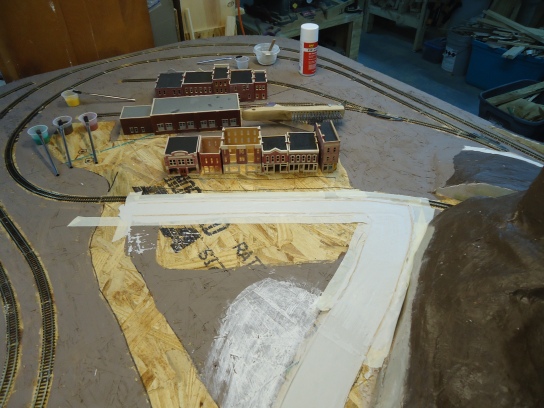 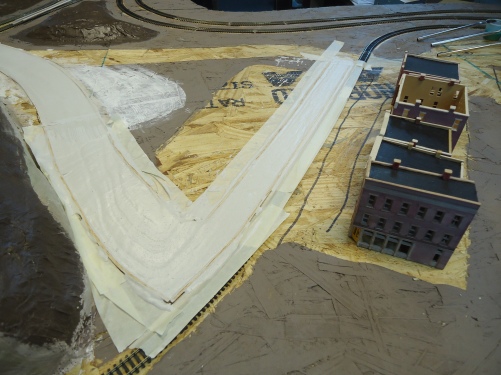 Once the base layer was settled and ready, the road crew went back and asphalted everything. 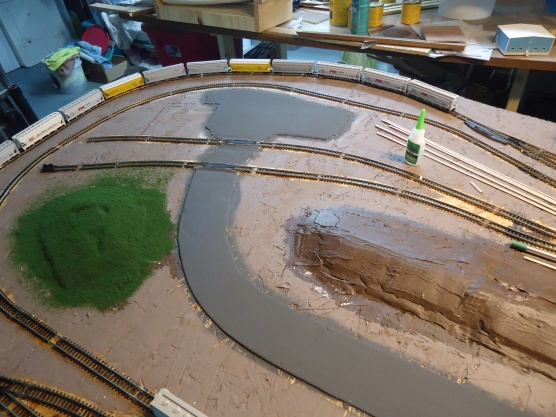 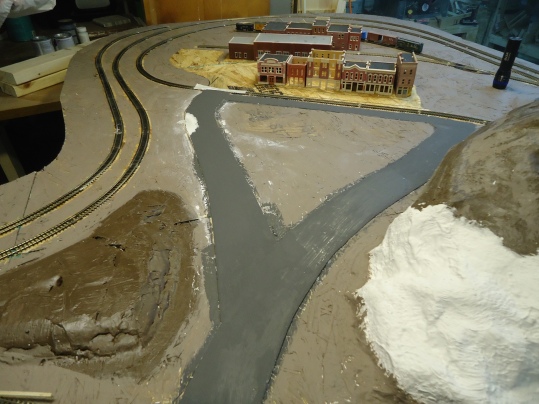 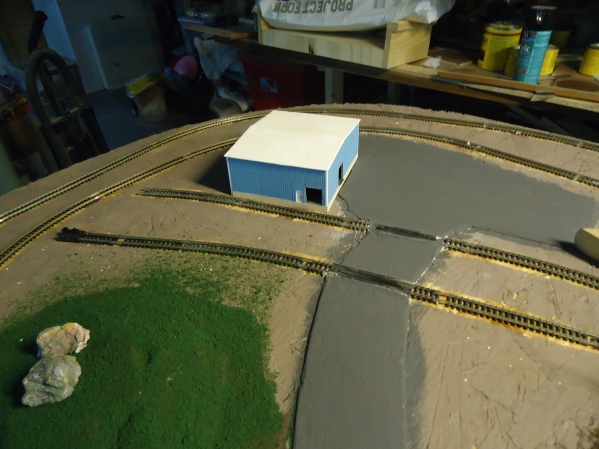 As the first crew was asphalting, a second crew started to do some connecting work on other parts of the road. 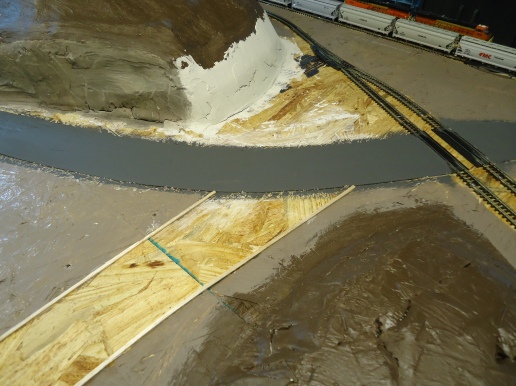 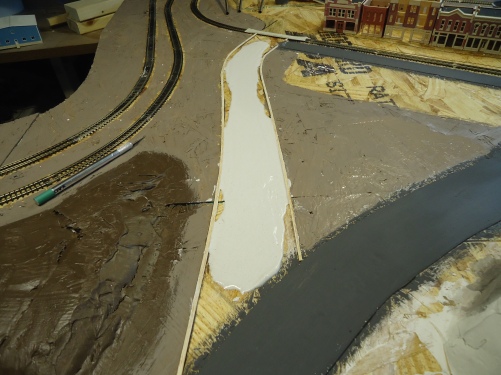 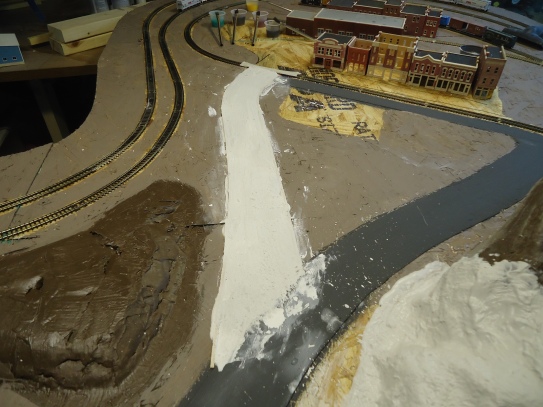 The union reps had to be called in again when two different crew guys insisted that it was their job to do a certain part of the paving. They made a mess arguing with each other. A third crew was called in to fix their mess. 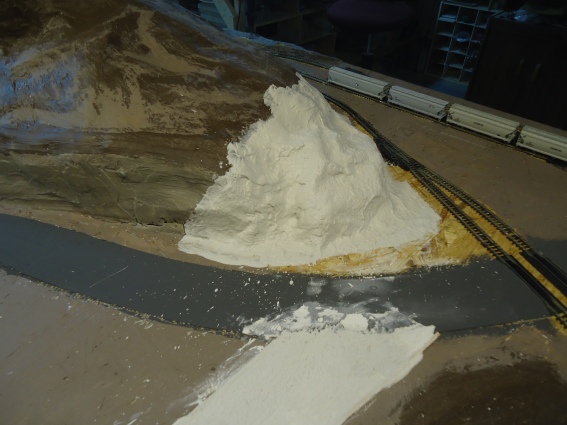 This third crew did such a good job that they were hired on to prepare for the paving of a second parking lot and a strip mall. 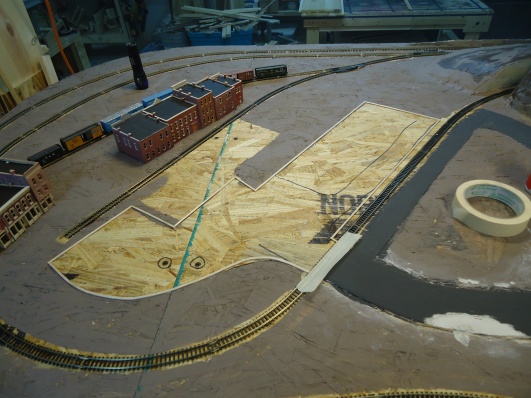 This area required some additional structure beneath the base layer. 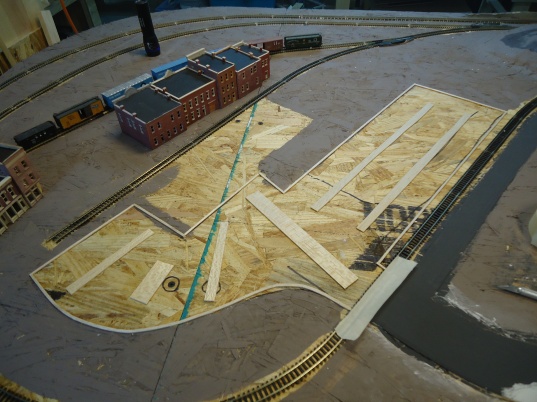 The developer expects there to be heavy traffic and lots of activity in this area. 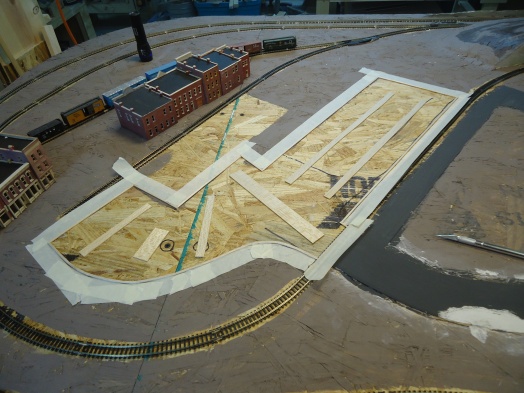 After the code officer signed off on the additional structural requirements the crew prepared for paving. 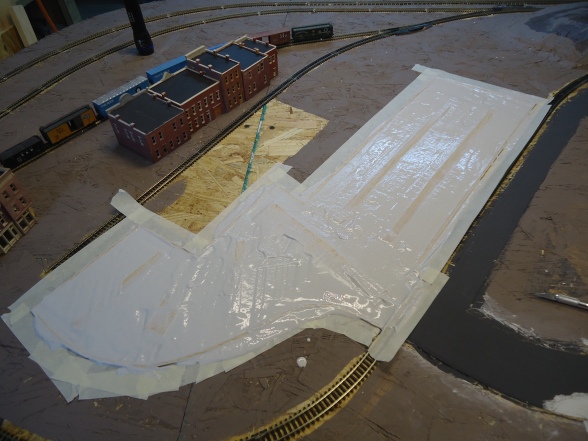 At this point a cease-and-desist order came from the first two road crews because they felt they had been cheated out of the job. We are waiting for the case to undergo arbitration. In the meantime, some of the citizens of the town started a petition to try to keep the developer from paving this area. They feel that it should be fenced and made into a dog park or an art park. They are unhappy with the amount of green space that has been lost. The town council has agreed to discuss this at their next public meeting in two weeks. So we are at a standstill until these two things are resolved. *sigh*