Maybe I should have titled that ‘The Great Migraine-tion’. If you’re a home owner, or have been one in the past, then you know that every little “easy” project you take on very quickly becomes a giant monster that eats away at your very soul. I had one of those recently in the form of my bathroom closet.

My most recent home project was to move my sewing room downstairs. That shouldn’t be too difficult, right? HA!

…to make room for the Office things…

… so that we could move the Spare Room upstairs.

The first part was easy. 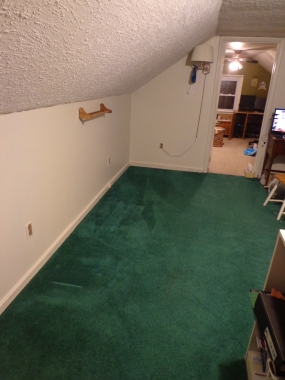 I emptied out most of the sewing room things into the living room. 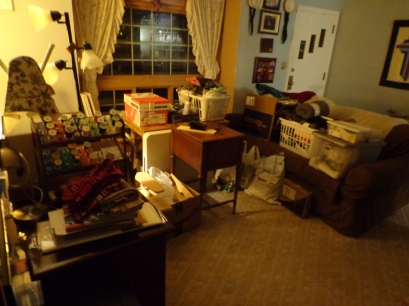 Then I moved the office stuff into its new location.

Then came the hardest part… moving the full bed up the very narrow stairs.

But due to my resourceful husband (who soldiered on despite a moment of frustration and tears on my part), we managed to move the furniture into the room.

(That is my crochet mess out in the other room, which will be organized *cough* once I get the sewing room finished.)

Jay asked if I was going to refinish the floor, but I said no. The floor is a beautiful oak, but it leaks out into the hallway and into our bedroom. If I only refinished the sewing room floor I would then be irritated that the rest of the floor didn’t look as beautiful (since you would be able to see where we stopped), and then I would have to redo those floors… and the library floor and living room floor… I don’t have that kind of time!

I want to get my sewing room set up so that I can begin sewing again. I already have about six projects lined up in my head that I’m itching to start. So the plan was to pull down the Tinkerbell border at the top of the wall, clean up whatever spots might need it, and then paint. I should have it all done by the end of the weekend.

I had to run errands Saturday morning, so I didn’t get started until Saturday afternoon. No problem. I could get it prepped and then paint it after church on Sunday.

I ripped off the Tinkerbell border to find this:

Was this just a border or was it wallpaper? One way that you can usually tell is by taking a look around your outlets. I found one that would more than likely have everything beneath the pink paint well preserved.

Apparently the last home owners decided that removing outlet covers before painting was too time consuming. I ended up having to get a razor blade to cut the paint so I could remove the cover. When I did that, I really wasn’t sure what I was looking at in the way of wall layers. Was it paper? Was it just really thick paint? It was hard to tell.

Looking back up at the teddy bear border I could see an outline beneath the pink paint, so I was pretty sure that it was just a border. Nothing else. However, their paint jobs in this house did NOT impress me at all.

I’m guessing they started out with a different shade of pink and realized it would be way too dark for the room. When they switched to the lighter shade they decided that painting up close to things was much too difficult and time consuming as well. This way they only had to use the roller that they were using on the rest of the wall.

Which also brings me to the trim. This house is full of beautiful oak trim… that the stupid people painted!!! 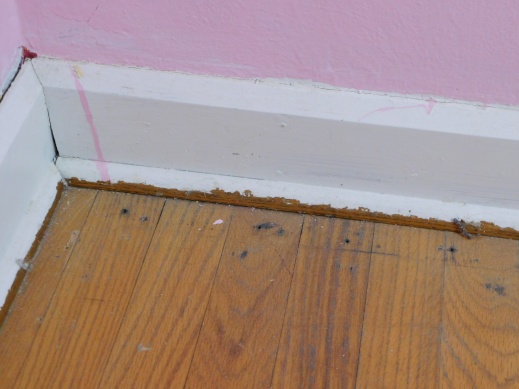 Back to the border…

Can you see the white paper that was left behind from the Tinkerbell border? That happened every where they had painted over the teddy bear border. The TB border is vinyl so the top layer peeled off nicely. I knew that I couldn’t spray it with vinegar water to loosen it as the liquid wouldn’t be able to penetrate it, so I asked Jay if I could borrow his heat gun.

With the heat gun and my putty knife I started in on the task. The border was starting to come off! But so were the other layers. These walls are all plaster and I’m thinking that they weren’t properly prepared before paint was added because it seems that the paint has decided it doesn’t want to stick any more. You guys… after four and a half hours of working in this room I ended the day like this:

I haven’t even cleaned off one wall! When the paint started to peel off it was in a big enough piece that I couldn’t just leave it. I thought about using some drywall mud to maybe just feather it in, but I also don’t want it to end up looking horrible. I mean, I already have a patch to fix:

I don’t know what happened there, but I do know that they SUCKED at any of the basic home ownership tasks. The other thing that I wondered about with this wall is I think that I am stripping off wallpaper, too. I can’t be sure. The swipes that you see on the wall that look like marks made in plaster aren’t actually on the plaster wall itself. The texture peels off when I pull the layers off. So I don’t know if it was a decorative painting technique that was used, or if it was a textured paper that they put up and then painted.

All I know is that I’m going to be working on this room for the next six years. *sigh*

Why couldn’t it have been easy? Why do I have to care so much that things are done correctly? Why can’t I just throw some paint on the wall and then let the next owner deal with fixing the problems?

I don’t enjoy these kinds of projects. I do them because a) I’m cheap and I don’t want to hire it done and b) the times we’ve hired something like this done I have NOT been happy with the results. I know how to do this stuff because I helped my parents do it when I was growing up. So I delay gratification a lot longer so that I can do the job and get it done to my specifications. That way I won’t hate spending time in the room looking at a wall that looks like crap.

1 Response to The Great Migration…