Jay and I share many things in common, but one of them is the fact that we both have numerous hobbies that we tend to work on at the same time. Or at least, we tend to have numerous projects going on in different areas at the same time. For me it’s crochet, sewing and finishing/concrete statue painting. For him it’s wood working, electronics, machining and anything aviation. It shouldn’t surprise me that he has been using one of his hobbies to improve another.

Jay has been messing with his CNC router for a little bit. He had to replace the router part of it earlier this Fall. While tearing it apart and putting it back together he became very unhappy with the current equipment. 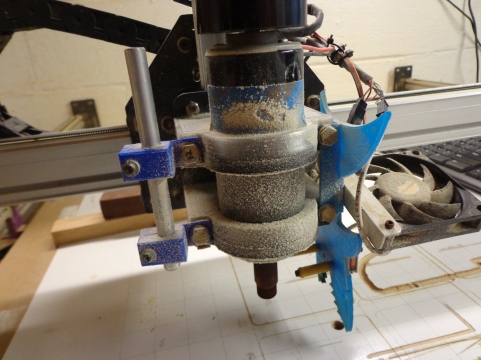 He has been using mounting brackets that he 3D printed quite a while ago. I was told the other night that he’s unhappy with the slop that they create and so he needs new ones. Except, again from what I’m told, the company no longer sells parts for this particular machine. And even if he can find the parts online, what’s the fun of having your own machining equipment if you’re not going to use it?

The first thing he wanted to do was replace the mounting brackets. 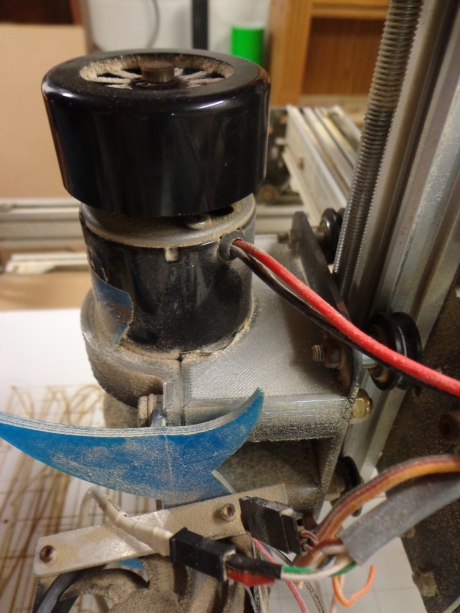 The current mounting brackets can be seen in this picture. They are what hold the spindle on the machine (the spindle is the round spinning thing that does all of the cutting). After work one night Jay stopped by his favorite place for buying metal stock. He picked up a nice piece of aluminum. 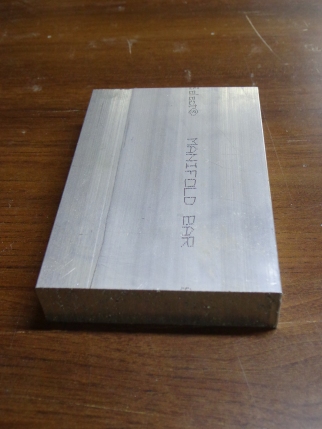 He said an incantation, did a little Machining dance, and then tapped it with a hammer. 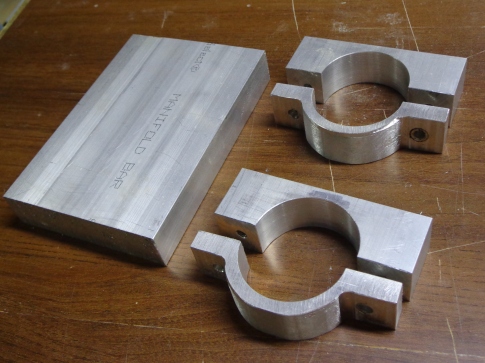 Isn’t that amazing? He’s so talented!

Except, now he needs a back plate to actually mount the brackets on. 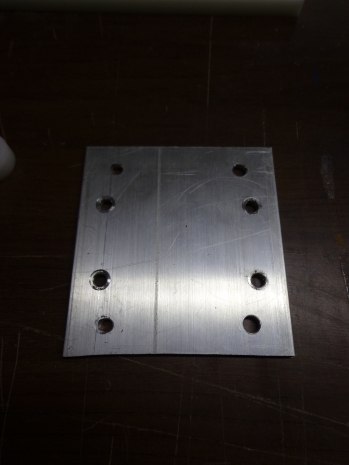 Found it! Never mind… we have one right here.

I’m sure he told me, but there’s a reason why he had to make new carriage wheels for the machine. He might have had to make them just because he could. Who knows.

Either way, he dug up a piece of HDPE. 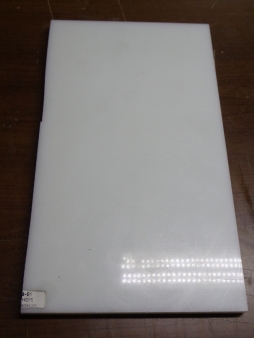 Instead of cutting wheels, though, he cut squares! 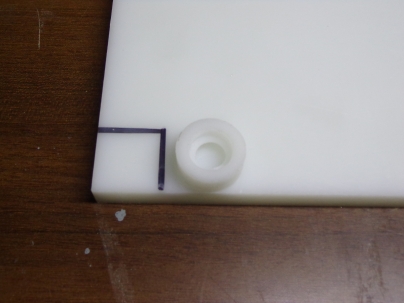 See, Jay, wheels are ROUND. Not SQUARE. *sigh* 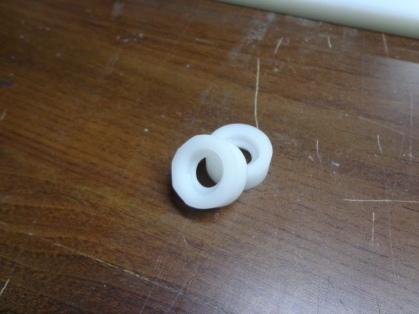 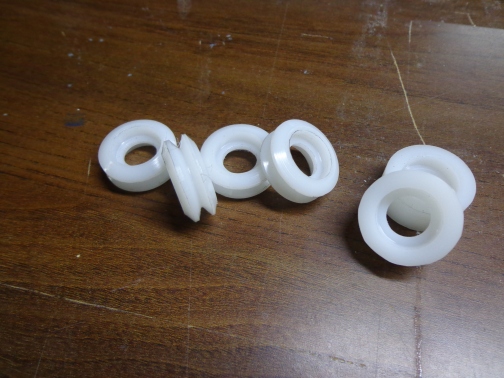 Using the Vulcan nerve pinch he then pushed the middle of the wheels into the inside… so that there’s a groove running along the outside of the wheel and a lip on the inside.

Finally, he installed bearings to complete the wheels.

He did that by hand. It was very boring. 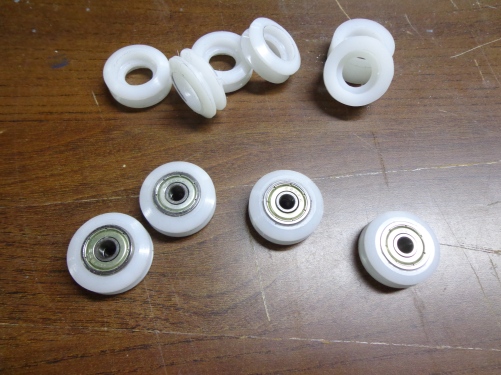 These wheels will be used to carry the spindle all over the frame.

The Jedi mind trick did a really nice job of creating smooth wheels for the track. And the Vulcan Nerve Pinch gave the groove the perfect measurement for the track. 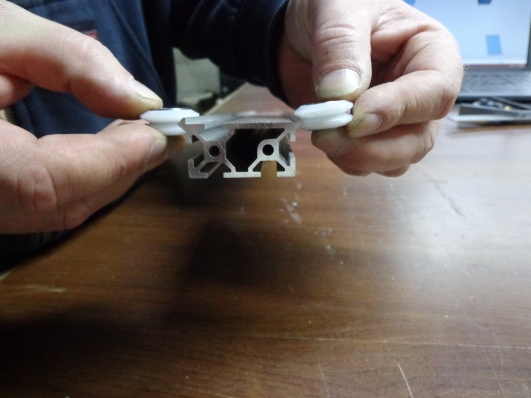 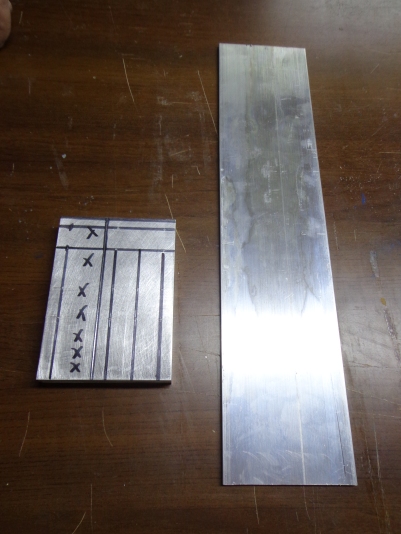 … we’ll throw in three more plates all for the price of one! 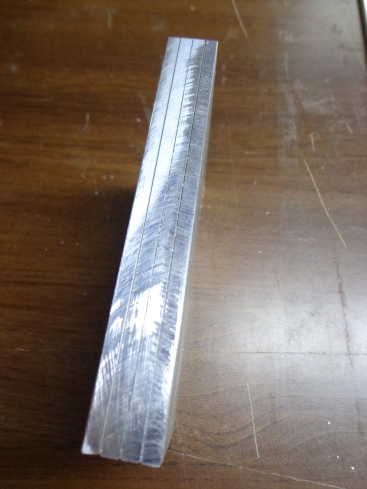 Imagine how jealous your friends will be when they see your CNC router with brand new aluminum corner plates. They will cover their ugly old ones with sawdust just to hide their shame. 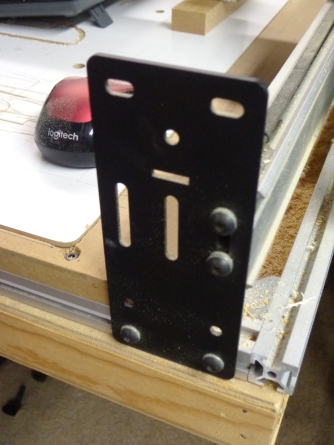 Actually, this frame is the second one that he built for this router. The first one was MUCH smaller. And is currently in pieces. 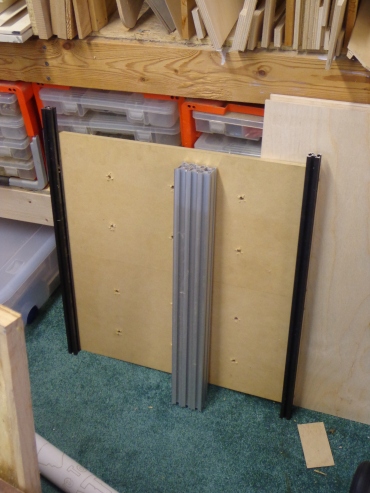 Don’t you worry! Jay will have more parts machined so that he can get this one put back together, too. After all, why have one CNC router when you can have two? 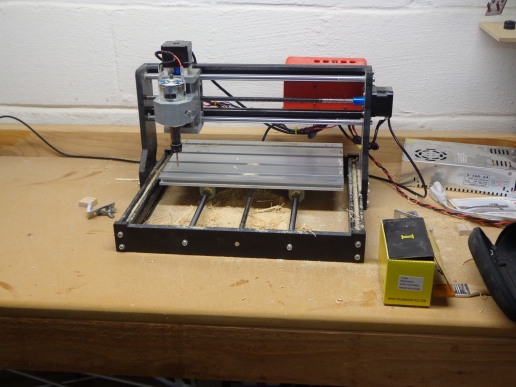 I can hear the song now…

and a Jay in his machine shop.

Okay, so it doesn’t work perfectly with the 12 Days of Christmas music, but close enough!