Lately things had been a bit rough for Gary. 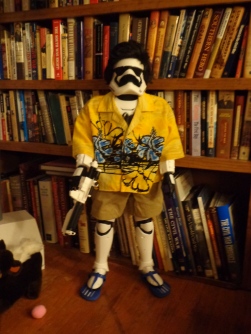 While attending a Halloween party dressed up as Gary P.I., he’d been trying to impress some ladies when he fell off of the deck railing and broke his neck. It was not good. Luckily he had been wearing his helmet!

But he spent the next few weeks in traction…

When a storm trooper’s weaker spots get injured it takes them a lot longer to heal than a normal person. He was released from the hospital, but was ordered to wear a neck brace for another month to make sure everything was healed. 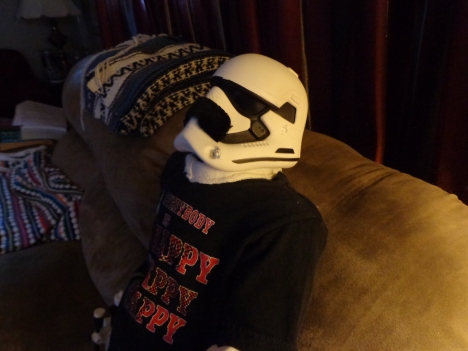 Oh, and yes, Gary kept his mustache from the Halloween costume. He thinks it makes him look distinguished and mature.

Despite his manly mustache, Gary was beginning to feel depressed. What had he really done with his life? Sure, he had a pretty nice house and good friends, but he missed the travel that came with his military career. Maybe he should take a long vacation to an exotic location. As he sat watching M*A*S*H re-runs he decided that Klinger made Toledo sound like a wonderful place. He might even be able to take in a Mud Hens game! Toledo is probably beautiful in the Fall, too!

His musings were suddenly interrupted by the ringing of the door bell. Gary wasn’t expecting anybody to stop by, so he was confused when he opened the door. 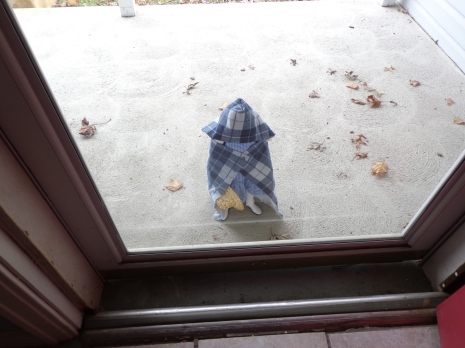 At first he thought it might be an Ewok, but then he realized it wasn’t chubby enough. Who could this be? That’s when a voice said…

He was so shocked that he didn’t stop her when she opened the door and let herself in. His daughter? She must have been about 5 years old and he’d only been out of the military for three years or so.

“Momma told me to give this to you,” the little girl said as she handed him an envelope. Gary opened it and read:

Dear Gary – Guess what? You’re a daddy! Okay, so I probably should have told you sooner, but I’ve been a bit busy. Also, you didn’t leave me your number or anything. I happened to be reading a blog about sewing and model airplanes when I came across a post about you. That’s when I realized how unfair everything has been for me. You are off on pool-side vacations and driving tractors while I’m putting my dreams on hold. I can’t be a fashion designer with a child. I mean, how am I supposed to stay out all night at parties with famous people if I have to get up and hand the kid a can of spaghettios as she walks off to school? It looks like you have it pretty good, so it’s your turn. When I’m rich I’ll try to remember to send you some money for her. Talk to you later! ~ Vivian.

Gary staggered back towards the couch. A daughter? How could this be? Then he flashed back to one of his last shore leaves. His unit had just finished searching for some droids and decided to hit up a pretty interesting cantina. As he was sipping a beer he looked over and noticed a gorgeous woman making eyes at him. He had swaggered over, hoping that he looked enticing to her, and said, “A penny for your thoughts?” She giggled and said, “It’s going to cost you a lot more than that, mister.” His buddies warned him that she was there ‘for business’, but he didn’t care. Looking back now, perhaps he should have used the money for more beer. 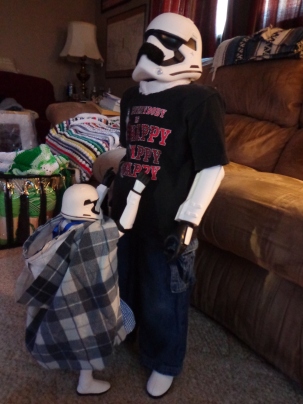 “I’ve always wanted a daddy!” the girl said excitedly. “When Momma said that I was going to come and live with you I was so excited! Pick me up! I want a hug!” 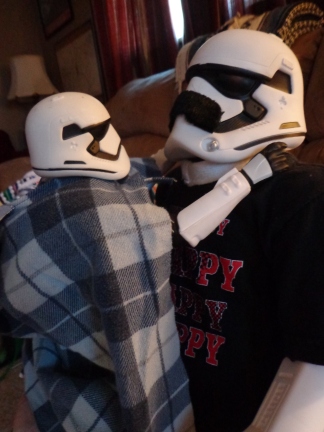 “I just know that you’re going to be the best daddy!”

Gary finally found his voice and asked, “What’s your name?”

“My name is Penny Guiseppe Nelson. Momma used to say that apparently thoughts come with a much steeper price than she had realized. I’m not sure what she means by that. But she had a picture of you that had the letters M-I-L-I-T-A-R-Y-I-D on it. I used to look at it all the time because I wondered if you loved me as much as I love you. And I have so much to tell you! There was this one time that I was walking to school…”

Penny launched into a story about a pretty rock she had found once and how many colors were running through it, but Gary interrupted her, “Penny! Slow down. You don’t want to stay with me. You must miss your momma, right?”

Penny vehemently shook her head, “Oh no! Not at all. I’ve always dreamed about having a daddy and now I do! Daddy, can I have a kitten?” 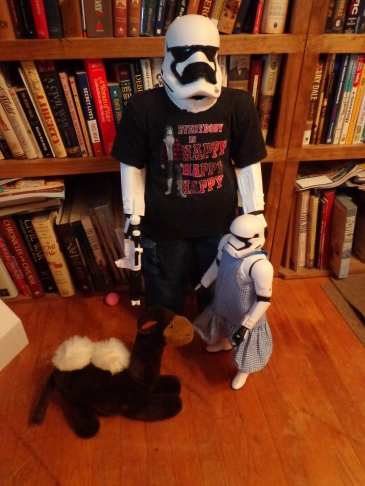 Instead of a kitten, Gary introduced her to Tina. Tina was so excited to have a little person to play with that she could barely contain herself. And Penny instantly fell in love with the miniature camel.

Gary’s mind was still reeling. There clearly was no denying that the child was his. She had his eyes and his build. He had wanted adventure, but he never thought that it would be the adventure of being a parent. Things were definitely going to be different! 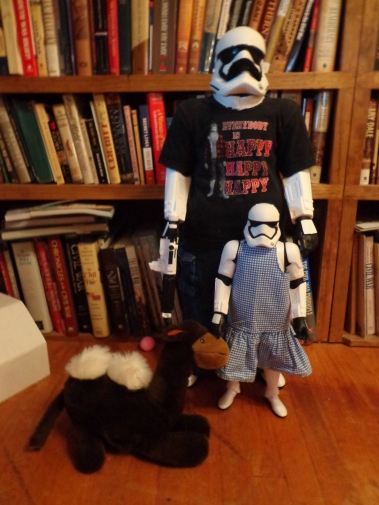