I have cut my posting frequency WAY BACK lately because a) we’ve been busy and b) a lot of what we’re working on are Christmas gifts for people who read my blog. It wouldn’t be very nice for them to see their gift online before holding it in their hands.

The birds have also been keeping me busy.

I think there are five billion of these sparrows hanging out in my front yard. On the weekends I have to fill the bird bath at least twice a day. They love to get in here and just splash all over. When you have 8-10 of them at a time, plus they take turns, that’s a lot of water being splashed out of the bird bath. Not to mention that they put a pretty good hurting on the seed!

One day, in between re-filling the bird bath, my sister sent me a picture of a woman wearing a crocheted wrap that had pockets. She said that she really wouldn’t mind getting something like that for Christmas so that she can wear it in her classroom while she teaches. She wanted it in neutral colors that would also hide any grunge that it would pick up from the kids.

The picture she sent included a drawing with the measurements. It wasn’t in English, but I could understand enough of what was going on to be able to determine the approximate size. I knew that I had similar patterns in my stash so I went hunting. I found something that I liked in a book called The Crocheted Prayer Shawl Companion. 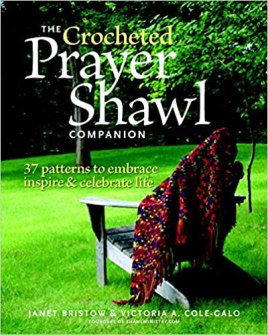 It’s called Special Occasion Shawl and calls for a main color and a contrasting color. Also, it has pockets. Not that I couldn’t have added pockets to any other shawl, but the less that I have to think about the better.

My next issue was my sister asked for it to be made in a neutral or darker colors like brown, dark blue, etc. I looked in my stash and I do have those colors, but I couldn’t bring myself to use them for my sister. Even though that’s what she requested. So I tried to compromise. What do you think? 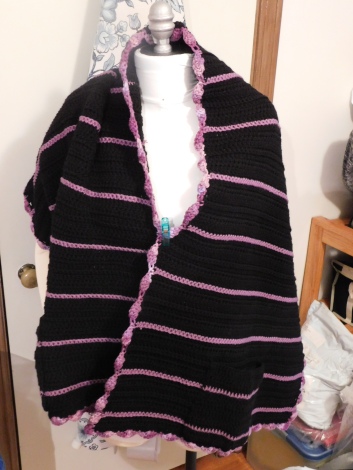 It’s not quite done because I’m going to sew a button on it in the general vicinity where I’ve clipped it together. I figure that if she’s wearing it in the classroom it would be nice to not worry about it falling off of her shoulders. Especially if she puts something in the pockets. 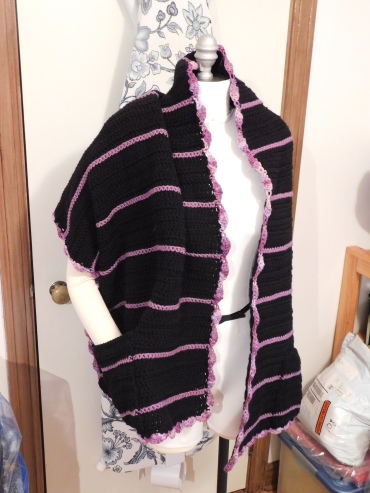 Addie was so very nice to model this for me. I even attached an arm for her to casually place in the pocket. She really doesn’t have the shoulders or neck to correctly wear it, but she did her best.

I made it a little wider than the pattern called for so that it would be cozier. I thought the black would be good for the “grunge” factor and my sister’s favorite color is purple. Do you think it’s too loud? 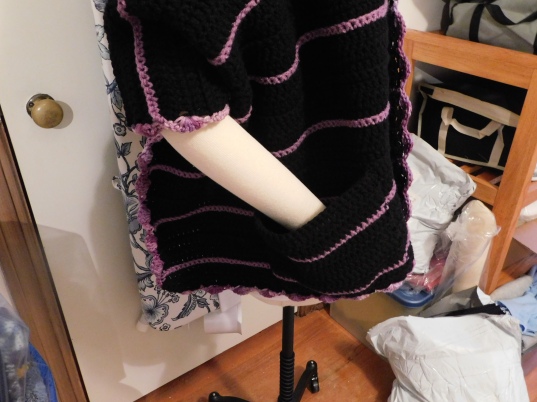 The purple is slightly darker than what these shots are showing. I’m not good enough with my camera to be able to get it to not wash everything out.

When I was done (or almost done) with this shawl I thought that maybe my sister’s stepdaughter would like one, too. She’s in the Air Force and is currently stationed in Colorado. I thought it might be something nice for her to cuddle in when she’s sitting up reading at night. I still have a lot of black yarn, but her favorite combination is black and bright pink. I looked and looked, but the only bright pink I could find was in the Red Heart Super Saver Ombre line. I had to go to a sketchy Wal-Mart in my area to get a skein of it, too.

I’m not sure if they are discontinuing it or if they are just can’t manufacture it fast enough. I couldn’t find any place to buy it online and out of all the stores in my area it was only the sketchy Wal-Mart who claimed to have any in stock.

It’s difficult to see the ombre effect in these pictures. You can kind of see it if you look closely on the left side of this picture. The body of the shawl is crocheted first and the ombre started with the lightest pink. The pocket that is sewn to that side was done at the very end, so you can see that I’d worked up to a brighter pink. Again, my camera skills are severely lacking, but I tried to get a better picture of this ombre effect.

The beginning (with the edging added at the end of the project), and the brightly-striped pocket. 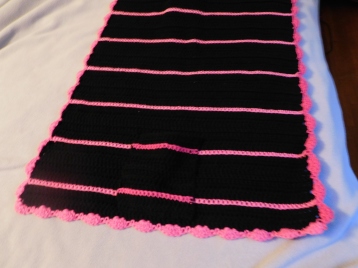 The end of the shawl. You can tell that there’s not such a large contrast between the last body stripes and the pocket stripes.

Again, I’m going to sew a button onto the pink shawl so that she can keep it on her shoulders. There’s nothing that bothers me more than having a sweater, or wrap, that refuses to stay on your shoulders. I’ve been known to tear sweaters off in fits of irritation and toss them in the Goodwill pile after I’ve had enough with them falling down my arms.