Posted on September 1, 2020 by civilwarrose5

It’s been two weeks since I posted anything. Somebody whined that I was posting too much of my crochet stuff, so I had to find time to work on non-crochet stuff. It wasn’t easy. In the last woodworking post I gave you a teaser for the next project Jay was making. 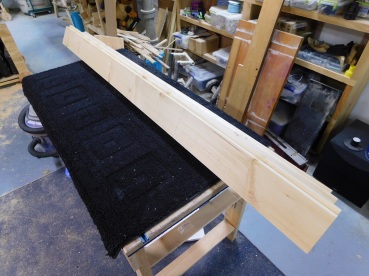 Not much of a hint, is it? Okay, what if I show you this: 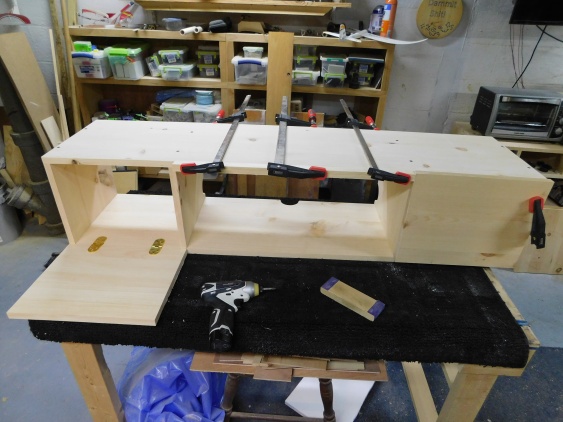 The title of the post is ‘Wooden Holders’ because the main function of the projects I will be sharing is to hold stuff. This particular project holds electronic devices that hook up to your TV. Some people might call it a floating entertainment center. Or you can call it the ‘electronic device holder for your TV’. Your choice.

Not only did Jay make the entertainment center, but he also made two shelves to accessorize it on the same wall. 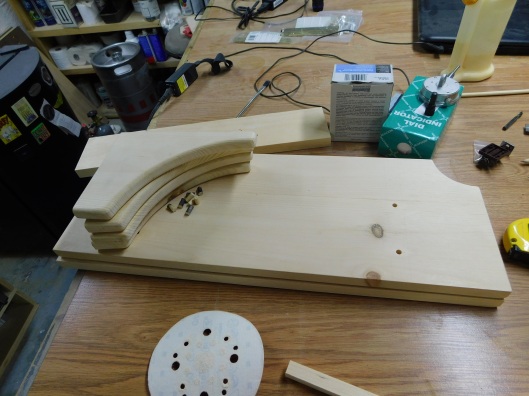 Or maybe not. The guy who Jay was making this for probably wouldn’t have been able to figure it out. After all, he is a Buffalo Bills fan…

These pieces all ended up on my finishing table. 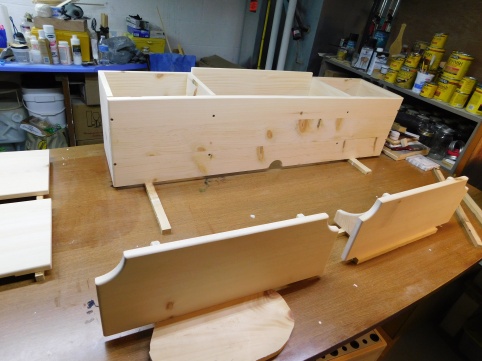 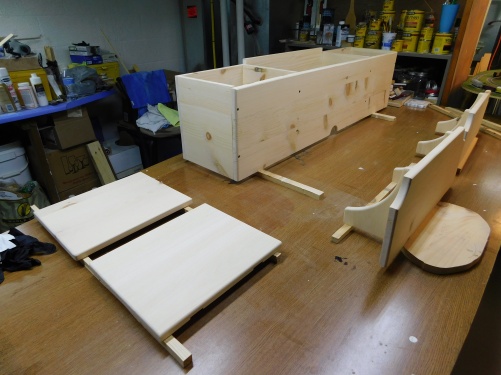 My finishing table is actually an old conference room table that Jay’s work was going to throw away. Jay had a coworker bring it home for him and then he built the support base to my specified height. That was last year. This year he finally installed a shelf on the bottom for me. 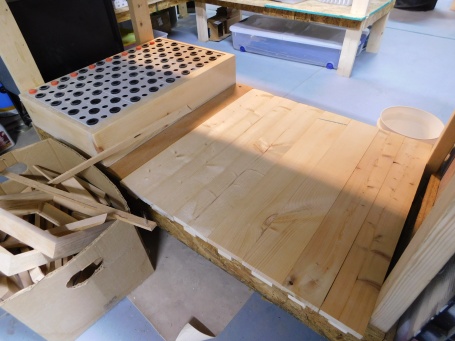 I love this table. It’s big enough to hold all the pieces of the floating entertainment center and still leave me room for an At-At. Although, it looks like he might have been hit by the plague… 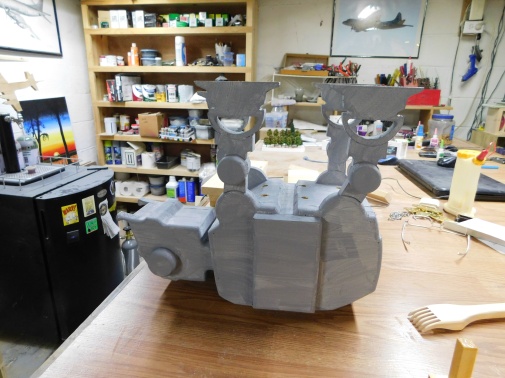 While Jay was resuscitating him I had to stain the wood pieces occupying my table. 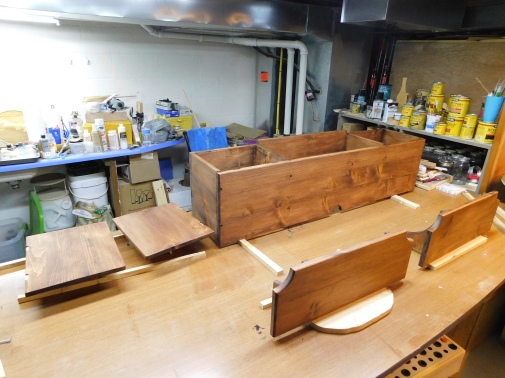 We didn’t fill in the holes left by the screws to assemble the pieces because Jay said that the guy didn’t want them filled in. Also, Jay was pretty sure that they would blend in with the stain color that was chosen. It’s called ‘Honey’. 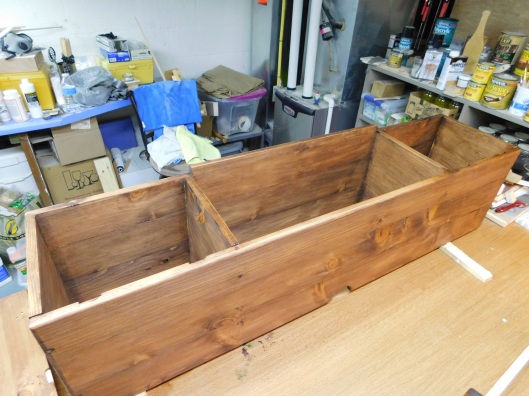 I used up all the stain that I had in this color. I was glad I didn’t need to do any touching up on it. Then came the poly. I don’t use any oil based finishes because, to be completely truthful, I’m scared of them. I know my water-based poly so that’s what I used. I had a devil of a time getting it smooth, though. After what felt like five zillion layers of gloss finish it was finally done! 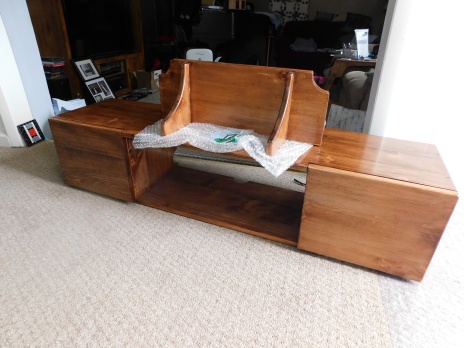 It’s not the best picture, but I almost forgot to take any pictures of the completed pieces. Jay was getting ready to deliver it when I snapped a couple. 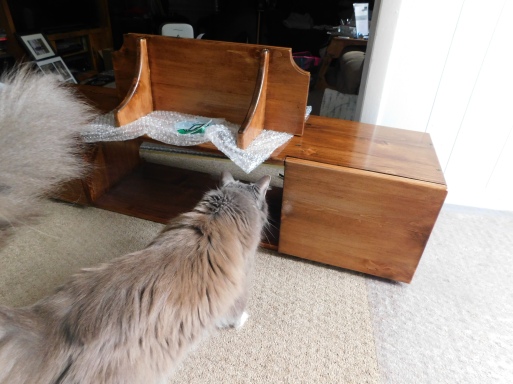 Look at the reflection on the front of it! You can see Bob’s paw. That should be very easy to dust!

Newsflash! This just in…. We have had a sighting of the TV Center in its natural habitat. Let’s take a look at the image that was captured: 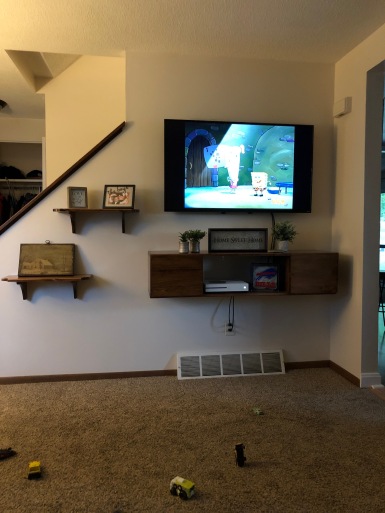 It is unknown at this time if the television program and toys are to entertain the Bills’ fan or if there are legitimately children in this household at this point in time.

Once my bench was clear I quickly found something else to put on it. 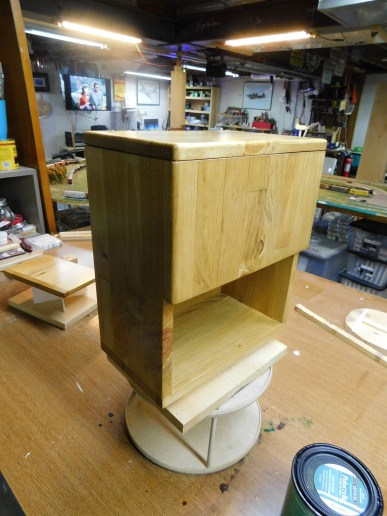 This is actually for my office at work. In the year that I’ve worked there I’ve watched the other people in the office dig around in a big box for their coffee pods (kept in the credenza with the office supplies) and then pile some of them on top so they wouldn’t have to keep digging. They also have two coffee cups on the credenza in case we have visitors or somebody forgot their cup at home. I’m tired of looking at this mess so I drew up a design and Jay executed it. 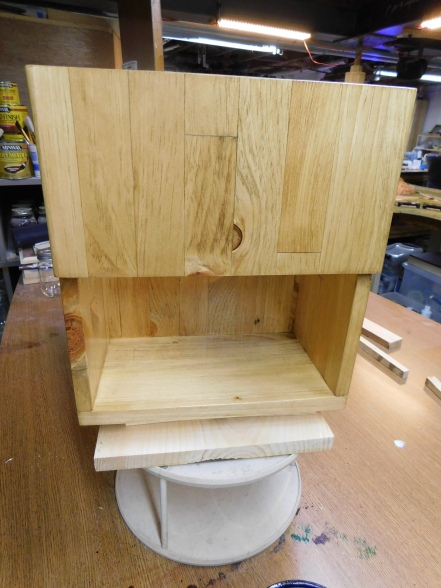 Jay glued together scraps and then used them for the coffee pod holder. I used a golden oak colored stain because the credenza top is almost the color of my finishing table. I thought they would go together nicely. 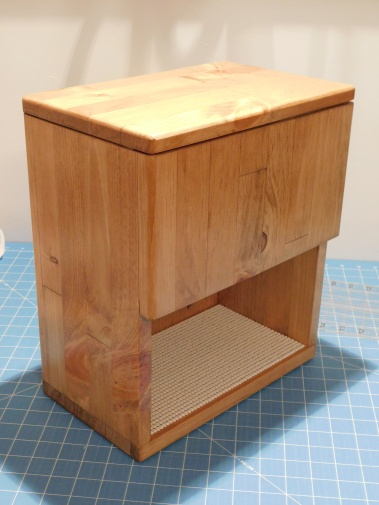 Here it is finished. Doesn’t it look nice?

I put some shelf liner in there for the cups to sit on. 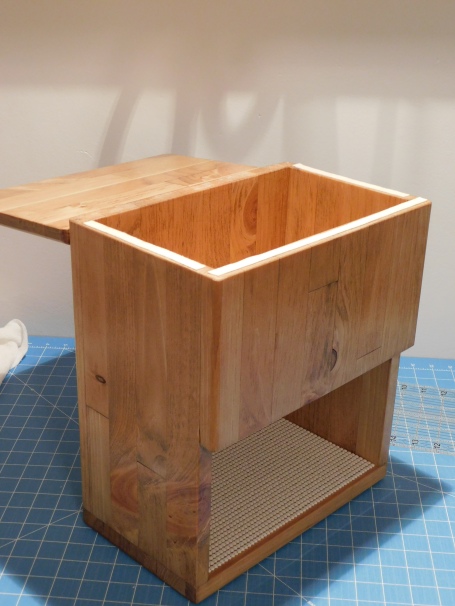 The top is hinged so that you can put the pods on the top. I glued on some felt so that the top wouldn’t bang and make noise all the time.

On the inside is a removable bottom. 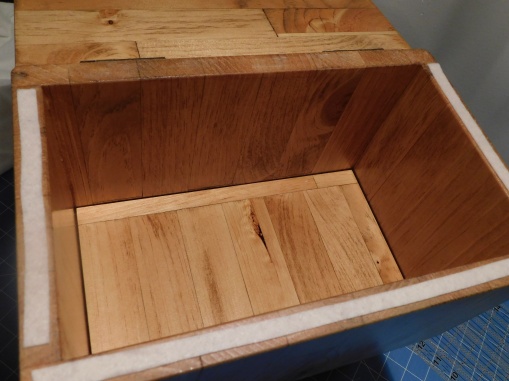 It’s removable because I somehow didn’t clearly communicate to Jay that there needed to be a bottom to it. When he thought he was done you opened up the top and looked right down at the coffee cups that would be sitting there. He wondered what the purpose was, but he was going by my drawing so he didn’t ask questions. I told him he was good enough to be able to add a bottom to it. He was. 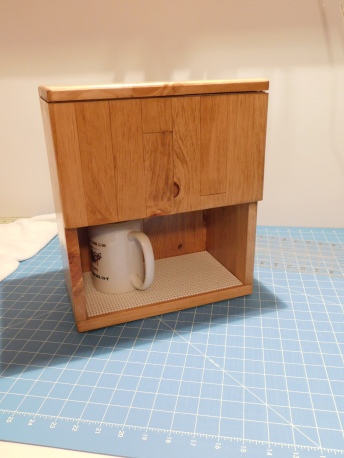 Hopefully the coffee drinkers in my office like it.

The last holder that I have to show you didn’t need to be finished. As in stained or painted. Jay finished constructing it, but the only thing I had to do was put it in place. 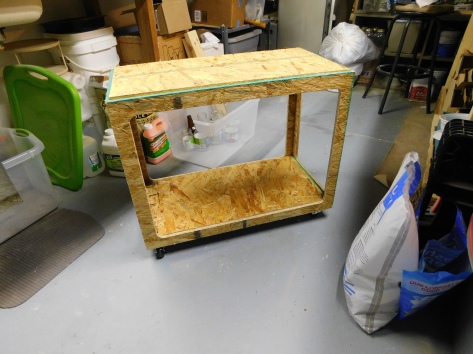 Isn’t that nice? We have a bunch of OSB left over from the Lean-To so Jay used that to make a new utility shelf for me. It even has wheels. I’ll show you why.

This was my old utility shelf: 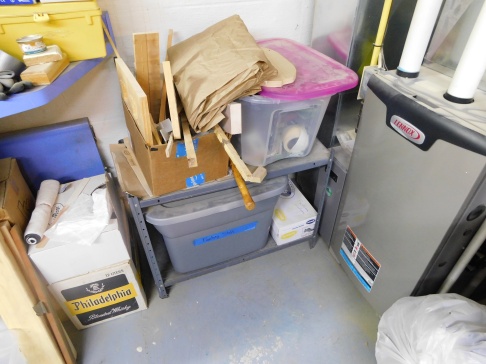 The majority of my painting tools reside on this shelf. It worked great as long as you didn’t move it. However, twice a year I have to move it so that I can change the filter on the furnace. When the furnace was originally installed we were told we only had to change the filter once a year. I like to do it twice… once before winter and once before summer. And yes, you read that correctly I am the one who changes the filter.

To put it mildly, this shelf is a piece of junk. 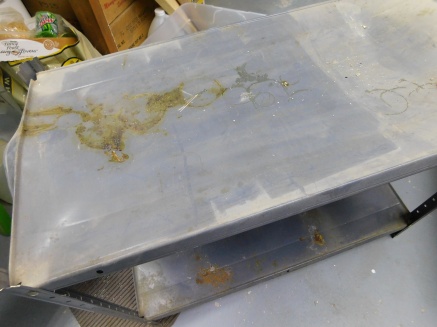 It only has about four bolts holding it together so it moves and sways like a rag-time dancer when you just blow on it. I must admit that one time when I was trying to move this shelf to get at the furnace filter I lost my temper and something went flying across the basement. It wasn’t the shelf because it wouldn’t stay in one piece long enough to get off the ground.

But now I have a shelf on wheels! 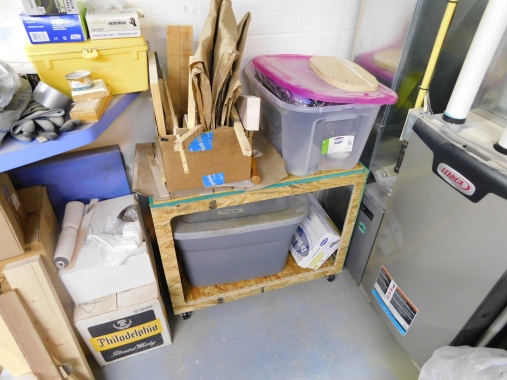 When it’s time to change the filter all I’ll have to do is just wheel it out of the way. No more cursing or throwing things. I can’t wait!