A while ago I had started to make the Rose Cathedral Stained Glass Window afghan.

I got this far before I decided that I didn’t like how it was turning out. It wasn’t laying flat and I knew if I kept going the waviness was just going to continue through the rest of it. So I stopped. I currently have this in my car as an emergency blanket. I was going to let Bob have it, since he seemed to like it so much, but Jay was horrified that I would give something like this to a cat to sleep on. 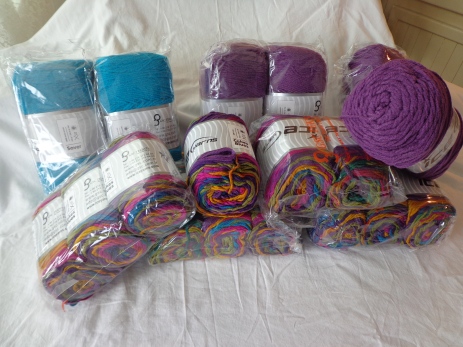 I was using Ice Yarns’ Cakes Blues – Rainbow and Saver in Turquoise and Purple. Originally I planned to make a sweater for my sister, but then I realized that Mother’s Day was coming up and my mom would probably love a big comfy sweater for the winter. I knew it was going to be a bit “loud”, but my mom can pull it off.

I used the Tammy Sweater pattern from Christa at The Secret Yarnery with a slight modification to the sleeves. I tried the sweater on to see how long I needed to make the sleeves, but they felt too tight on my lower arms. I marked the point where I wanted to start fixing the problem and then tore it out and redid it. Instead of decreasing three every row I decreased one every other row for a bit and then eventually got it down to the size that I liked.

Due to the pandemic I was limited with my choice of models, but she was cheap and available. You know what they say, “Beggars can’t be choosers.” Here is the finished sweater:

I wasn’t sure that I would have enough of the Cakes Blues to do the arms and collar, so I opted to use the purple Saver yarn to add a little interest.

I also made this one a little longer than the last Tammy Sweater I made for my friend Chrissy. My mom seemed to like it so that’s all that matters.

I have also managed to make a few more hats.

I used a pattern found in an older leaflet from Annie’s. It’s a crocheted Man’s Camo Hat by Glenda Winkelman. I found that you can purchase it as a pdf pattern here. After crocheting it I had Jay try it on and he said it was a bit tight. I really liked the brim, though, so I made a few changes.

This hat is actually supposed to be crocheted in two pieces (the crown and the brim) and then sewn together. I’m lazy and didn’t want to sew a brim on so I decided to try crocheting it on the hat as I went. After I had finished the last round I chained the number of stitches that I wanted for my brim and single crocheted. On the return row I crocheted in the back loop until I reached the body of the hat then I slip-stitched to that row, and then the row above it. I think it makes an okay hat. The rusty orange hat was made using Loops & Threads Impeccable yarn that I purchased at Michaels. I have to say that I’m not a fan. I probably will not buy this yarn again. It’s very stiff and thick. I don’t like the feel of it at all.

I went digging into my yarn stash and came up with a skein of yarn that I had purchased from Hobby Lobby. I’m not sure what the color was because the label had been missing so they had just placed a regular piece of paper around it as a band and marked the price down. The colors are really pretty and I love crocheting with Hobby Lobby’s yarn. 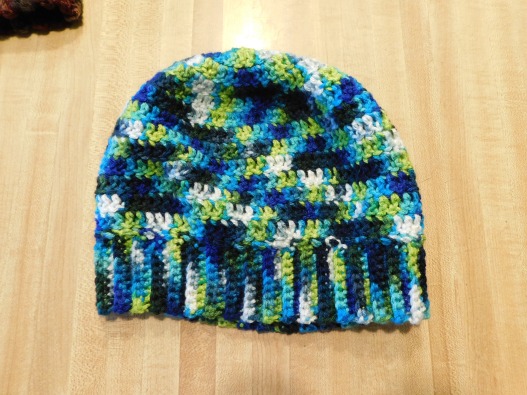 I still had about a third of the skein of yarn left, so I started another hat. I knew I wouldn’t have enough to complete it so I decided to use black for the brim.

I think it turned out really well. Fifteen down and only about twenty-five more to go…