Jay hasn’t been working on just the train layout. He’s also been doing some woodworking. The first project I’ll show you is one of my birthday presents.

While looking through the March 2020 issue of Wood magazine Jay saw a quilt display and asked if I would like one.

It’s called the Swingin’ Quilt Display because the arm swings out so you can more easily drape your quilt on it. 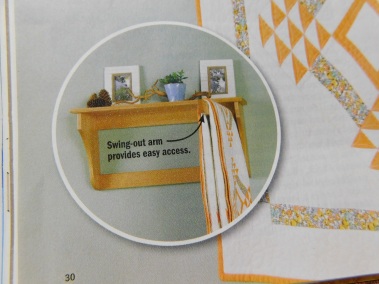 At first I didn’t know where I would put it, but then I found a spot and decided I was going to hang the double wedding ring quilt that my mom made me years ago.

It’s the only quilt she has ever hand quilted. It’s only a full size so it won’t fit on our King bed and I hate to hide it on the bed upstairs. 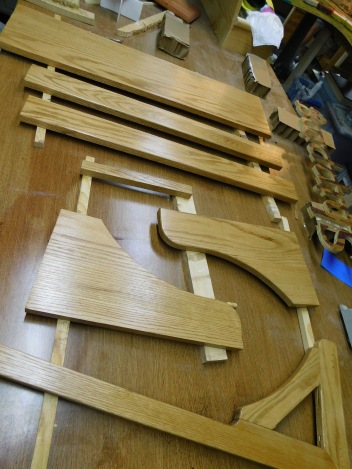 We had some oak laying around so Jay used that to cut out the pieces. They are stained and in the process of being poly’d. I hope to have these done by this time next week.

The next project that is already hung on the wall is another rack for my spools of ribbon. Jay had made two for my old sewing room.

But when we hung them up I quickly realized I was going to need at least one more.

The large one is on top with the two small ones below it.

I didn’t realize that I have so many spools of ribbon and lace!

Another project for my sewing room is a shelf that Jay had installed in the kitchen of my old house. It was bare wood, and really very cheap (I can’t recall where I bought it) so I decided to stain it and poly it. Then I’ll have Jay hang it in my sewing room. 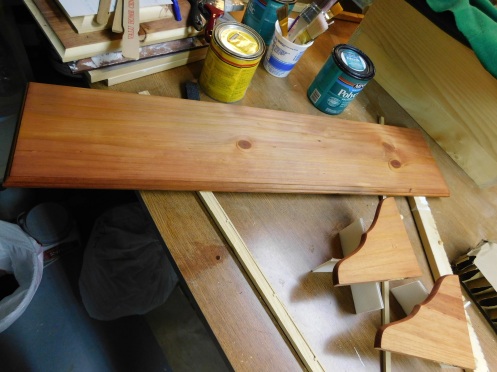 Nothing too exciting about that shelf.

The other thing that is sitting on my bench for me to poly is a sign for Jay’s work. 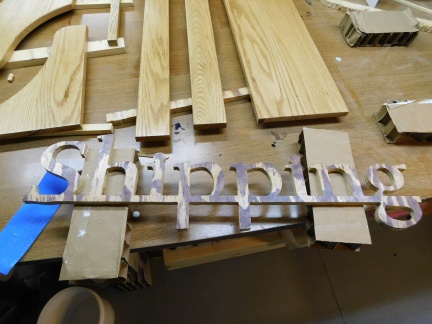 He cut this out last week, but I had to make room to finish it for him.

One other project that was made out of this wood is a set of mini corn hole boards for a coworker.

I think Jay’s router bit threw up a little in its mouth when cutting this logo. Jay is a Patriots fan and I’m a former Dolphins fan, so both of us are having a hard time with this in the house. It makes me feel ill…

The last wood working project that I have to share with you is technically one that has been done for a year. 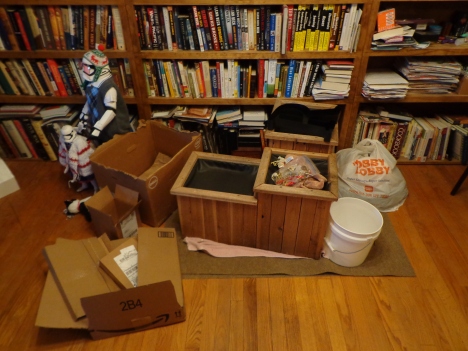 My cedar bird bath. I put it out last year, but we never ran power out to it so that we could actually plug it in. That has finally happened!

These aren’t the best pictures, but I’m so happy to have it running. After we plugged it in and went into the house I saw at least six different birds stop by for a drink.

I’ll take better pictures once I have the front gardens cleaned up and flowers planted. I definitely don’t look forward to cleaning this because it’s going to be even more of a pain than what it was prior to electrifying it. First world problems, right?

1 Response to Lots of Woodworking Projects