Have you ever said to yourself, “Self, I’m going to work on this project and I should have it done in a few hours. Then I can go work on something that I actually enjoy!” Then once you get into that project you fall into a rabbit hole that you don’t surface from for days? That’s how this project started. I noticed that we had mildew at the top of our bathroom closet. I ignored it for a week or two (I was busy!), but then decided that I needed to do something about it. The closet isn’t very big so it shouldn’t take long to fix it up.

It’s big enough to hold our towels, sheets, some quilts, and most of our toiletries. Of course, once I had emptied it out into the living room I wondered how I had fit all of it in that little space!

(This stuff is getting thinned out before I put everything back.)

I put on my Kylo Ren mask… 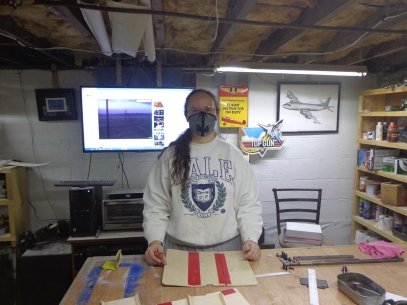 … and scrubbed the walls and ceiling with bleach water. Once they were dry I used Kilz primer specifically for kitchens and baths. I was going to call that good enough. 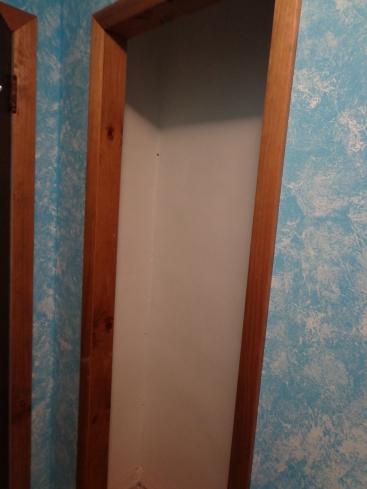 After all, it’s just a bathroom closet. It’s not going to make the cover of Better Homes and Gardens magazine. I spent Friday evening working on this and figured I could have it all back together Saturday morning, Then I could start moving things around so that I can move my sewing room downstairs!

Saturday morning I couldn’t stop thinking about the crack that remains from when the bathroom was originally remodeled after we had moved in.

We had paid somebody to tear out the old plaster and put new drywall up. He didn’t have to do any mudding (I can do that), but what I thought should have been a simple job ended up being a huge mess. In fact, after the guy left very late that night I broke down into tears. Poor Jay didn’t know what to do. We’d only been married a handful of months and I don’t think I had ever burst into tears in front of him.

I couldn’t help myself. Not only had the guy done a poor job hanging the drywall… 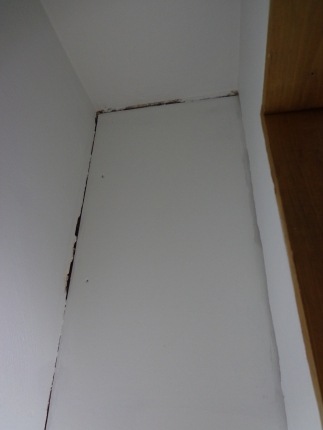 … but he hadn’t even attempted to contain the dust so the entire first floor of the house had a coat of plaster dust all over everything. Oh, and he left the toilet for Jay to put back together. Which wouldn’t be an issue if it wasn’t for the fact that we only have one bathroom and one toilet. And I had to pee. And it was almost midnight.

When I’d originally mudded and painted the bathroom I ignored the closet because it’s just a closet and I was more worried about the bathroom walls that would actually be seen. This last weekend, though, that crack kept bothering me. Not only is it ugly, but every time you bump the edge of the plaster it crumbles. There have been numerous times when I’ve had to wipe plaster dust off of my quilts or towels. So with a heavy sigh I decided to fix it properly.

I dug out my putty knife, mudding tape and mud. Now, I’ll admit that it’s not pretty. Not by a long shot. But the crack is sealed and the plaster can’t crumble any more.

And yes, we still have the luan showing on the floor. We *cough-Jay-cough* never got around to putting linoleum in the bottom of the closet. While I have the shelves out I’m going to fix that, too. I long ago threw out the extra piece of matching linoleum, so I bought some of those peel-and-stick vinyl tiles. I figure they will be good enough to finish off the closet. Now I just have to clean up the floor (since I dropped drywall mud and paint all over it) and stick them down. Also, I’ve asked Jay to find some extra molding that I can paint and put in there.

The only problem left is what to do about the shelves. The people before us used those horrible plastic-coated particle board shelves that you can buy for closets. They have started to peel and bubble, and I don’t want to put them in there like that. Jay thinks he can rough up the surface, remove the chipped edges, and then I can paint them. *sigh* I’m not happy with that idea, but I don’t want to spend almost $80 on shelves. I’ve already spent way too much on this closet as it is!

Oh, and you’re probably wondering what we’re going to do about preventing more mildew from showing up. Well, we can’t install a fan in the bathroom because we have a bedroom directly above it. I opted to get a bathroom/kitchen paint that is suppose to prevent mildew from growing, and then I bought some DampRid units to hang at the top of the closet. I hope that will be good enough to help prevent the mildew issue.

So that’s where we stand now. Once we are done I’ll post an update. Hopefully that will be soon! I want to get going on my sewing room.