I guess this first one isn’t so much a woodworking update as it is an update on a Jay project. Do you remember the Lean-To that he’s building? 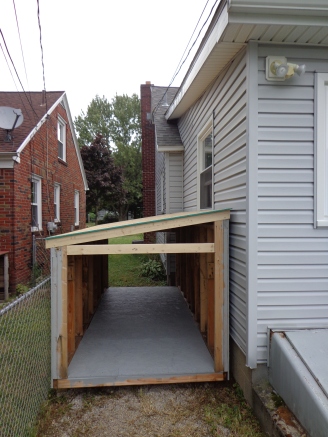 After Jay put the plywood on for the roof we had quite a few discussions. We knew it was going to take up a lot of the area (which is what we wanted), but for some reason it had escaped us that the roof would hang over the fence. Our current neighbors don’t care. However, if they ever want to sell their house before we sell ours there might be an issue with the water pouring off the Lean-To and into their yard. Also, I think the city might have it in their code somewhere that you have to have structures so far off of the property line. We didn’t want to get dinged for that and have to tear it all apart after it was full of airplanes. So we deconstructed it, took off a foot, and put it back together.

It doesn’t look like a whole lot is gone, but it was definitely noticeable when we were standing in it. The missing 13.5 square feet will be sorely missed! However, I think this gives us a better footing with both the code officer and possible new future neighbors. Now we just have to finish it before the snow flies…

Inside the house we’re still working away at projects. Jay is trying to design a Jesus Shed for church (a new creche for Christmas), and he has also been working on a box.

We were asked if we could make something to send to our Sister Parish in Mexico. There’s a group of church members heading down there towards the end of this month so we needed to make something that could be tucked away in a suit case.

Our problem was how to hinge the lid.

The lid is way too thin for even small hinges. After looking at it we figured out that we could do more of a friction fit to the top. So Jay did some re-designing and used his machining skills to turn a piece of square oak into a knob.

Here is the lid after coating it with pre-stain:

Jay asked me not to mess up the original finish that still remained on the edge, so I covered it with some painter’s tape. I used the same golden oak stain that we used on the advent wreath stand.

It’s just enough to bring out the beauty of the oak.

The bottom of the box with just the pre-stain:

And with the golden oak stain:

I think I will try to line the inside with felt, or at least the bottom. Then we’re going to include a few of the left-over Ash Wednesday crosses and some Jesus Nuts (all made from the same pew).

While I was at my finishing table I did the finishing sanding on my Tailors Press Clapper thing that Jay made me.

He had been worried about the point that was on it as it was quite sharp.

I did some rounding, some coaxing and some finessing, but I made the point a little friendlier:

(It’s a little blurry… I couldn’t get the camera to understand that I didn’t want the table in focus, I wanted the point.)

So that’s how things are going in the workshop so far!