Rain had been in the forecast for the weekend, but by Friday night the Weather Channel was telling me that there was only a 10% chance of rain. Great! I can spend all day Saturday trying to clean up this mess:

I was at the nursery by 8:05 Saturday morning and managed to buy all of my vegetable plants, plus another rose bush (I can figure out where to plant it later). As soon as I got home I started ripping and tearing. I had just finished turning the soil where I wanted to plant the cucumbers when it started to rain! It had been cloudy, but there was only a 10% chance of rain! GRRRRR. I finished planting my cucumbers and zucchini in the soaking rain, then went in and showered. I was NOT a happy camper. The sun was bright and shining when I got OUT of the shower! Except now everything was wet and muddy.

I needed to put myself in a happier frame of mind, so as I waited for the sun to dry out the dirt I decided to tackle another mess that I had been avoiding… 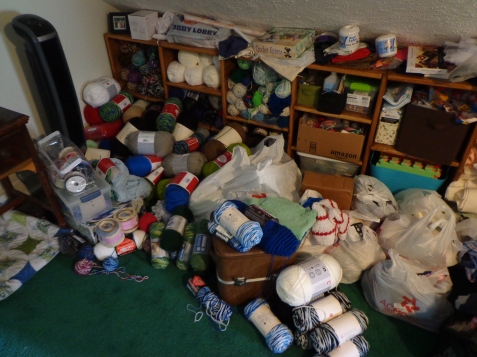 Isn’t that horrible?! Yes, it really did look like that. I would buy yarn and just toss it on the pile. Or, once I had finished a blanket, I would toss the yarn that remained on the pile as well. Since I couldn’t work inside I decided to work in here.

I used a Jumbo Ziplock Bag for the baby yarn so that I could easily keep it separate. I love these jumbo bags! I usually buy them at Wal-Mart and then put the Project Linus blankets in them after they are washed and de-furred. Since they zip closed I feel better knowing that stray hunks of fur are not going to make it into the bag. Also, once the blankets have been delivered to Project Linus they can easily be reused.

Once the baby yarn had been separated, I used the same process that I always use to kit up more blankets. If I could get some more yarn kitted up then that should leave me with less yarn just sitting around. Right?

I have 14 blankets kitted up and ready to be crocheted. I’m a Cost Accountant, so earlier I broke down the numbers as I was telling my coworker about this project. At that point she responded, “Wow. You sure can tell that you’re a Cost Accountant!” Yes, it is that scary. So, here we go…

If an average skein of solid yarn is 7 oz, that means I will have the equivalent of 72.72 skeins of yarn in these blankets! If you take into account that most of the yarn I use is variegated, they are typically 5 oz skeins. That would give me 101.82 skeins of yarn!

If I average out those two numbers, that gives me 87.27 skeins of yarn. Do you realize what that means?? I have around 87 skeins of yarn that are ready to be crocheted! After kitting up all of those blankets I should have very little yarn left in my cubbies, right?

WRONG! This is the yarn that hasn’t been spoken for, yet. Theoretically I could kit up more blankets, but I’m running out of room for the bags. I had Jay pick up a few totes so that I can store the bags for now, but good grief! I think that I might need to attend a 12 step program for my problem! I think that I might be able to crochet one blanket every month and a half. That means technically I won’t have to buy blanket yarn for almost 2 years! YIKES!!

In the midst of this organizing I realized that I have a lot of partial skeins that were becoming quite a mess. So I grabbed the yarn swift that Jay made for me and my yarn ball winder. I decided it was time to give them a try as I haven’t used them at all.

That’s quite the basket of messy yarn, isn’t it? I also have an electronic kitchen scale so that I can mark down the weight of each yarn ball (I use that information when figuring out my blankets).

First, I started by weighing the yarn before winding it.

Next, I needed to wind it onto the swift. Since these used to be skeins I couldn’t neatly place it on the swift (like almost all of the information states to do when I was looking up how to use yarn swifts earlier). I knew that I would have to guide the yarn out of the skein without it knotting and get it to stay on the swift. I solved this with masking tape.

I just needed it to hold it while I started to wind the yarn.

So far, so good. While I was doing this step Jay stopped by to visit. He has decided that he needs to add a stepper motor to my swift so that it can automatically wind while I guide it out of the skein. We’ll see how that goes.

Once the yarn was on the swift I threaded it onto the ball winder and started cranking away.

Holding the yarn with my left hand helped to keep tension and to control the yarn a little better as it came off of the swift.

This ball winder makes center-pull balls, which are what I prefer.

After I removed it from the winder I weighed it again to confirm the original weight. 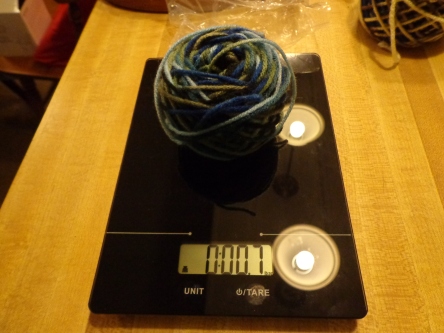 Cutting the yarn color and description off of the label I would also include the yarn brand and weight. The label then gets stuffed in the middle and I go onto the next ball of yarn. Currently I have three down… a bunch more to go.

I am really pleased with how nicely the swift and winder work. The only bad thing about the set-up is that I have to bend over quite a bit. It would be nicer if the table was a bit higher. If I would clean off my kitchen counter I might be able to use that surface. That would be the ideal height.

So I guess all I need now is for you to wish me luck. It’s going to be a full time job just to use up all of that yarn and feel like I’ve regained some control over it!