Since my post wishing everybody a Happy Star Wars day I’ve had a TON of questions regarding Gary.

Who is he? Where did he come from? Why is he appearing on the blog? What is his favorite color? Plus many other questions too numerous to mention. So, without further ado I give you everything that I know about Gary.

Gary T. Nelson was born in April, but we don’t know what year as his parents weren’t good with numbers. Or names. He was named after his dad just so that they wouldn’t have to remember any additional information. To be fair, we’re not even sure he was actually born in April… that was just what his parents told him. This is also the only picture that was ever taken of him prior to embarking on his military career.

Gary feels that he had a normal childhood. He did what all boys his age did… played tag, traded football cards, and set off railroad crossing signals for fun. He didn’t really apply himself in school, though. Instead he dreamed of the day he could become a Jedi knight and wield a light saber! After all, the girls all fall for guys with big light sabers.

As he sat for the ASVABs he pictured how handsome he was going to look in his Jedi robe! He was mentally saving the day with his quick reflexes and Jedi mind tricks. Life was going to be great! He flew through the test and waited for his assignment (as that’s what happened at that time when you took the ASVABs). Pretty soon the call came in and he had been recruited by…

The Army???!! No way! He was definitely Jedi material! When the recruitment bus stopped at his house to take him to boot camp he tried a mind trick on them, “This is not the cadet you are looking for…” and waved his hand around. They just laughed and tossed him onto the bus. The Imperial Army doesn’t mess around!

Gary had no other options so he remained in the Imperial Army and graduated from boot camp: 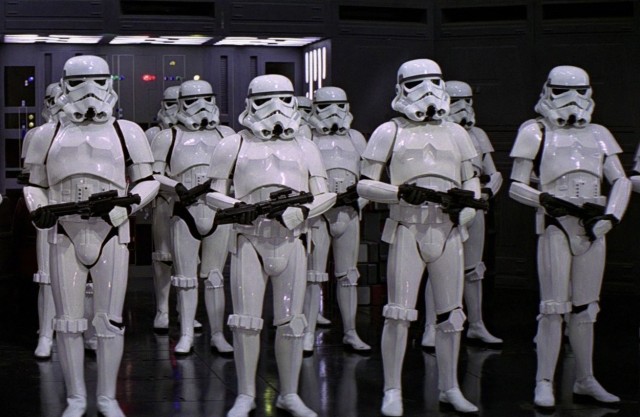 After a few years Gary grew very disillusioned with the military service, but he was stuck. He’d signed a contract when entering the service that only released him after 25 years of service. The punishment for going AWOL, or breaking the contract altogether, was death. That really wasn’t an appealing option.

What’s a guy to do when he thinks his boss is a big jerk? 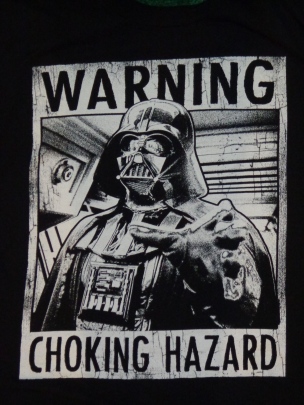 What do you do when you feel like just another white-clad storm trooper in a sea of storm troopers? You do as little as possible. That’s what. A lot of people think that the storm troopers were really bad shots and that’s why they always missed whatever they were shooting at. Nope. They were missing on purpose! They couldn’t leave their job, but they really didn’t want to further the Empire’s cause, so they just pretended to be bad shots. Management had such low regard for the storm troopers that the ruse worked and the storm troopers were thought to be mindless pawns. And that’s how Gary survived until he finally reached the age when he could retire.

After he retired he didn’t want to do anything for a while. He just wanted to have fun. It was the first time he could actually dress up for a Christmas party!

Then he was excited when his favorite football team went to the Super Bowl! 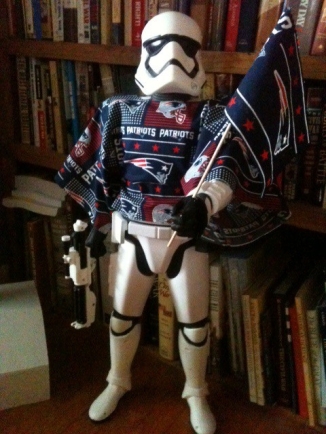 Things started to go downhill from there, though. The Patriots lost the game. Then Gary started running out of money. He tried to get some part time jobs, but when people found out that he had formerly been part of the Imperial Army they refused to hire him.

He caught a break when the neighborhood bar was in desperate need of a bartender. 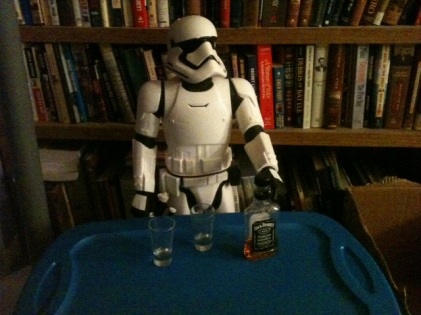 Unfortunately, an armed bartender tends to scare the patrons away, so he wasn’t employed for long. 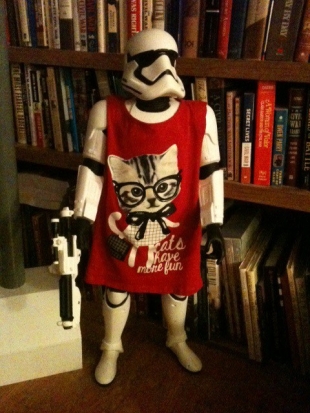 He was hanging out on his front porch, wearing cast-off clothes and waving his gun wildly at people as they walked by. As he looked in the mirror and realized that he was wearing a shirt with a CAT on it he broke into sobs and cried helmets-full of tears. What had gone wrong? Why had he ended up such a broken wreck of a person? Was it all so hopeless that this is what remained of a formerly idealistic dreamer?

Then the voice of his former boss broke into his misery, “I find your lack of faith disturbing.” And that was all it took. Gary picked himself up and started working towards his dream of becoming a Jedi knight. He didn’t know how long it would take or if he would ever accomplish it, but he knew that he had to do or do not as there is no try. So he did. Do, that is. I mean, he did do and he didn’t just try to do.

You can rent ‘Yoda’ by the hour, or by the day. He does birthday parties, family reunions, bar mitzvahs and corporate motivational meetings. He is also available as an Uber driver on the weekends. For a slightly higher fee he will wear the Yoda costume while Ubering you around town.

And that, my friends, is the story of Gary T. Nelson.

This entry was posted in Gary, Humor and tagged Gary, Humor, Storm Trooper. Bookmark the permalink.