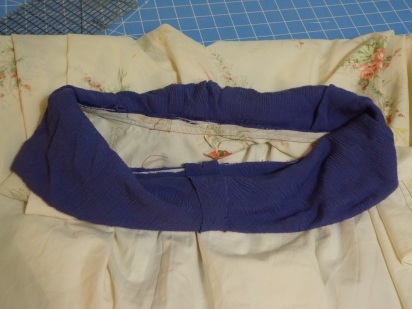 Where do I begin to tell a story of how finicky a collar can be? A true painful story that is older than a week? Where do I start?

(Extra points to you if you know which tune you are supposed to use when singing the above words!)

The rolled collar was the part of this entire project that I was most dreading. The practice one had not gone well at all, and I didn’t want to mess up the real one.

Jay tried to help by using his CNC laser to cut out my pattern so that the curve would be perfect.

First I cut out the pieces from the rayon material.

Then I used the same pattern to cut out pieces of interfacing. Rayon doesn’t have much body to it and I needed the collar to stand up a bit on its own. I didn’t want it too stiff, but it definitely was going to need help.

This was iron-on interfacing so I spent a long length of time adhering the interfacing to the collar material. That seemed to take forever. Then, with my book laying open at my feet, I began to slowly follow each step in order to get this collar to work perfectly.

Things did not go so well…

I went to sew the two pieces together and realized that yet again I had messed it up so that the seam would end up being on the OUTSIDE of the collar. At this point it was 10 p.m. so I decided to toss it off to the side for the night. I was so frustrated with myself that I knew I wouldn’t sleep, so I proceeded to watch a cheesy movie on The Hallmark Channel… for another two hours (it was a late night!). 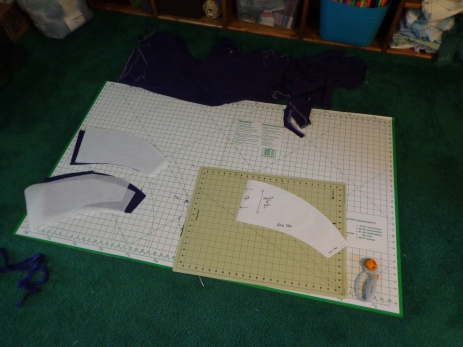 The next morning we rushed home from church so that I could get started on this again. I was so close to being done! And I had just enough material left to make one more attempt at it. So, once again, I cut out the material, the interfacing and adhered them to each other. I then started the process of sewing the two pieces together. As I was pinning them I decided to look at the collar from the night before so that I could do the OPPOSITE of what I had done. Except… as I looked at the ‘bad’ one I realized that it wasn’t bad at all! It was perfectly fine! WHAT HAD I BEEN THINKING??!! Now I had just wasted four hours in finishing this stupid chasuble! (Two hours watching the cheesy movie after I got irritated and then another two hours making a second collar).

Since I was farther along on the ‘bad’ collar I tossed aside the one I had started that morning and continued following the steps in the book. Eventually the collar was sewn to the body of the chasuble and I hand-stitched the overlapping piece of collar in place to give it a nice finished edge on the inside. Finally, it was done!

Once again I asked my model to show it off.

I reminded him that the priest would be wearing this.

The collar turned out okay. And I was told that I was the only one who could see the imperfections. 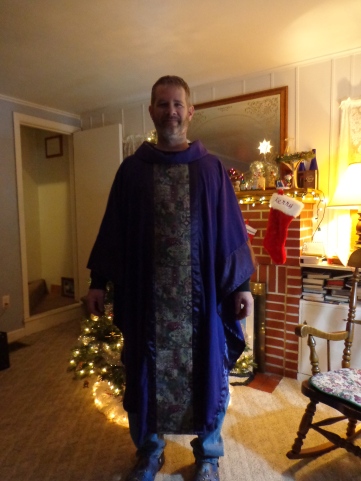 Our priest seemed happy with it. I did tell him that he would definitely need to bless this vestment before wearing it because I had done a LOT of cursing at it while sewing. He chuckled and said he thought it would be okay.

This entry was posted in Catholicism, Faith, Sewing and tagged Advent, Chasuble, Sewing. Bookmark the permalink.