This was our blank purple canvas. Depending on what type of person you are you could look at it in a couple of ways. One person might think that it’s quite exciting to have so many different variations at your fingertips from which to choose. Another person might be frozen with anxiety wondering how in the world are they going to make this look good? I was person number two. I have zero fashion sense and zero ability when it comes to decorating. In complete seriousness, all of the pictures on the walls of my family room were placed in those spots because there was already a nail in place. I never make sure that the pillow cases go with the sheet sets as I’m making the bed. And most knick-knacks are yet another thing that I have to dust. Not to mention that I’m perfectly fine with this residing in my library:

So when it came to putting some kind of adornment on the chasuble I leaned heavily on Brandon for suggestions. I kept telling him that I didn’t care what went on it, just tell me what to place where and I will sew it on.

He had been given some material that he had initially been excited about using, and his thought was to put a giant runner down the front: 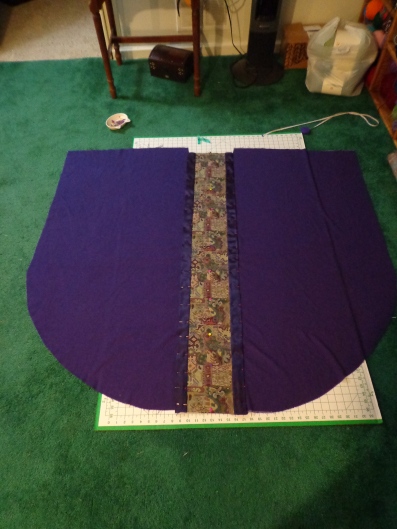 I suggested the purple polysatin to give it a little bit of shine and enhancement. I also cut a few more strips so that he could see the same fabric in a different layout: 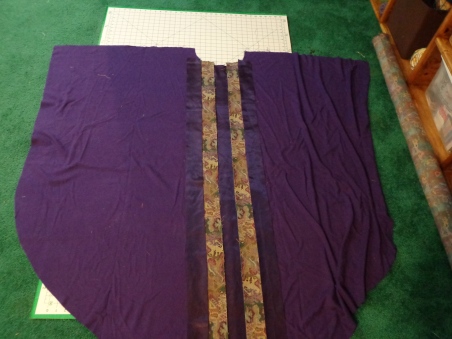 This one did not receive a good response.

As Brandon continued to look around for other ideas he suddenly questioned the original material. Did we really want to use that? Should we try something else? One of the examples that he sent to me had a chasuble that somebody had adorned with what looked like cotton batiks. So I went to the fabric store and picked a batik that had advent colors in it.

This was voted down because it looked too feminine for our priest. If we had presented him with this chasuble I’m sure he would have asked if he could wear the practice chasuble instead.

We were getting down to the wire so I told Brandon that I was going to use the original layout and he would have to just learn to like it. Sometimes you have to be forceful with him or else nothing will get done. 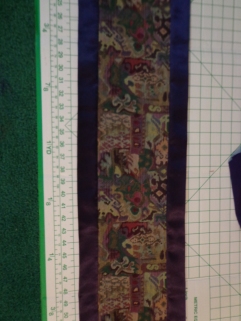 To get a nice finished edge I cut the side satin pieces about twice as wide as I actually wanted them to end up being. I then ironed them in half, opened them up and ironed each side in towards the ironed fold. Then I slid one on each side of the runner and sewed one line of stitching all the way down. Remember that I have a front and a back, so I had to do this twice. 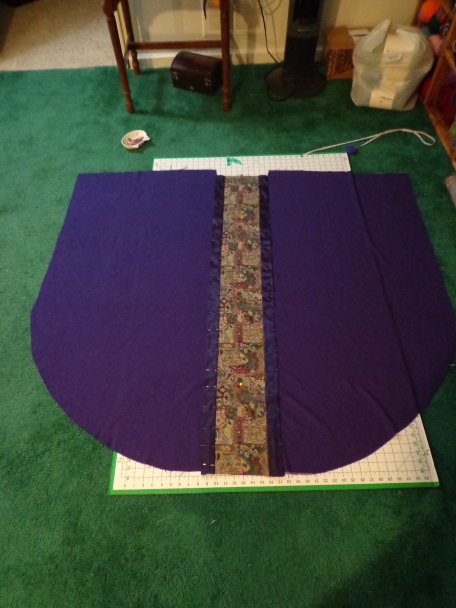 Once the front panel has been sewn together you need to place it on the body of the chasuble and sew it down. HA! Technically you want this to hang straight, so I spent about a half hour measuring all over this material to make sure that I had it in the exact middle. Then I pinned it in place, measured a billion more times, and finally took it to the sewing machine.

Here’s an interesting aside… I thought I was being smart by adding some tissue paper to the underside of the areas where I was sewing. You see, since the top part (directly in contact with my presser foot) is slippery and the bottom part (directly in contact with the feed dogs) is stretchy I hoped the tissue paper would keep the feed dogs from stretching the fabric out and making it pucker. Yes, I used a walking foot, but I thought I was being smart. Now, in all of the videos that I’ve seen this done NOBODY curses as they remove the tissue paper. They make it look so easy! *sigh* I got as much of it out of the stitching as I could, but you can still see the lines when you look at it. Grrr.

The other thing that Brandon wanted to add was some enhancement to the sleeves. After all, this is a fancier chasuble so we didn’t want it to be too plain.

More of the satin was cut and added to the edges.

Here’s some more honesty for you: I was NOT happy with how this turned out. The satin was more puckered than I wanted and I felt like the whole thing looked like it had been made in some high school Home Ec class. Yet again, I was reminded that this project was probably a bit above my skill level. Yet, I had to soldier on because there was no turning back. Purple strips were sewn to the other side, too. 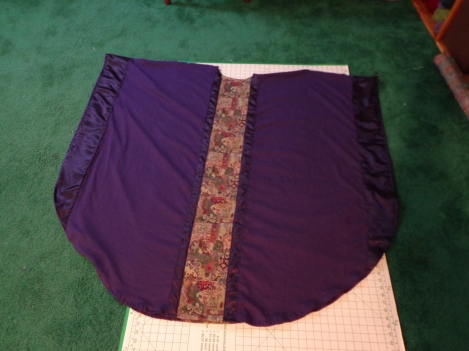 Once both sides were decorated I could then sew them together. Except, these had to be mirror images of each other and I wanted all of the strips matching perfectly at the seams. I wish you could have seen the look of astonishment on my face when I laid both halves together and they matched up perfectly! I used a french seam to give it a little extra strength. After all, all of the weight from the garment is pulling on this seam and I didn’t want it to tear or stretch.

To hem it I folded it over a quarter of an inch, ironed it, then folded it over one more quarter of an inch and pinned and ironed it. Then I did a single machine stitch all the way around. Let me tell you what, there was a LOT of material to deal with at this point. I had at least six yards of it pooled around my feet. Oh, and in this picture you can see what I mean about the tissue paper remaining in my stitches.

I think that’s enough for now. The big reveal will be in the next (and last!) part.

This entry was posted in Catholicism, Sewing and tagged Advent, Chasuble, Sewing. Bookmark the permalink.