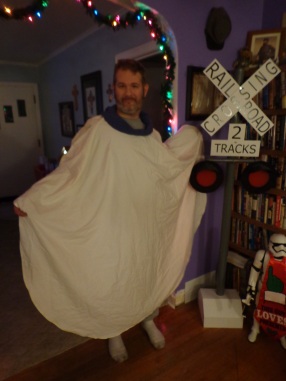 If only I could have stopped right at this point in the process. I had already made one chasuble, did we really need another one? This one had some purple on it, so shouldn’t that count? Apparently not. 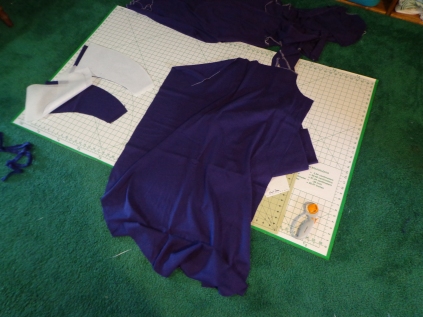 I had seven yards of fabric on a bolt that I needed to wash and pre-shrink. I wanted to make sure that any extra dye would be stripped from the fibers so that the color wouldn’t run if the priest began to sweat or managed to get it wet while wearing it. I didn’t want to wash the entire uncut length all at once, though. I was afraid that it might get caught around itself and then not wash or dry properly. So I needed to cut it into the pieces that I would use for cutting out the front and back. 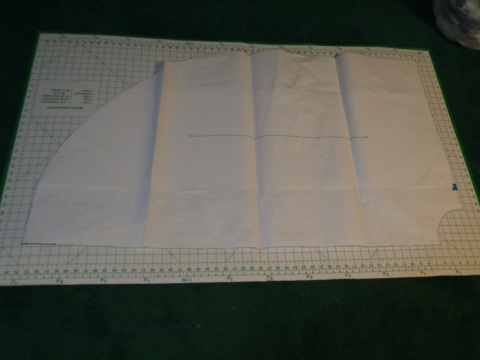 I had already washed and dried a separate piece of this fabric (which I had purchased for this exact reason) so that I would know in which directions it would shrink. This way I would be able to know where to add extra length when rough-cutting it. Now, when I had first told Brandon to buy seven yards I figured I would have about a yard left over. When I laid the pattern down and added the needed length, I was shocked to find that I had about half a yard left for the collar. YIKES! That was cutting it a bit close! (no pun intended)

Using clips I had marked where each cut would need to be made on the seven yard piece of fabric. I double and triple checked the sections against the pattern. I moved the clips a little here and there. And then I took my scissors into my hand… and spent 10 minutes convincing myself that I had measured everything out perfectly. For 10 minutes I stared at this swath of purple on my sewing room floor in all of its perfection, trying to reassure myself that I would not mess it up. To be completely honest, I wasn’t completely convinced but I knew I had to start on it in order to get it finished in time for Advent.

Once they were preshrunk and I laid the pattern out on the fabric I figured I was golden. Except, one or two of them were VERY close to not fitting on the panels. It’s all good, though, and all four pieces were cut out. 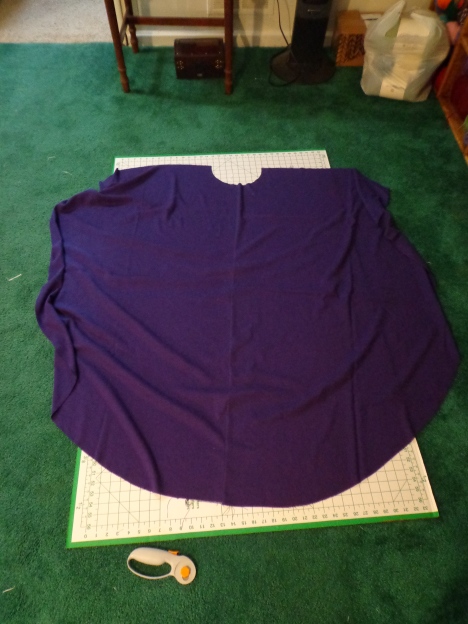 I sewed two quarters together for each half. And this is where I made my first mistake that made me want to kick myself. I didn’t want to have the seams unraveling and making a mess, so I was going to sew a french seam. As I was making the first seam I was halfway through the first pass when I stopped dead in my tracks. I was so stupid!! Do you realize what I did?

The practice chasuble was made with the front being one piece and the back being one piece. I didn’t have enough fabric to do that with the real chasuble, though, so I had to cut it into quarters and create a seam on the front. Can you guess what I forgot to add into my calculations? If I had continued with the french seams it would have shrunken the opening for the head by 2″ total (I was using 1/4″ seams). That would be an inch on the front and an inch on the back. Now, I love our priest, but he has a decent-size head and I would hate to create an issue where it was difficult to get the chasuble over it. So out came the seam ripper… and some very bad words.

I decided the easiest way to sew the seam and to prevent unraveling would be to use the serger. Which was fine, except I only had white thread. At this point I didn’t care so I just did it. Then as I messed with the front and back I worried that the white seam would be able to be seen when the priest was wearing it. If he was at the altar presiding over communion and he turned in such a way that the seam could be seen on the inside… I would be beside myself. So, I had to cover that up. Luckily I have a lot of bias tape on hand in all different colors. I found a dark purple and stitched it over the seams. I had to do this before adding the ornamentation to the chasuble. More bad words were said at this point, too.

In the next post you’ll get to read all about the fun of deciding how to adorn the chasuble. Doesn’t it sound so exciting?!

This entry was posted in Catholicism, Faith, Sewing and tagged Advent, Chasuble, Sewing. Bookmark the permalink.

1 Response to An Advent Chasuble – Part 3