I’ve heard that some people are lamenting the fact that I haven’t been posting every day. Now that we have good weather I spend a lot of time gardening and doing other projects that you don’t want to see pictures of every time I do them.

But if you want to see more pictures of my gardens I will certainly accommodate you. Otherwise you’ll just have to be patient.

Every year Jay and I decide on one or two major house projects that we want to accomplish over the summer. Last year it was the porch and the shed. This year we decided on new windows for the living room and family room, plus we’ll be getting to the fire pit area later this month.

This is the window I wanted to replace. It is huge. If I remember correctly it was 68″ x 72″ so I knew that it was going to be a bit pricey. 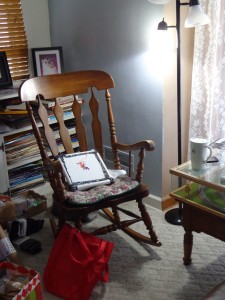 I sit by this window when I cross stitch, but in the winter it always feels so cold. Even if I’m wearing a sweater I still end up chilled. This window was original to the house when it was built in 1950 and it had the storm window on the outside that you would have to remove in the spring and put back up in the fall. We never removed it, though, because I was always afraid that we wouldn’t be able to get it back on or something would happen to it. 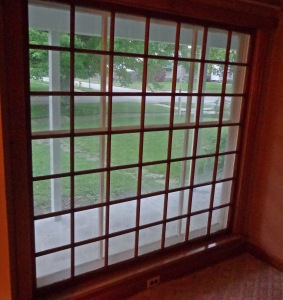 In this picture you can see the white of the outside storm window.

We ordered the window back in April and they finally came to install it this past Wednesday. I took the day off of work so that I could be there during the installation.

They do everything from the outside. These guys never removed a single piece of molding from the inside. In fact, I was surprised because they had this entire window removed in about 15 minutes. While they worked on this window I shut the cats in the sewing room so that they couldn’t wander out the window. 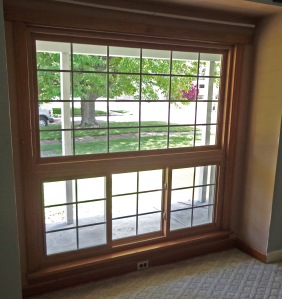 This is the new window! I’m still getting used to it. I wanted to be able to open the window for fresh air so I didn’t want another solid pane of glass. I didn’t really want double hung windows in there because I kind of wanted the same look that the old window had. I was afraid that with double hung windows the wide bars between them would look odd.

So we decided to go with a solid picture window on the top and sliders on the bottom. Actually, the sales guy wanted to put the sliders on top and I told him no, I wanted them on the bottom. That way the cats could sit in them and enjoy the fresh air, too. Besides, if you’ve ever had a cat you know that if there’s an open window they want to sit in it. I could just see them launching themselves at the top of the window in order to sit in the open windows if they were on top and I didn’t want to deal with that. It’s going to take a little bit to get used to that wider bar in the middle of the window (the divider between the picture window and sliders). When you sit in the rocking chair it’s okay because the bar is below eye level. Sitting on the couch, however, puts the bar smack dab in your eye sight. Perhaps that just means that we need a slightly taller couch… 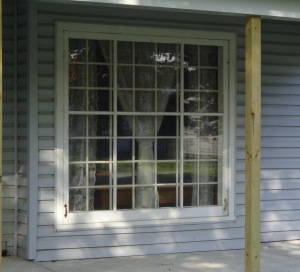 Due to that divider bar the window looks a bit squattier, but overall not too much of a drastic change.

That wasn’t the only window that we replaced. We also decided to change out the window in the family room. 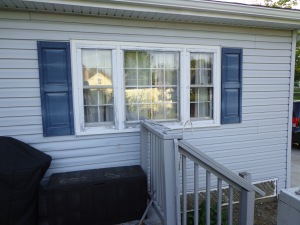 This is the old window. It doesn’t look that bad from this distance. When you get up close, though, you see the problem:

You probably can’t tell, but this is horse hair weather stripping. Yes, HORSE HAIR. Now, if you’ve lived in an old house or worked with older furniture you know that horse hair was used as a binder in plaster or it was used for stuffing furniture. Apparently they also used it for weather stripping because not only was it used in this window, but it is also used on my front door (which I think is going to be next year’s project). 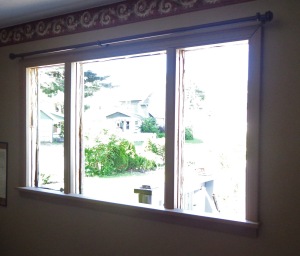 It actually took these guys longer to get these three windows out than it did to get the big one in the living room out. I suppose there could be many reasons for this, but based on the knowledge I have of the guy who built the house my theory is that the guy just did a horrible job putting the window in and they had a hard time getting it out. Let me remind you that the guy who built the addition didn’t put any insulation in the ceiling below the roof and he didn’t use the correct hardware when laying the plywood down for the roof. Oh, and don’t get me started on the shed that he built…

…with the metal roofing laid on it SIDEWAYS so that the ridges caught the water and brought it INTO the shed instead of helping it run down OFF of the shed.

Back to the window…

The nice thing is that we’ll be able to open these for some air flow. We didn’t open the other ones because they also had the old storm windows and we didn’t want to mess with them. Even though we have central air both Jay and I prefer to have the windows open to get fresh air in the house. In fact, when Jay got home on Wednesday he mentioned how nice the house smelled because the fresh air had been blowing through all day. It’s not good for my allergies, but then again neither are the cats and we know that I ignore that one, too.

So, these are a bit boring now without the grid, but I don’t care. As long as I don’t have to see the peeling paint on the aluminum and the dirtiness on the inside.

There you have it. Our new windows that were a bit pricey, but I was completely happy with how they were installed. The fact that I don’t have to touch up anything on the inside because EVERYTHING was done on the outside was a big plus. Also, these windows have a lifetime guarantee for any defects or problems. If we start getting condensation in them all I have to do is call up the company and tell them to get their butts over here to fix it and they will cover all expenses for fixing it. You can’t do any better than that!