In a previous post I admitted that I hadn’t updated my blog because Jay and I had been working on projects that were going to be Christmas gifts. Now that they’ve been given I can show off what was given to our mothers.

We had received a catalog in the mail where you can get a bazillion different things personalized. As I was looking through it I asked Jay if he could make something similar to the item that I spied on a page for home decor. It was a wooden picture frame with a saying that was lit from behind with a bulb. Instead of a saying, though, I told Jay I thought it would be better with an actual picture.

He assembled the frames, I chose the pictures and printed them on velum, then he assembled them all together. This is what we came up with:

The picture isn’t the best because I had to get it wrapped and the lighting was all wrong, but you get the idea. This is a picture of Jay and his brother, Justin, on our wedding day. I think it’s one of the few pictures that have been taken of these two together as adults.

And when you plug it in… 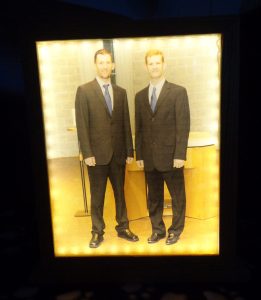 So then I found a picture for my mom: 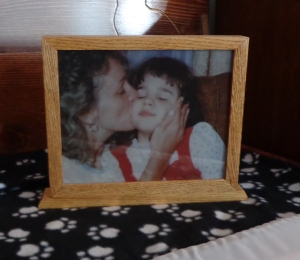 This is my mom and Chrissy. The picture is stamped with August 1985, so Chrissy was six when this was taken.

Sorry, this was the only angle that I could get a picture of this one lit up.

Not only did we give handmade gifts, but we also received a couple.

First, our friend Dave made this for us:

Isn’t it gorgeous? He did a really good job on it! I have decided that this is going to go on the wall beside my cross stitched Cross above the dresser in the living room.

Then my mom made these for me: