Insanity, Thy Name is Kerry! 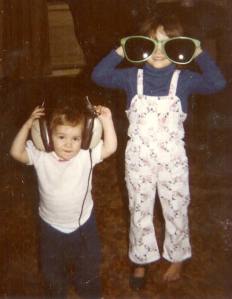 While talking to somebody at work the other day I realized that Thanksgiving is less than a month away… which means that Advent is only a month away! I know that we’ll have the wreath stand ready by then, but time just seems like it’s zipping by without giving me a chance to pause! 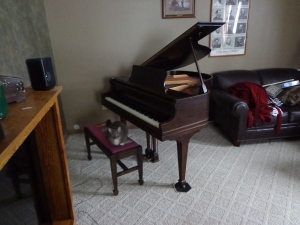 This past Sunday was Confirmation at my church. I knew that Jay wouldn’t want to attend that mass so we went to the earlier one that starts at 8:30 (our usual mass). I was at church from 8 a.m. until 12:45. Then I ran to the grocery store (my least favorite place!) and then headed home. I planned to make meat loaf and cheesy potatoes for dinner. Jay had to go into work Sunday night so I was trying to time everything out in my head. I started to clean up the kitchen while the potatoes were nuking in the microwave. I nuke them to cook them and then let them sit for a few hours to harden a little bit. Then I pour the cheese sauce over them before tossing them into the oven to bake. After the first round of nuking some of the potatoes were done, but others still needed more time. I placed more time on the clock and hit ‘Start’

THAT is what happened to the microwave! I looked to see if the LED lights were still on as they are plugged into an outlet that shares the same circuit breaker with the microwave. They were still happily glowing purple. Okay…. I went downstairs to see if by chance something was wonky on the breaker panel, but it looked okay to me. Jay was standing at his work bench so I told him, “I think that the microwave just kicked the bucket.” He double checked the breaker panel and then we performed a few more tests on the outlet that the microwave is plugged into, and then plugging the microwave into a different outlet via extension cord. Nope. Still dead. *sigh*

I was told to go ahead and get another one. Where? Our microwave is above our stove and I know that you can’t just be-bop into any store and get one. I hopped onto the computer and did some searching. First off, hardly anybody stocks the stupid things. They have all kinds for sale, but when you hit the button to see only the ones available in the store, most of the inventory goes away. It also doesn’t help when one is boycotting GE stuff since they seem to make most of the appliances out there. No, I will NOT allow anything made by GE or Martha Stewart into my house. To the point where it costs me extra money, as evidenced by my microwave purchase.

This is my new microwave. It’s an LG (the same brand as my washer and dryer… and one of my old cell phones). I love the washer and dryer so I’m hoping that the microwave will follow suit. I went with this one because it was in stock. And it had good reviews as compared to the Magic Chef that was also in stock for $100 less. I didn’t want a stainless steel finish, but beggars can’t be choosers. I do love the fact that it has green numbers so that I can more easily see the time from across the room. The old one (and my stove) have blue numbers that I just can’t see with my horrid eyesight.

It took me longer to go pick the stupid thing up from Home Rip-Off than it did for us to install it. Why? Because Jay is blessed with incredible luck (after all… he married me!). Now, if it had been just for me I would have had to tear out the cabinet, rewire the outlet, and possibly re-route the wires just to get the new one to fit. Not Jay. Do you know that this new microwave perfectly fits on the bracket that was already in place for the dead microwave and the holes were all exactly where they needed to be?? It took us longer to measure and double-check the hole spacing than it did to lift it up and get it put into place. It so perfectly fits the spot that it disgusts me. I still roll my eyes and shake my head when I walk by the dumb thing. But that’s how things go for Jay!

Speaking of my kitchen, to add more to my pile of insanity, I’m thinking about taking one of the cabinet doors off and stripping the paint to see what the wood looks like underneath. Apparently I’m not busy enough nor do I have enough projects going. The cabinets are made of real wood, not that stupid flakeboard/MDF junk, so I would love to see what they look like underneath the numerous layers of paint. I know that there are numerous layers because a lot of the grooves in the front are almost smooth due to being filled in with paint. I would prefer natural wood cabinets anyway and this would save me a lot of money. Obviously not time… since it will probably take me all winter just to refinish the doors and drawers. Then I’ll have to wait until summer to strip the cabinets themselves with all of the doors and drawers removed. Yikes! What am I thinking about getting myself into!? Every morning I look at them as I’m making coffee and I think about starting on that project. I need to hold myself back until after Christmas. I’m not going to have any time to do it before then! 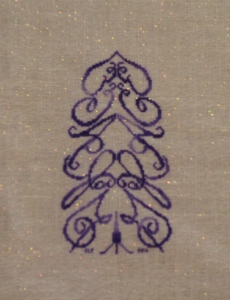 I’ve been stitching like crazy (at least when I have time to stitch like crazy) on the ornaments that I wanted to have done before Christmas. Yeah… I don’t think that’s going to happen! I have Grace and Love stitched, but no beads or finishing done to them yet. I’m almost done with Peace, but that one would have to be finished, too. I am dying to get started on the next Cross that I want to stitch for my wall, the Autumn Cross, but again I have decided to wait until after Christmas to start that. I have enough going that I don’t need to toss that on the pile right now. 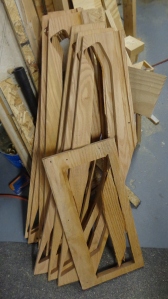 Plus Jay and I have been trying to figure out what we can make with the scrap wood from the pews that we have left over from the Advent Wreath. We’ll use a good portion of it for little tchotchkes that are handed out to parishioners at the Ash Wednesday mass. These tchotchkes are used as a reminder during Lent for whatever the theme is that we’re supposed to be concentrating on. In previous years we’ve received wooden hearts, pieces of lake glass and little wooden ice cream paddles. Jay and I have offered our suggestions and services for this year, but they don’t have a theme yet. We’ve let the people involved know that we will do this… we just need to know what we are supposed to make. We have a great Small Faith Group that we belong to and they have volunteered to help us when the time comes. I think that we’ll need to make 150-200 pieces of whatever is decided upon. Yeah… that will definitely require a few extra sets of hands! 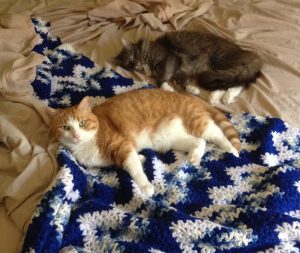 Luckily Bob and Chester are resting and relaxing for me. They are taking extra naps to help cope with the insanity. Aren’t they so good to me? Now if I could only get them to fill in for me at work so that I could stay home and get some things done!

This entry was posted in My House and tagged Cats, My House, Wood Working. Bookmark the permalink.