My sewing room looks huge, but it’s really not. I have slanted ceilings on both sides with one wall being slightly taller than the other one.

This makes organization a little difficult.

And it also means that all of my tables end up on the taller wall.

About a month ago I received an excited call from my mom. She had found a black 301A sewing machine and she was so happy. It was the last sewing machine on her wish list. She already has the all tan 301A, and I bought my two-toned 301A last fall. The tan and black ones are both long beds while mine is a short bed.

The black machine came with a cabinet, but the long beds weren’t meant to be inserted into cabinets. My mom gave me the cabinet so that I could install my short bed machine in it. Which means that I had to make room for it…

I had to move things around on my table that Jay made for me to make sure that when I open the 301A cabinet the lid will clear everything.

Chester was supervising to make sure that I was doing everything correctly. She approved of the cabinet and I had a hard time shooing her off so that I could actually put the machine in it. 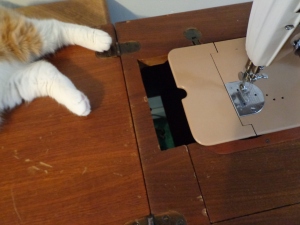 When somebody had decided to put the black machine in here they had to cut away a portion of the cabinet to get it to fit. According to my mom, though, it didn’t fit well at all. Again, these cabinets were meant to house the short bed machines, not the long beds.

Now that the 301A is in the cabinet I have placed the Merritt back on my regular sewing table. Technically there are four machines in this picture. My 99K is in its carrier underneath the table where the serger sits. I moved things around a little more and the serger now resides in its carrier beneath the 301A. When I need it I can always take it out and quickly plug it in. I left the power cord stashed on the table so I don’t have to crawl underneath to fish the cord up behind the table every time I want to use the serger.

I have asked Jay to fix the gap between the cabinet and 301A so that it doesn’t cause an issue when I’m trying to sew. I guess that now I need to figure out more things to sew. I feel kind of guilty having four machines easily at my disposal yet are idle most of the time. If only I didn’t have that pesky full time job that gets in the way of having fun!