I’ve been a little absent from my blog. Things have been super busy around here and I haven’t had a lot of time to blog. Also, I’ve been working on Jay’s birthday present, but I can’t tell you what it is right now because he reads my blog.

So, what have I been up to?

There was a Home Show that took place locally. My friend Patty and I attended and I took pictures of these decorated rain barrels. There were some really neat ones, but I loved the cat one the best.

Then there was a whirlwind trip down to my sister’s in North Carolina. She just bought a new house and was feeling a bit overwhelmed. My mom and I went down to help her do some painting.

This is her living room. Can we say 70’s?? The orange shag carpeting is the best. With all of the paneling it was too dark, though.

This isn’t the best picture, but you can at least get the idea. We painted an accent wall a light creamy beige to help lighten the room. This was taken at night, but you get the idea.

I think that it turned out pretty good.

A week later I was heading out to Toledo for the Weak Signals RC show. Jay and I went with our friends Dave and Patty. It was a good time, but we were disappointed in the number of empty booths. Apparently the booth fees are getting too high so people are opting to skip the show.

The next day my mom and I traveled a few hours away to attend a Sewing Expo. I had never been there, but since it was so close I really wanted to go. There was a LOT of quilting stuff there, followed by machine embroidery. Bringing up the rear was general sewing and then garment sewing.

My mom really enjoyed it because quilting is her big hobby. She also crochets, knits, sews, and fixes old treadle sewing machines.

I did manage to find some blue lace for $.50 a yard (I bought 20 yards… all that they had), some nicely-priced thread and a LED bulb for my 301A sewing machine. 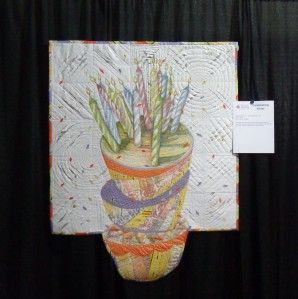 There were some interesting quilts on display, though.

Because I’m not very involved in quilting I had never seen one where the main design actually falls off of the quilt. Also, I like the shadows of the candles on top. Nice touch!

There were lots of women around so I couldn’t get directly in front of all of these quilts to take better pictures. You’ll just have to deal with what I was able to snap.

This one intrigued me because I had never seen this style before. I love this one.

Being a farm girl I had to take a picture of this one. It’s full of applique pieces, which I know my mom absolutely hates. Just like I’m a lazy baker, my mom is a lazy quilter. She doesn’t like all of the fussiness that is required with applique. I can’t say that I blame her. I would probably skip it, too.

This isn’t the best picture, but I had to include it. I LOVED these cats. Aren’t they adorable??!

1 Response to Lots of Traveling!