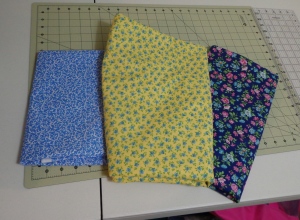 I keep posting teasers about the fabric I’ve been purchasing, but I haven’t really done anything with it. Now that I have my 301A up and running I’m hoping to put it to a LOT of use!

This poor dress has been hanging around since the end of January. I had finished it, but never took a picture of it. Also, I hate to turn the dresses in as singles. It always looks much better if I can hand in a group.

This was a batch of dresses that had been sewn together, but not trimmed. I shouldn’t have taken so long in trimming these out, but I just got busy.

Also, by the time that I got to these dresses I was done with orange and yellow. I would be happy if I never have to trim out an orange dress again.

This was the 11th in this series of dresses. This particular one is also the first one that I used my 301A to stitch the trims. This one isn’t very fancy, but it’s cute.

Here is the 12th, and LAST, of this series of dresses. No orange!! Woo-hoo!

I had a little more fun with this one. As you can see I wanted to pull out the blue in the fabric so I used a bright blue for the arm edges and the ties. 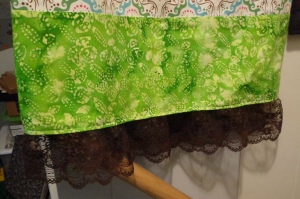 There was some brown in the main body of the dress and I had this wide brown lace that I thought would look darling at the bottom of the hem. 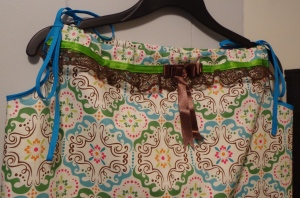 I used a narrower brown lace at the top, but this time I wrapped the top of the lace with a lime green satiny ribbon. Then I made a bow (of sorts) and sewed it on top of the lace. Here’s a good tip… if you accidentally sew a piece of the lace where it’s not supposed to be sewn you can use a bow to cover it up. You can’t tell at all that my lace has a bit of a hiccup in this spot.

Not a whole ton of sewing, but at least a little bit was done. I have some non-dress sewing to show you, too.

Since my 301A didn’t come with a cover I had to make one. I dug through my stash and found this material that I can’t use for dresses because it’s got too much polyester in it. Also, it turns out that this was a valence. So I folded it in half, made some reference points with pins and serged it up. It’s not the prettiest, but it’s functional… just like me.

I also want to point out how you never can tell what bargains you might find at a goodwill or thrift store. In the middle is a cut of fleece that I found at my local Goodwill. I estimate that there’s about a yard of material right there, and fleece goes for around $6.99/yd at full price. This was marked at $1.49, but it had a yellow tag so on that day it was 75% off the price… which made it around $.47! For less than $.50 I managed to get a nice piece of fleece that I can make into a blanket for the Dresses for Missions shipments. On the right is a homemade skirt that I found. It’s a very long homemade skirt that will never in a million years fit me. However, I ended up getting it for around $1.89 (it was one of the tags that was marked down that day) and there has to be around 2 yards of a heavier cotton/poly blend fabric. I’m not sure what I will make out of it, but I can always use black fabric. Finally, on the left is a nylon windbreaker. I am slowly beginning to gather the materials to make myself a new lunch bag. I was going to purchase a waterproof oxford material for the outside of the lunch bag, but then I decided that was ridiculous. I would pay close to $12/yd for that material. All I need is something fairly waterproof and easy to clean. I decided that I could find a really nice quality nylon windbreaker and so that’s what I did. This cost me around $1.89, too. I walked out of there with everything totaling $4.40. Not too shabby!