Chad, the Spad, was feeling pretty weighted down. He wanted to get some things off his chest. Or else he wanted to lift some weights. He wasn’t sure what to do. Instead, he decided to show off his flaps.

Those are some gorgeous flaps! They are going to look so good on him!

I was right! They look like they were made especially for him! And those ailerons are so sleek. Wow. That is one good-looking wing!

Chad is a bit nervous, though. He’s been trying to bulk up a bit, but not gain too much weight. It’s such a hard balance between good-looking bulk and flab. Let’s see how he’s doing…

Ooooo…. almost six pounds. That’s just the wing, though. Chad will have to be careful if he doesn’t want to make his new wing flaps and ailerons be stretched to their limits.

His athleticism is quite amazing. Look at that balance! Before we take a look at the scale I want to make sure everybody notices that Chad took his cowl off. *sigh* Chad, the cowl doesn’t add that much more weight to you. It’s like me taking my sandals off before stepping on the scale.

Barely 4.5 pounds! Goodness. I’m going to start singing “You’re So Vain” before his next weigh-in.

Considering the size of his frame I would say that his BMI is very good.

Keep up the good work!

There’s nothing that a little cosmetic surgery can’t fix. When Chad has the tape removed he will have a beautiful piece for his leading edge.

Okay, so here we are doing something with the something, but it’s done differently than what it was supposed to be done.

I know! This is where Jay had to fill in the two body cavities so that he can install hardware that will hold the wing to the fuselage. And he thinks that I don’t always listen to him…

And then we have… this… ummm… underbelly… and wood something.

Now that we’ve installed the wood filler we can cover up the frame work and make it look pretty.

While that is drying we can also add the mount support for the wing pokey-thing that helps to hold the wing in place.

Once everything is dry and set, don’t forget to drill the holes where you can screw the hardware in to hold the wing onto the fuselage. Doing this required the wing, a brass tube, and a drill. It was quite the production! 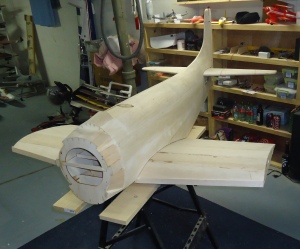 Is it just me or does Chad look like a squattier version of one of those bush planes that they use a lot up in Alaska that can land on the water?

Oh, wait! I’m supposed to be showing you how beautifully Chad sits on the wing saddle.

Beautiful job. The long, smooth curves bring out the broadness of his shoulders and make it all come together so wonderfully.

I call this picture, “Brother, can you spare a servo arm?”

It’s getting rave reviews at the art gallery.

It says so much about society and material possessions. 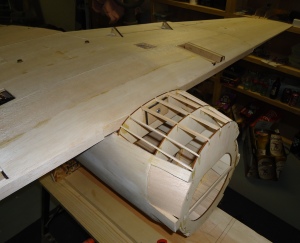 Look! I told you that the wing pokey-out thing would fit into the support mount perfectly.

Who’s got a cute belly??

Chad has a cute belly!

My cats like to get their bellies scratched, too.

Two months. That’s all it has taken to get to this point. At this rate it will be ready for primer before the first of the year!