The masses have spoken. There will be more pictures. At least, as many as I can get Jay to take. This series of blog posts has become rather popular so I will defer to those who have asked for more pictures. I will do my best. Also, if you have any questions at all please don’t hesitate to ask. I know very little about this project; I’m just here to entertain you while showing off the build pictures. Jay, my husband, will be more than happy to answer any questions that you might have. Just leave a comment and we will get back to you as soon as we can. Thanks! 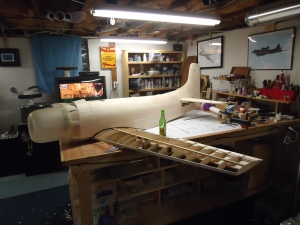 In our last post the poor Spad was depressed. It sprawled on the bench sobbing and trying to drink away its sorrows. Poor Spad! What’s wrong?

“My arms are cold! I need some covering. Also, I can’t reach my beer from this angle…” 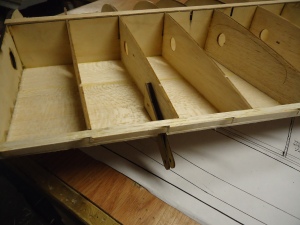 We still have some work to do before we can cover the wings, so let’s get to it!

First we must install the hinges for the flaps. 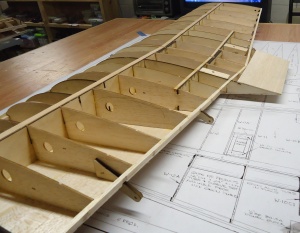 Those are some pretty flap hinges! Chad is going to love them! (Did I mention that I’ve named this airplane Chad the Spad?)

We also have to make the aileron hinges. I know that Jay worked on these for quite a while. He decided that he didn’t want to hinge the ailerons like the plans called for him to, so he drew up his own design and cut it out on his CNC router. It has something to do with the angle of the wing and how his design makes the aileron look more scale or something. You’ll see more later.

Here is the bottom of the outside part of the wing. The servo has been installed and the aileron hinges are looking quite dapper!

Once the other side of the hinges are installed on the aileron we can also put the sheeting on them. By the way, each of these little weight blocks weighs 1 pound. Keep that in mind for another picture coming up.

Also, you can see the mock-up of the motor that Jay 3D printed so that he can accurately fix things for when he actually is allowed to buy the motor. He’s been asked to please wait until after Christmas before purchasing the beautiful purple Hacker that will be getting installed in Chad. 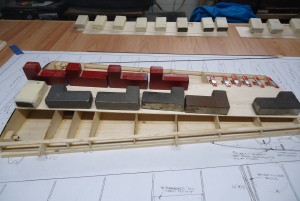 Chad, you don’t have to cry! We have begun to sheet your arms!

The L-shaped blocks weigh 1.5 pounds each.

I don’t think that this sheeting is going anywhere… 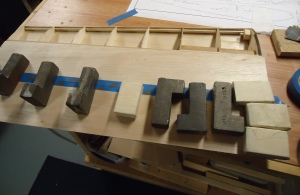 And another look at the aileron hinges… 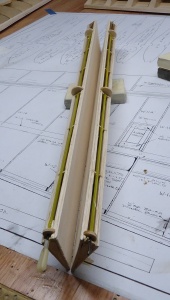 Oooo… the ailerons are all covered and have their pins inserted.

Yikes! We’re having quite the gathering of weight on the middle section of this wing. I think that we should take a break and let this dry.

In the next installment we will be checking in on Chad and talking to him about his feelings regarding fiberglass coverings and what he feels is in vogue this season.