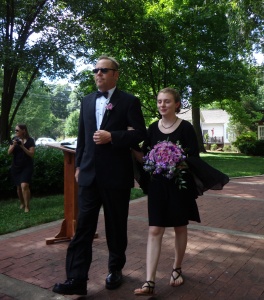 Christmas is coming up and so I asked my sister what I could get her stepdaughter. It seems that this girl loves to draw so I was told anything dealing with drawing would be very much loved.

This was new territory for me. I have never been a good artist at all. In high school I had to draw a picture using pastels, so I chose a Tiger Lily thinking that it would be fairly simple. It was the prettiest orange banana peel that you have ever seen! Needless to say, I’ve never ventured down the drawing aisles at Hobby Lobby.

While perusing the goods I stumbled across a hard bound sketch book that was decently priced. I also bought a few pencils, drawing pens, and other little things to go along with it. But I couldn’t leave it at that. I wanted to do something else. I wanted to make a little bag, of sorts, to go along with it so that it would be easy to grab and go. She can keep all of her drawing things together and carry it between her mom’s and dad’s places with very little trouble. 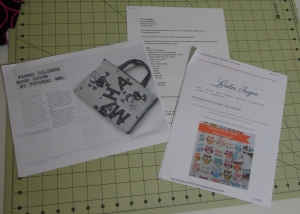 I searched all over the internet, but nobody really had what I was seeing in my mind. I knew that I wouldn’t be happy unless I could make something that I thought would be perfect. I was seeing a carrying case that snugly fit the sketchbook, with a flap that opens on the outside and holds all of her colored pencils, pencils, and pens with little elastic loops. 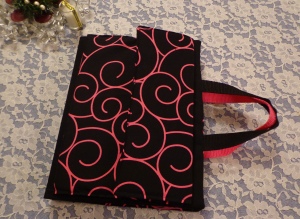 Something like this, in her favorite colors of black and hot pink.

That opens to reveal her pencils all neatly organized.

This was not an easy project for me to create, so let me take you through the steps in case you are interested in trying to make something similar.

I am not good at just making things up like this out of thin air. Especially when it comes to sewing. I’m still fairly brand new at this hobby so I don’t have a good feel for how I need to piece things together to get the outcome I want. It was a slow and thought-out process.

I started by measuring the book’s cover and spine to get an idea of how big the shell would have to be. I then added 1/4″ all the way around for the seam allowance. Here you can see my chicken scratch as I drew out what I wanted to do.

I did the same thing for the front pocket. I knew how big my cover was, so I deducted some width and length for the pocket. I knew that I wanted two areas for the pencils plus the flap. Then I roughly calculated where I would have to sew the elastic to make it look even. I told you this was quite the process! I wanted to make sure that I had my game plan all set before I even started to sew a single stitch. 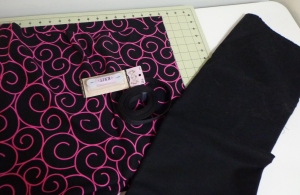 For my materials I used a cut of the pink swirly cloth, some black duck cloth that I had on hand (I figured it would hold up to a little more abuse), and then elastic and the handle material. I also ended up using some plastic canvas, but I’ll get into that a little later.

I cut all of my pieces first. I used the pink swirls as an accent color on the inside. I also created essentially two pockets on each side. I had a couple different ideas swirling around as to what exactly I would do, but I ended up sliding the back cover into the top pocket (between the pink swirls and black cloth), then I slid the front cover between the second pocket (between the two pieces of black cloth). I placed the light pink material in between so that you can see they will end up being pockets once they are sewn.

I then cut two pieces of the pink swirls for the front pocket. I made this all one piece because I wanted to avoid having to deal with hiding seams and making it look good once the pocket was sewn onto the front cover. Because I was going to sew the front pocket on, but couldn’t do it after the inside was all sewn together, I had to go to work on the front pocket first.

Using the pattern I had drawn up at the beginning, I made some chalk lines on the material so that I would know exactly where the two lines of elastic would go and where the pocket would actually get sewn onto the front cover.

Then came the boring part… sewing on the elastic. This was actually the hardest thing for me to do. I was winging it because I couldn’t find any really good instructions to tell me how to do this. Believe me, I looked! So I did what made sense to me. I grabbed a colored pencil and used it to figure out how big to make each loop. I decided to sew both pieces of elastic at the same time so that I wouldn’t have to worry about going back to align the second piece of elastic. So I did this for every loop… pulling the elastic over and determining where it should be sewn.

Then I wanted some flat spaces between each pencil so that when the pocket is folded the two groups of pencils should (hopefully) nestle in beside one another. 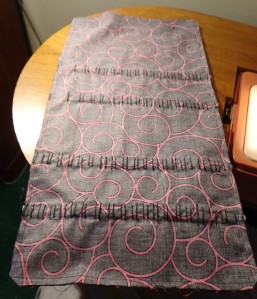 It took me over two hours for each section, but when I was done, it was somewhat lined up. Next you want to determine where the Velcro needs to go to hold it closed. Position those and sew them on. Then I put the other piece of material for the pocket on and sewed it together. Don’t forget to cut the corners before you turn it right side out. You might want to take an iron to it at this point to smooth out those edge seams. 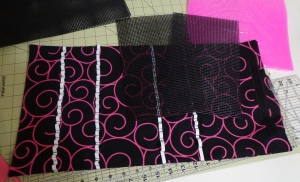 Before going around the edges with a top stitch I decided that I wanted to stiffen the pocket up a little bit, but also make sure that if anything got spilled on it the cover could easily be washed. So I used plastic canvas. I cut it to size, in three different sections, inserted them into the pocket, and sewed it up.

Chester was helping me to determine if the pencils were hugging between each other like I had hoped. They were!

Place the pocket on the piece of material that is being used for the outside of the bag. I actually wrapped it around the book, too, so that I could get a better idea of where the pocket should be placed. Then pin it together. Based on the chalk lines that were put on the material earlier, sew the pocket onto the front cover.

Before pinning the inner pieces in place for sewing make sure that you sew the edges over on all of the inside pieces. You want these to look nice.

I also made a flap and sewed it, along with its matching piece of Velcro, to the inside pink swirly pieces.

On the outside shell piece I found the middle and then put two pins on either side where I felt the bag handles should be sewn. 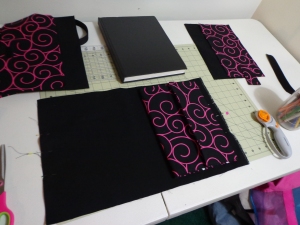 Now it’s time to sew it all together. It’s going to be a little bulky due to the pocket already being sewn onto the front, but just take your time and it will be okay.

I actually pinned each layer separately. It was easier for me to line it all up one piece at a time. That made for a lot of pins, but it worked out really well for me.

I also pinned both sides on so that once I sat down at my sewing machine I could sew both on without having to get up again.

Once they were sewn together I trimmed the seams a little bit, cut the corners and flipped it right side out. So far, so good! Then I ironed the edges a bit (be careful about the side where the pocket is as there is plastic canvas in it). To give it a more finished look I also top stitched the edges, too. 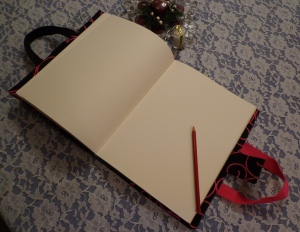 I think that it turned out okay. I hope that she likes it. My sister thinks that she will. 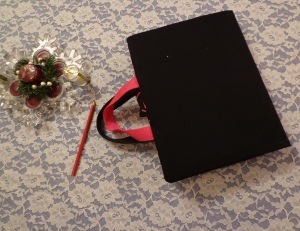