I’m sorry. I just couldn’t help myself. In a previous post I mentioned that I had found an ad on Craigslist for a treadle sewing machine, but it was referred to as a ‘back and forth pedal’ machine in the subject line. It still makes me giggle..

Then yesterday I gave you a quick tour of my mom’s sewing room. Yes, these two things are related…

My mom doesn’t think that she’s very smart, but she is. She’s not book smart, but you give her a sewing machine and it’s amazing what she can do with it. In the last few years not only has she started to collect some vintage machines, but she has also taught herself how to fix them up. She has taken many machines that most people might just toss and has put them back into working order. I remember one machine was so badly seized up (due to lack of proper maintenance and care) that she soaked it in kerosene for a period of time. Once she cleaned it up she managed to get it running like a charm. 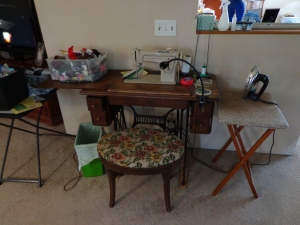 Currently she has a treadle set up in her living room and she will sit and sew with it. In fact, I think that this machine might be her current favorite.

Yes, she actually uses this to make quilts. 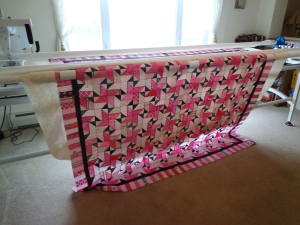 I believe that she made this quilt on her treadle (and has it currently set up for quilting with her long arm machine).

The quilt that she currently has on her bed was sewn on her treadle machine.

Those squares are TINY, too! 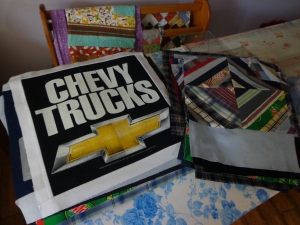 And she has been commissioned to make five quilts for one of her coworkers. The coworker’s husband passed away in the spring so she asked my mom to take his shirts and make lap quilts for her kids. Well, filler squares are needed, and you can see to the right of the Chevy Truck square is a pieced square. This was sewn on the treadle, too.

Here’s a better picture of it. I’m not sure what makes this one so great, but she loves it.

Here is another treadle machine that she has. It sits in the living room, too. In fact, I think that this is the one that she has tried to give me a few times. I would love to have it, but I’m not sure where I would put it. Yes, the machine in this cabinet runs like a charm, too.

These aren’t treadle sewing machines, but it’s another example of vintage machines that she has sitting around. I wonder if my 301A would fit in one of these cabinets…

And then we can’t forget the shelf of machines that she has tucked away in her upstairs hallway. I count at least seven machine boxes on this shelf. Now, to be fair to her, I’m not sure if all of these cases are occupied. There’s a chance that they could belong to one of the other machines currently being used.

There was a time, though, that every time I stopped by her pile of old machines in the dining room was growing. I finally said, “Babe, I think that these things are breeding like rabbits!” The pile has been moved, but apparently a good portion of it is now residing here.

Oh, and here’s an interesting story for you. She has managed to sell a couple of the machines that she has fixed up. One of the people that she sold it to was an Amish woman who lives near her. My mom had to go over to the lady’s house and show her how to use the machine! I know that there are some women in the Amish community who use treadle machines as they aren’t electric so it’s allowed. This woman whom my mom was teaching had her six (or however many) kids standing around and listening to my mom so that later they could help her remember what to do. Hopefully that strategy worked!