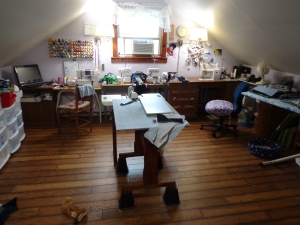 Over the past two weeks you have read a lot about my mom and her influence on me in regards to sewing. I thought that I would give you a little tour of her sewing area. To be fair, I would have to give you a tour of my parents’ entire house as I think almost every room has at least a little piece of my mom’s sewing stuff in it. This is, however, what you would technically call her sewing room.

It didn’t always look like this. In fact, when my parents first bought the house this is how this room looked. It required a LOT of work. This room was my younger sister’s bedroom until she moved out. Then my mom took it over as her bedroom until I moved out. Once I was out of the house the transformation began.

They just recently laid the new floor and moved things around a little bit.

She has a corner for ironing.

Her cutting stations are in the middle.

In between her ironing board and her main sewing machine she has her various acrylic rulers organized. They are within easy reach of her cutting table in the center. 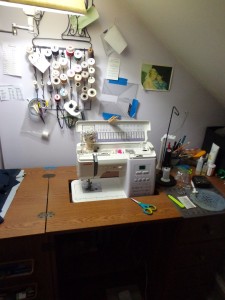 Moving around towards the back wall is her main sewing machine. I think that this is only the third sewing machine that I remember her having. Growing up she had an old Kenmore that she bought when she was first married. Then when that kicked over she bought a second, newer, Kenmore. If I remember correctly she had trouble with the bobbin or tension or something. She took it in to get fixed, but whatever was wrong with it she just decided to get a new machine instead.

To the left of her regular machine are her two sergers.

She just had one of these in for service last year and that was NOT cheap. The good thing is that she definitely gets her money’s worth out of them.

Then she has her embroidery machine. This also gets a LOT of use. 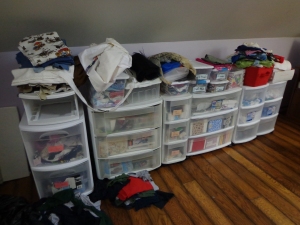 As we keep going to the left we run into a wall of drawers that hold various items like binding, bias tape, certain size triangles and squares, ribbon and lace, and whatever else that might need to be stashed.

Even the door is used for storage! This is where she keeps her extra cones of thread. Not only does she use these for her sergers, but often she’ll buy cones of white and black because it’s more cost effective for her to sew on her regular machine using the cones. You get a lot more thread for the money this way. 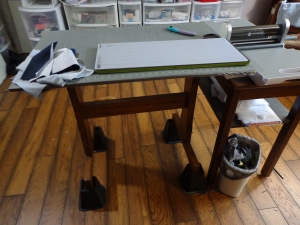 One other thing that I wanted to point out is that you should keep various furniture in mind for other purposes. A lot of people refer to this as ‘upcycling’ and it appears to be a trend. My family calls it, “we already have this and can’t really afford to go out and buy something else, so I’ll modify it to fit my needs.” The base of this was actually our old kitchen table. The top started to warp and I think that the legs were broken or something. My mom removed the top, fixed the legs, and attached a piece of plywood cut to a size that would fit her large cutting mat. She’s quite handy. Then in order to make it taller (and minimize bending over) she bought some of those bed risers that you often see in the stores to help increase under-the-bed storage. Is she resourceful or what?

I mentioned that she just recently rearranged her sewing room. That’s because she used to have a long-arm quilting machine and frame in here. Boy, did that take up some room! She was frustrated, though, because she could only quilt queen size quilts on it. A lot of people prefer King size and she makes quite a few king size quilts so it was a pain. So she went out and bought a new long-arm. But where is it?

It now resides in her dining room.

If we want to gather for meals we all have to pull up stools to the quilting frame.

It takes a little practice, but she is getting pretty good at it.

The dining room table and china cabinet got moved into the end of the living room right next to the dining room. After Chrissy passed away that end of the living room really wasn’t used for much. It is a long and narrow living room so we mostly clustered at the other end where the couch, recliners and TV live. It makes my mom happy to have equipment that she can actually use and doesn’t have to make adjustments for its shortcomings. Both of my parents have worked hard their entire lives so I’m glad to see when they do something that makes them happy.

In another post I will introduce you to some more of my mom’s machines (yes, she has MORE… I think that they breed like rabbits in her house) and show you what else she is up to lately.