It has been a while since I’ve posted anything on my blog regarding airplanes. The biggest reason for this is because Jay has been too busy playing with his 3D printer, CNC Router, and his new laser head for the router. There are way too many toys and not enough time!

Recently, however, one of our friends from church has been itching to get into the RC Airplane habit/obsession. For the past year or so I’ve given him all of the copies of Jay’s magazines once they have piled up to a point where I need to get them out of the house. Apparently Dave, our friend, takes them home and just pours over them. Well, he decided that he wanted to go out to the Weak Signals RC show in Toledo this year. 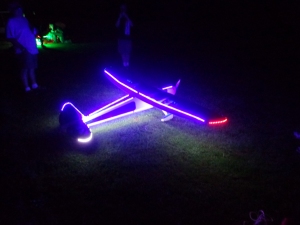 The Weak Signals show is where Jay picked up his SIG Rascal 110. We hadn’t been out there since then so we told them that they could head out with us.

It was an enjoyable day. I didn’t take any pictures at the actual show so you’ll have to take my word for it that we went. Jay didn’t have anything in mind that he wanted to buy so he just made a list of a few little things to pick up for the better prices that you get at the show (batteries, motors, etc). 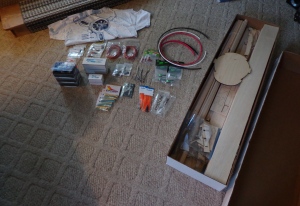 This was his haul…

It doesn’t look like much, but the balsa kit is going to end up being quite large. That will take up its own post at a later date. 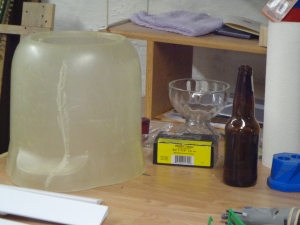 To give you an idea of how big this airplane is going to be, here’s a picture of the cowl for it —>

I left the beer bottle in the picture for size reference. We are thinking that Jay might have to purchase a trailer in order to transport this one. 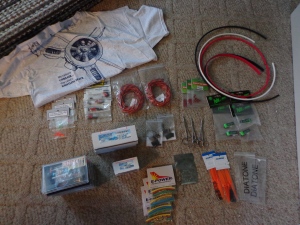 As you can see the rest of his haul is fairly boring. Batteries, shrink tube, quad propellors, aileron extension wire, deans connectors, etc.

“We called it Corsair. They called it Whistling Death.”

Now that Jay has this kit waiting in the wings he has decided to get back to his other jets that he had started, but not finished. Technically, he didn’t decide to get back to them. I essentially pointed out that he shouldn’t start another new airplane until the other two are finished. The Yellow A-4 is back on his workbench and I will post some updates on that later this week. After that he has to finish up his Panther that he was scratch building. It will be Fall before he can start on the new one.