If you haven’t already noticed, I’m not your typical run-of-the-mill kind of girl. Why be “normal” when I can be me? As Jay and I were planning the wedding he would come up with ideas and I would attempt to incorporate them as best as I could. After all, this wedding wasn’t just for me. I wanted it to represent him, too. Thus, our cake topper was born.

His original idea was to have two jets on top representing us. I don’t think of myself as a jet, though. A P3, yes… a giant plane that slowly lumbers around, observing, and showing her muscles when necessary, but for the most part not really instilling fear into the hearts of those who see her. Even as a P3, though, I didn’t feel that it would completely represent me. I decided that I needed something Civil War-ish on top. Since I didn’t have a whole lot of time to make something from scratch I remembered that my sister had given me a Scarlet O’Hara ornament a few years ago for Christmas. Perfect! You should have seen the looks on the faces of the people who were told what we were doing for the cake topper. However, Jay and I were so very pleased with the results that I wanted to do a little tutorial on how you can make your own cake topper. 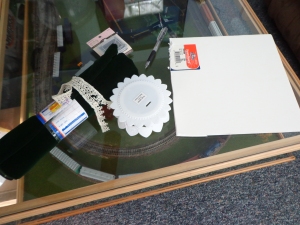 Here is a bad picture of the materials that I used for this project. Including the kit that we purchased for the A-10 (1:100 scale), our cake topper cost less than $20. Next time you’re in a store take a look at the cake toppers and see just what you can get for $20. I can guarantee you that none of them will be nearly as awesome as mine. 😉

You will need to purchase the plastic base ($1.57) so that you have a platform on which to build your topper. This will also keep your adornments out of the frosting of the cake and is easy to clean up. I then used some foam board, a remnant of green velvet that I bought at Hobby Lobby, some pretty antique-looking lace, and some straight pins. Also, you will need glue. More on that later. 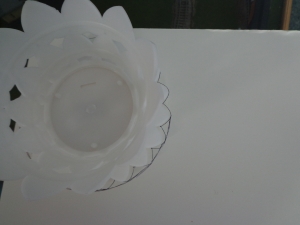 I wanted the platform that Scarlet was going to stand on to be about the same size as the top of my base. Flip the base upside down on your foam board and trace around it. I actually traced around the petals on the top, and then drew lines from point-to-point in order to make it circular.

To cut out the circle it’s easiest to use an exacto knife or a sharp razor blade. Luckily my sweetie has the best work bench and I was able to use his scalpel (aka exacto knife) to cut out my circle.

I found a beautiful piece of dark green velvet and used this as my base fabric. Cut a circle out of your material that is big enough to overlap the bottom of the circle.

Since we are covering a circle you have to attack it with a plan in place as to how you’re going to glue it down so that you won’t get wrinkles. Because I was at Jay’s when I was making this the only glue that I found at hand (without digging into his stuff) was some thin CA that he uses for his models. It’s very similar to super glue, so I wouldn’t recommend that you use it if you have other options. Hot glue would work or even just plain white crafter’s glue.

I started out by gluing down four sides, almost in a square. Leave the fabric in the corners alone because you are going to want this free so that you can overlap and pull it tight in a little bit. 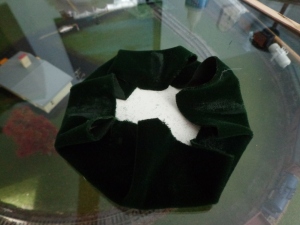 Once you have glued down the four sides, go back, pull the corners in towards the middle and glue those down. Make sure that you are pulling it tight so that you can pull the wrinkles out. You will still have a bit of overlapping fabric that is sticking out.

Next we want to take care of the excess fabric. After all, we want this to lay flat on our plastic base. Using a pair of scissors, cut some of the extra fabric off while leaving enough to pull tight and glue down. In this picture you can see that I cut one side close to the part that was already glued. I then just glued the pieces that are sticking up, down onto the already glued fabric.

Check to make sure that it fits as you want it. Don’t worry too much if there are a few wrinkles or spaces because we’ll cover this up later. 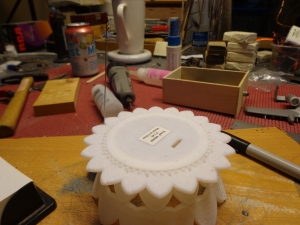 Since we had a jet going on top Jay wanted it to look like it was in flight. The model that we had purchased happened to have a slit in the perfect spot under the fuselage, so we found a thin wire that would fit and attached it to the base.

To finish the cake topper, hot glue the fabric-covered base to the plastic platform. Then wrap the lace around the edge of the base to figure out how big of a piece you need. Due to the fact that I was using velvet I didn’t want to glue the lace on because I was afraid that you would be able to see the glue spots when looking at it. This is why I used the foam board. You use the straight pins to pin the lace to the platform. They go in easily due to the fact that it’s just foam you’re sticking them into and it holds very well. Once the lace is on, attach your jet to the wire and set Scarlet on top. There you have it! Your own cake topper! 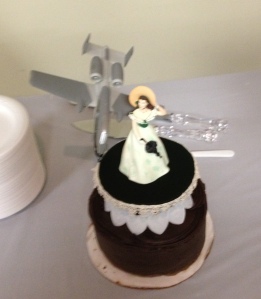