A few weeks ago in the midst of wedding planning there was a train show happening in town. They usually hold one in the spring and one in the fall, and Jay had missed the last two shows that they had. Not only does Jay like to work with remote control airplanes, but he’s also interested in model trains. He already had plans in the works for a train room in the new house.

Just to show you what other talents my sweetie has, here is the coffee table that he currently has in his living room. He designed the track layout for this particular train, and it really does move. When we move into the new house I think that the cats are going to enjoy this coffee table. It will drive them nuts because they won’t be able to get at the moving parts!

There were quite a few people at this show. Wherever you looked there was something that had to do with trains. There were big trains and little trains.

There were even themed trains! I had to laugh when I saw this one. I didn’t look very closely to see on which car the lamp was positioned.

There were even some trains that were set up and running. I’m not sure what the point of this display was, but it was interesting.

Being a farm girl I had to take a picture of this part of it.

There weren’t just trains, either. There were things for the scenery that you build around the tracks. I was amazed at all of these buildings. I was informed that the decoration of the scenery would be part of my responsibility. lol

There were engines, cabooses, and box cars. I’d never seen so many pieces to trains in all of my life. Every car had its own box. It was so cute!

Here are some train pictures.

You have little trains and then the BIG trains. 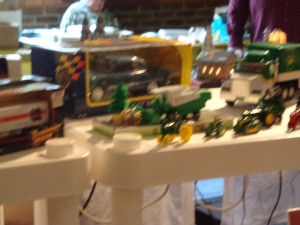 Besides trains, you also had other model things such as cars and tractors.

But guess what happened! At the train show I managed to find something that I liked. Can you believe it?? Yep, I walked out of a train show with two new books on the Civil War. Hey! I can’t help it! The guy was set up and I was just trying to help him out. He was a little disappointed, though, when I told him that I already had most of the books that he had on his table. lol

It wasn’t a very detailed explanation regarding the train show, but at least you were able to see some pictures. There’s not much to tell right now. Until Jay starts building more track layouts we don’t have much to do with them at his house, besides the coffee table. Once we move then he will be able to enjoy them a little more.

This entry was posted in Trains and tagged Trains. Bookmark the permalink.