This past weekend Jay wasn’t feeling well. He was coming down with a cold so he decided that he would just hang out in the basement. That was fine with me because I didn’t want him running around in the chillier weather with the wind blowing if he was getting sick. As I was doing a spring cleaning of his bedroom (and falling prey to the female urge to move furniture around), he decided that maybe it was time to do some spring cleaning in the basement. This was completely his idea and I am very proud of  him for undertaking this project. We each have to arrive at this point on our own; we can not be pushed to do so until we are ready. 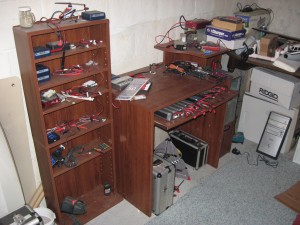 This is the only picture that I have of this particular area of the basement. This is where all of the battery chargers and electronic things are housed. His radios reside in the silver case underneath the desk when they aren’t in use.

You can somewhat see what progress was made in this area. You can actually see the entire table top! Jay did a great job of getting rid of things that he’s never going to use again, and organizing what he has over in that area.

This picture was taken last fall. The dead pile was cleaned up a few months ago, but Jay really went to town cleaning out this area. He has built so many other planes that he had no room for them. He decided to get rid of the planes that he hasn’t flown in years and really can’t foresee himself flying any time soon. 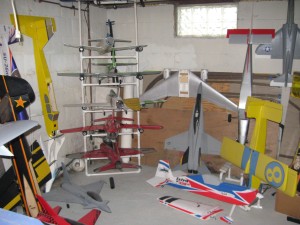 This is taken from a different angle, but you can see the amount of stuff that has been cleaned up. There is still some more work to be done, but I am really happy with how much Jay has done so far. Perhaps this will motivate me to clean out some of my books.

Here are some of the electronics that were reclaimed from the planes. The planes that were bandsaw-bound first had their electronics ripped out so that they could be used again. After all, there’s no sense in throwing out something that cost a bit of money and can still be used.

When Jay wasn’t cleaning, he was working on his uncle’s Sniper. This was the same kit that Jay had made for himself a few years ago and he had made some changes that helped the jet fly a lot better. His uncle bought the kit and then asked Jay to make those same modifications to this jet.

Jay’s Sniper is the middle one, under the Kobra and above the MiG. He was finishing up this jet last year when we started dating. *sigh* Such wonderful memories…

This is the latest addition to the fleet. This is a Viper Jet that came from the same vendor as the MiG. Jay is modifying this and will also put one of the quiet fans into it. He’s hoping to have it ready for eJets. It really is quite pretty in person.

The last bit of RC news that I have to share with you this week is that I’ve finally applied for AMA membership. Most clubs require you to have AMA membership if you’re going to fly at the field. As part of your membership you are covered with insurance should something happen. Since Jay is teaching me how to fly I thought that it would be a good thing for me to be covered in case something happens and I end up doing some property damage. Once I receive my membership card I will feel like an official RC pilot! lol