Sorry that it has taken me so long to update my blog with the rest of my SEFF adventure. I tried last night, but it just wasn’t cooperating. Hopefully tonight my blog will behave itself! 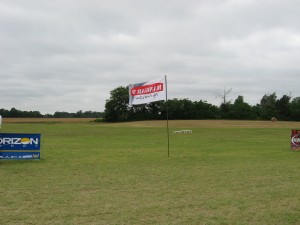 The wind was still blowing pretty good on Thursday when we arrived at the field, so we knew that there wouldn’t be a whole lot of flying going on. I think that Jay only took his Meteor up once the entire day. We were just happy to see our canopy still in its spot. 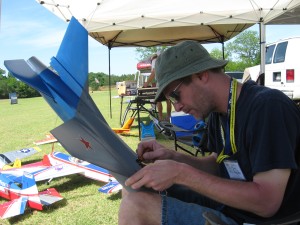 Since flying wasn’t much of an option some time was spent on repairs. Just to the F16, though, which had some difficulties the night before and had taken a nose dive into the ground. 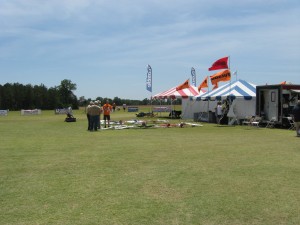 Even though there wasn’t much flying taking place, there was a lot of shopping! We took a few walks to see if the other guys had anything new sitting out, or if the vendors had added anything new to their wares. I’ve read that quite a few vendors left the event with empty trailers! 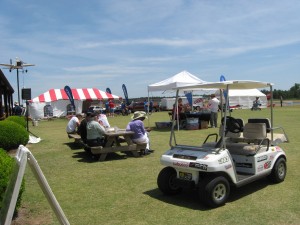 This was the main area near the vendors. Golf carts, mini bikes, motorized scooters, bicycles, and other types of conveyances were quite numerous. Depending on what you brought to fly you might have to traverse the entire length of the area just to spend a few minutes flying your plane. Having a mode of transportation made that easier on some of the guys. Jay and I just walked. lol 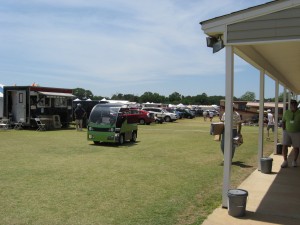 This is the corner of the hobby shop’s porch. You can see some of the campers, cars, and RVs in the background. There were more people there on Thursday, but we hadn’t seen anything yet! By Friday every spot for tents would be occupied. The official pilot count was 407 for the entire event, and that doesn’t include the pilots’ pit crew (as Jay called me… lol). 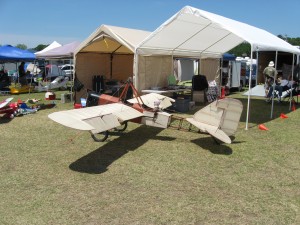 I began taking pictures of anything that I thought was interesting. This caught my eye. I’m really not sure what the story was behind it, but it reminded me of the plane that the Wright brothers flew at Kitty Hawk for the first time. It was large and quite impressive! 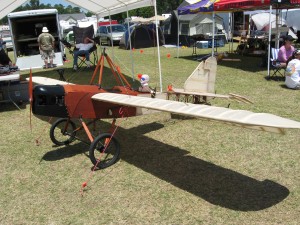 Look at the detail. Isn’t that amazing? And guess what… it wasn’t just for looks. 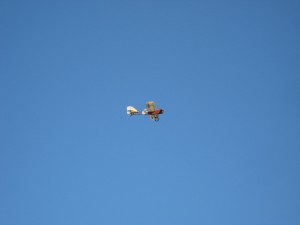 They actually flew it! It was put up into the air a few times, which irritated some of the pilots because it interrupted their flying space. I thought that it was neat. 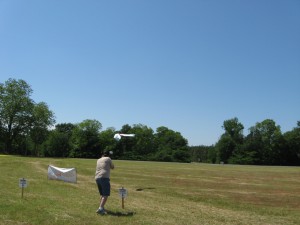 Besides the Combat event, I was looking forward to watching something else that the organizers had scheduled. Paintball!! You bought 100 rounds for $15 and then you could shoot the snot out of the foamies that they would fly in front of the designated spot. 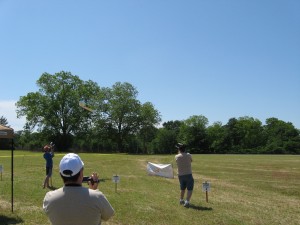 You would think that it should be easy to hit a giant foam wing with the paintball gun, but you would be surprised. Heck, just watching Combat every day proved that theory wrong! lol 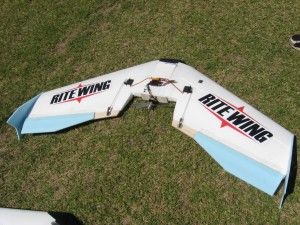 These are the foam wings that were used for paintball. Typically I saw these modified and used as an extreme speed aircraft. In fact, one of the pilots clocked his wing doing 204 mph! I didn’t really care for them because they had a high-pitch shrill sound to them and it drove my ears crazy. Thus I felt that paintball was a perfect use for them. 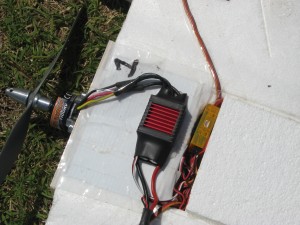 I took this picture especially for you R/C guys out there who recognize that orange receiver. They finally found a good use for it! lol 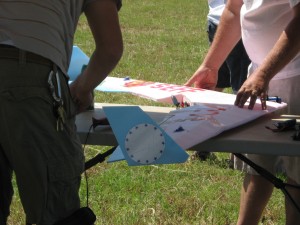 Even though it was more difficult than it looked, the wings would get hit. There were chunks torn out of them, rips torn into the foam, and other dings. When that happened they were tossed up on the table and repaired. Can you see what they are using to repair them? 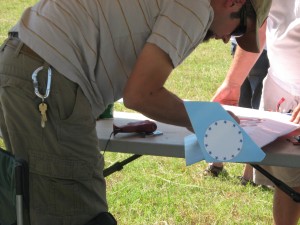 That’s right! Packing tape and a hot glue gun! lol. It doesn’t get much easier than that, does it? 😉 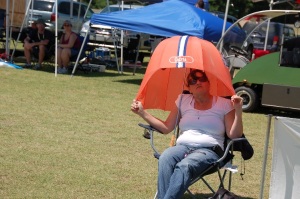 I took lots of pictures, but I forgot to ask anybody to take a picture of me and Jay together. Can you believe it? On the forum where Jay hangs out lots of pictures have been posted, but this is the ONLY ONE where we can be seen. So, this is our only official Together at SEFF picture. lol 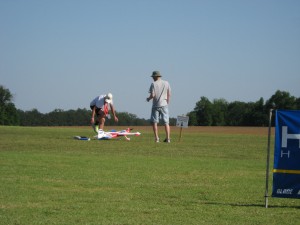 So Thursday was spent mainly hanging out, chatting it up with our neighbors, and visiting others around the field. There was some flying that was done, but not a whole lot. It didn’t matter, though, because we were having a great time!