This previous August I was reading through one of Jay’s AMA magazines and they had an article about SEFF 2011. SEFF stands for Southeast Electric Flight Festival and it’s held in Americus, Georgia every April. To be honest, that’s not what initially grabbed my attention. The fact that Americus is right next to Andersonville is what perked up my ears, or my eyeballs in this case. If you aren’t aware, Andersonville was the location of one of the most notorious Civil War Prisoner of War camps in the South. It was not a nice place at all. You will learn about that later when I post the pictures that I took of my visit there. For now, though, this post is about aviation and having fun. No depressing thoughts allowed!

Now, keep in mind that as of August Jay and I had only been dating for a month. He had been in the shower when I was reading his magazine so when he came out I informed him that we needed to go to SEFF. I wish that I had taken a picture because the look on his face was stunned surprise. I think that his next two questions were, “How do you know what SEFF is? And why do you think we should go?” lol Poor Jay! I don’t think he had any idea what he was getting into when he started dating me. 😉 Yes, part of my reason for wanting to go to SEFF was selfish. I will freely admit that. I’d always wanted to go see Andersonville and this was my opportunity to get somebody to go with me. Also, Jay’s birthday is April 20th so it would be a perfect birthday present for him. In November I made hotel reservations and that was that.

We cut up the first part of our trip so that it wasn’t too much all at once. We spent a few days at my sister’s place in North Carolina, and then headed down to Georgia on Tuesday. SEFF took place all week, but we were only there Wednesday thru Friday. It was a 16 hour drive home so we needed to leave on Saturday to give us some time to rest up on Sunday before heading to work. Ick. What a four letter word that is! 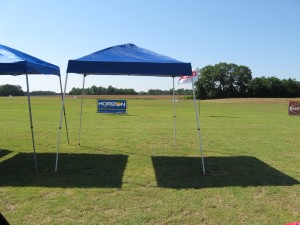 We arrived Wednesday morning, bright-eyed and bushy tailed! We had borrowed a canopy from my mom, so we staked a claim right on the front row in front of the sport plane flying area. Most of the people wouldn’t arrive until Friday and Saturday so we managed to get a nice spot. There were already a ton of people there with campers, tents, and RVs!

We were able to back the car right up to our canopy and unload. It was a gorgeous day and we were excited to finally be there! An hour or so after we finished setting up a gentleman and his grandson showed up and staked a claim to the spot next to us. Alec and Jordan were from Florida and were very nice guys. They were helpful and we had a great time being camped out by them all week. 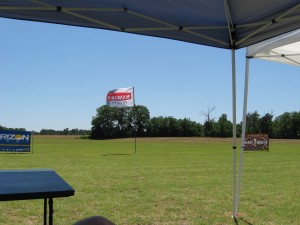 There was only one problem… the wind! I took a picture of the flag so that you could see what we were dealing with for the first two days that we were at SEFF. It was so windy that most of the planes weren’t able to be flown. Apparently it had been like this all week so very few guys had been able to get anything in the air. It was frustrating, but it gave us a chance to walk around and chat with the others.

One of the really fun things to watch was Combat. In fact, Jay and I are hoping to talk a few of the guys from his club into doing something similar for their air show in August. This was a riot to watch! Guys would build cheap combat foamies because they knew that they would more than likely get damaged. The guys would get lined up… 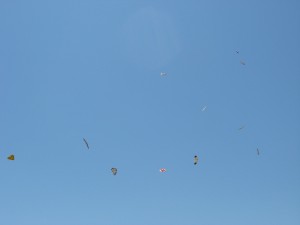 … and into the air the foamies would go! Despite the wind these planes flew really well! It was so fun to watch because you had this mess of things in the air and you thought for sure that it wouldn’t be hard to be hitting this swarm of stuff. 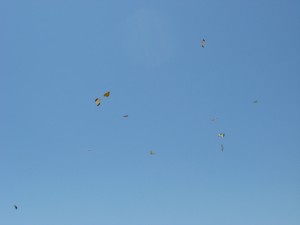 They were all prop-driven foamies so when they were up there in this mass it sounded just like a swarm of bees. The most amusing, and surprising, thing was the fact that it was a lot harder for these guys to knock into each other than you would think! I expected them to be falling out of the sky left and right, but they weren’t.

In fact, at a certain point they had to call out that the guys had five more minutes. In that time they had to get as many hits as possible because that was part of combat. This last part is important because the guy with the most hits is the winner. You might not be the last one left flying, but if you had more hits than the others before you went down then you won!

A good portion of the guys ended up on the ground due to the fact that their batteries ran out of juice. Very few were actually totaled, though it did happen. They would have their backup ready for the following day and could transfer the surviving electronics from the destroyed foamie into the new one.

An interesting part of the week was the fact that Jay became infamous at the show for a couple of reasons. One was due to his MiG (more on that later), and the other was because the story got around the festival about why he was there. When we signed in on the first day he told the guys that this was his birthday present from me, and that it had all been my idea (he left out the fact that it was due to my Civil War obsession and the proximity of Andersonville). They asked him if I could cook and he said that I could. “You better hurry up and marry that girl!” they kept telling him. lol. We would be walking around and chatting to somebody when they would ask, “Are you the guy who is here because it’s his birthday present?” Or he would mention where we were from and they would say, “You’re the guy whose girlfriend brought him here for his birthday!” It’s amazing how quickly word spreads. Even on Friday there were guys coming up and asking him if that was true.

There was definitely a lack of female presence at this event. There were some there, but for the most part they were hanging out around the campers or under the canopies. You rarely saw any of them at the flight line with their significant others. You should have seen the surprised looks when, acting as Jay’s spotter, I would call out “Taking off!” or “Landing, left to right!” I don’t believe that any of the women acted as spotters. A couple did go up to the flight line once or twice, but that was it. On Friday as we were leaving one of the gentleman who had involved us in conversation a few times stopped and actually thanked me for being there for Jay and supporting him in his hobby. As I’ve noted before, there aren’t many women who do that. This guy then gave us some advice about how to make a relationship last since he’d been married for 40 years (no, his wife was not at the event with him) and he thought that we already had things figured out. Wouldn’t that be nice! I did have to laugh because as we were saying goodbye to some of the event staff they again mentioned what a lucky guy Jay was because that was the one thing that had stuck out in their minds every time they saw him, how I had brought him down there for his birthday. This older gentleman, maybe in his late 50’s or early 60’s, said to me, “Darling, if he doesn’t do right by you and marries you then you give me a call! You can come down here any time!” All of those men and the only one to hit on me was old enough to be my father. lol