Friday was our last day at SEFF 😦 Due to the fact that we had a 16 hour drive ahead of us, we knew that we would have to leave early Saturday morning. I didn’t want to go. Jay reminded me that we both have savings accounts and could last a few months on that, but I knew that we needed to do the responsible thing and go back home. *sigh* Sometimes being responsible is not very fun! Especially when it means that you’ll be leaving wonderful 80 degree temps for the colder, snow-laden climate at home.

The nice thing about Friday was that the wind had died down! Woo-hoo! There was all kinds of flying to be done, and boy did we do it! Friday was also the start of some other events, such as demos and a parachute drop.

One of the highlights was the show put on by Mr. Hodges, the guy who owned the property and the hobby shop. He had built a B29 bomber with four gas engines. It was huge! It had a 30 foot wingspan!

They started up the engines and it was amazing how much it sounded like the real thing. Even though this was an all electric event, Mr. Hodges owns the property and can do what he want… including flying his gas-powered plane.

I really didn’t know what to expect, but I knew that just watching this aircraft take off was going to be exciting! Jay told me later that if this was the only thing that he had seen the entire three days, that the trip was definitely worth it. 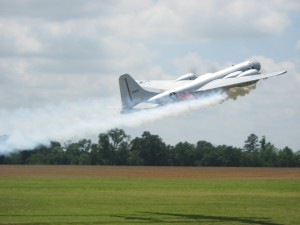 It took off and started doing a bunch of different moves that were absolutely amazing!

There was the flat spin… the rolling circle (which REALLY impressed Jay)… they HOVERED this beast just like the “3D flip flop” guys (that’s a quote from the announcer that day… lol)… and numerous other things. It ended with the B29 going into a loop and then landing upon completion of that loop. It really was quite amazing.

There was also a parachute drop. Instead of candy, however, there were prizes like CA glue, etc. Yes, those were grown men running around the field in the hopes of catching one of the parachutes that were dropped out of an RC plane. Just like at the airshow that Jay’s club puts on.

They held Combat every day during the event, which you saw in my post from Day 1. I had to take pictures on Friday because there had to be twice as many pilots as before. There were so many that they turned and had them facing away from the crowd just in case one of the foamies had an accident.

You can’t see it very well in this picture due to the size, but when I pull it up on my computer it’s the most interesting picture. There are already a ton of planes in the air, waiting for Combat to begin, but if you look closer you will notice that only half of the pilots have launched their planes. There were still more to go up!!

It created an even larger mass of swarming ‘bees’. A side note, even though there were more planes on Friday it took even longer for the swarm to really thin out.

One of the pilots had entered a glider into the fray and I thought for sure that would be one of the first planes on the ground. Boy, was I wrong! That dumb glider ended up being the very last one on the ground! I expected that such a large target would get a lot of attention. Apparently not! 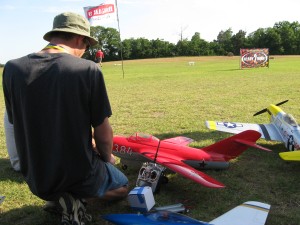 Now comes the part where I get to do some bragging. 🙂 With the wind at a more manageable speed Jay was able to fly one of his newer jets more often. This past winter he purchased a MiG 15 from Hobby King, did some structural strengthening, and added a 12 blade Change Sun fan. That fan makes all the difference in the world. It makes the jet incredibly quiet. 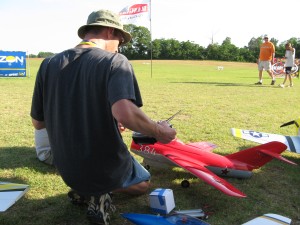 The first time he flew the MiG at his home field the guys who own the property made him prove to them that it didn’t have a turbine in it. This jet doesn’t have the typical whine that is associated with EDF jets. Thus every time he put it in the air he attracted attention. Guys wanted to know what the secret was to making it sound so great. Even the Horizon guys were paying attention.

After another flight a guy came up and asked Jay if he could do an interview. We really weren’t sure what the guy was interviewing for, but Jay said okay. I think that it was for some kind of video about the event, but who knows. He didn’t ask Jay to get naked for the interview so we weren’t too worried. 😉

The guy clipped a mic onto Jay and had him state who he was, that this was his first SEFF, and then he had to explain about his MiG and what was so great about it. Jay did a really good job. I was so proud of him! Not everybody at the show was interviewed, so this was really a great thing for Jay.

Jay never got tired of talking with the other guys about the MiG, either. I can’t tell you how many different pilots came up and asked specifics about the jet. Heck, by the end of Friday I could have told them about it. lol  Jay was always patient and was more than happy to share with the guys what he did to modify it. This jet definitely made Jay the talk of the event… yet again.

Unfortunately, the day had to come to an end. We packed up the car and took one last walk along the flight line. It was such a bittersweet moment and I tried to soak it all up. We’d had a great time over the past three days and I was sad to see it end. Jay said goodbye to various people he’d met, made sure to let the organizers know what a fantastic job they did, and then we walked back to the car. I have one more picture to share with you, one that I took off of the message board where Jay frequents for his RC stuff, but you have to hear the story first.

As we walked back to the car, hand-in-hand, and tried to take in as much as we could in our remaining minutes left at the field, there was suddenly a loud bang. It came from the paintball area and I thought that maybe somebody had shot off a rifle or gun of some sort. We rounded the corner to approach the car and that’s when we saw the smoke! Well, we couldn’t just leave without finding out what had happened. As we got closer we could see a group of guys putting out a little fire. What in the world had happened?? That’s when one of the guys picked up two pieces of burned-up something. It took a few seconds before we realized that it was a glider thing. Out where they had been shooting paintballs the Horizon guys were now tossing up these gliders that you launched like a discus. That’s when I noticed how close to the power lines they were, and that’s when Jay and I both realized at the same time that one of the gliders had hit the lines and that was the bang we’d heard. I was a bit confused because I didn’t know why it would have created a spark since it wasn’t grounded, but Jay informed me that these particular gliders have a carbon rod and that they are highly conductive. Thus the spark, bang and fire. It just so happened that somebody was filming their flight up above the field when the glider hit the wire!

Thus ended our SEFF trip. We had such a great time that we’ve already discussed going back next year. It usually takes place around the same dates every year so it might become a standing birthday gift for Jay. Next year, though, Jay will be spotting for me! 🙂