A Tour of My House!

I know that you guys have been waiting for this and it’s finally here! I have finally been able to get into the house that I’m buying and start working on it. The closing papers get signed on Wednesday (and I’m already in a bit of a panic about the amount of money that will be coming out of my savings account for a down payment!). I will take you on a tour of the house and then I’ll show you the work that has been done. I haven’t taken any pictures of the outside, so you’ll have to wait for those. Please keep in mind as you are looking at the pictures that I haven’t had a chance to clean or do much in there. I promise that I will make the house look way better than what you see here. 🙂

The main point of entry will be in the kitchen. First you walk into the kitchen: 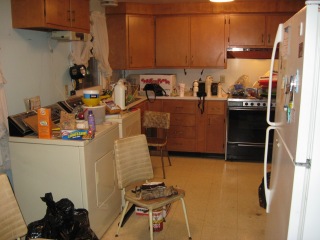 This used to be my grandma’s house and they moved the washer and dryer into the kitchen so that she wouldn’t have to go up and down the basement stairs (which is actually on your right when you are standing right here). I plan on moving the refrigerator over to the left where the washer and dryer now sit, and I’m trying to get my dad to make me something to go along the wall that I can use for more counter space. If you walked further into the kitchen and turned around to look at the area where you had just been standing this would be your view: 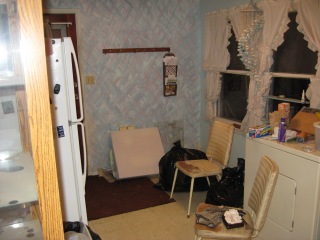 Just enough room for a small table. There is a deck that I helped my dad build outside of those windows, so the cats will enjoy sitting there to watch the birds. And here’s the business end of the kitchen: 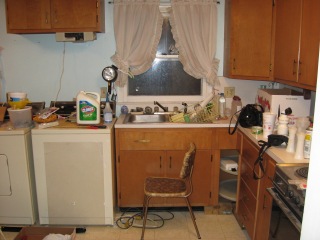 As you can see there is very little counter or cupboard space. Thus the reason that I want my dad to build me something to put along the wall where the refrigerator currently stands.

Then you would walk into the living room: 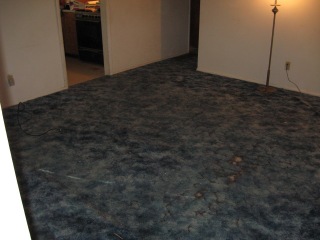 This picture was taken by the front door. You can see the kitchen doorway and then the hallway that goes down towards the bedrooms. My grandma had this carpeting laid in 1986. As you can see it has really taken a beating. Thus the reason why we have pulled it up. Due to my allergies I’ve decided that I want to refinish the hardwood floors instead of laying down more carpeting. I will show you those pictures later. The wall that the lamp is standing in front of will need some work, too. 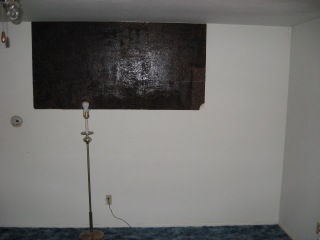 That brown block is a group of cork blocks that my grandmother had up there. She had pictures of her kids along the top, and then under them she placed pictures of their families. It was very nice, but needed to come down. It really left a mess so I will have to sand it down, possibly smooth it with joint compound, and get that smoothed out before I can paint.

Let’s take a walk down the hallway: 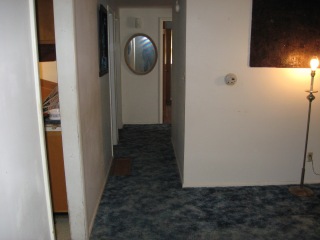 This isn’t a big house. It’s a ranch house that has a little over 900 square feet. Just enough for me and my two cats. The first doorway on the left is the bathroom, followed by the three bedrooms. So we’ll stop and look into the bathroom: 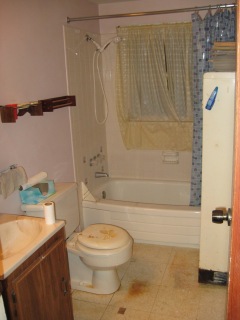 Not very big and currently needs to be scrubbed down. There has been a bachelor living here for the last five years, so keep that in mind as well. I’m not impressed with the window in the shower. Who puts a window there??? It has a wooden frame and regular glass, not the privacy kind. I hate the way that shower curtain looks over it, so I’m going to do something different. I’m not sure what because I can’t afford to take it out and replace it right now. I think that I will look into some marine paint (like what they use on boats) and then some frosting for the glass. Also, I would like to get a bigger vanity and sink. There’s room for it so I’ll have to see what I can find.

As we travel down the hallway the first bedroom on the left is the biggest. When you walk into it this is what you see: 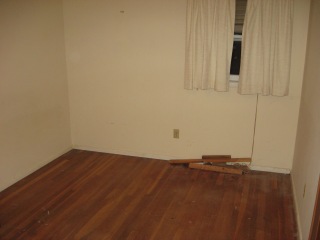 I know. It doesn’t look like much. And it doesn’t look very big, but it has a nice hardwood floor. When you turn around to face the door you can see the closet on the left: 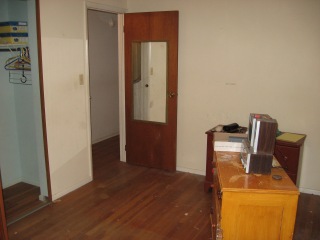 All of the closets are of a decent size so I should have room for all of my clothes. Hopefully. lol. Walking out of the bedroom the next one is on the left (or straight down the hallway if you’re walking from the living room): 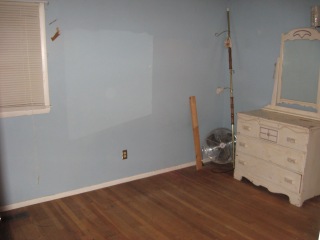 This is the second largest bedroom and is on the front corner of the house. That dresser was left behind so I’m going to repaint it white because this will be the spare bedroom where the day bed will be located. The daybed has a fancy white frame, so this will match nicely. Here is the view from this bedroom out into the hallway: 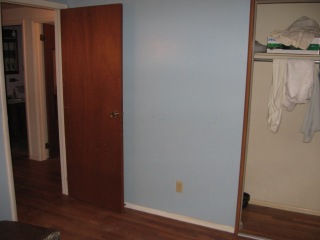 When you head out of this bedroom, straight ahead is a linen closet: 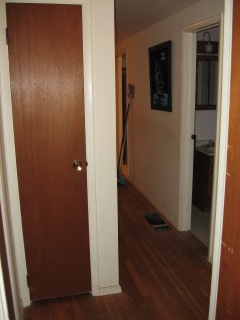 In this picture you can see that the carpet has already been removed. The bedrooms never had carpeting. And finally, the third bedroom. This is the smallest one and the one which will be my library: 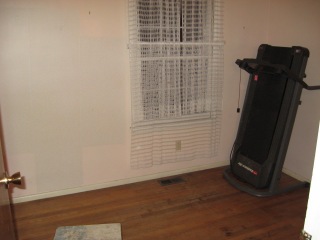 Not a very big room at all. Here’s the view from inside, and out into the hallway: 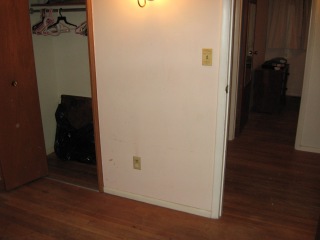 And that’s it! That’s my house in its entirety. I would show you the basement, but it’s just an unfinished basement. Nothing special. Plus, there’s still a LOT of junk down there that has to be thrown. *sigh*