Have you ever wondered about your ancestors? Do you look like any of them? Do you share any of the same characteristics? Perhaps the same type of hair? I think it’s kind of eerie how much the back of me looks like my great grandmother. She is the one on the left in the older photograph. I wish that their camera could have picked up more detail so that I can see just how similar my hair is to hers, but this is the best we can do.
I had never seen this picture of my great grandmother until my grandma passed away and we were going through her things. My grandma didn’t talk a lot about her life. In fact, my dad didn’t know how his parents had met until I asked her one day when we were visiting. I can’t remember the story exactly (which annoys me!), but he used to work for a casket maker, or something, and he would take naps in the caskets. His work was near where my grandma worked.
I don’t know much about either side of my family, actually. I wanted to know more, but I really had wanted to know if I had any ancestors who had fought in my beloved Civil War. I did find some on my dad’s side (I don’t think that any of my mom’s family was here yet), but that caused me to go digging away into my family history. I’ve been doing genealogical research for a few years now. When I discovered that the local history center was doing a Genealogy 101 class tonight I jumped at the chance to sign up. I should have realized that I would be the youngest one there… by about 15 years! Oh well. I’m used to it. lol
The Fenton History Center puts on various programs and really is quite a treasure in the community. Reuben Fenton, governor of NY State from 1865 to 1869 and one of the founders of the Republican Party, lived in Jamestown. His mansion that he had built in 1863 is now the home of the local history center. They have a very nice research library with a ton of sources, both local and not-so-local. I would really like to get back into researching my family, but I don’t really have the time or space for it right now. Once I move to my new place I will be a LOT closer and can spend more time working on it.
I have an ancestor from my paternal grandmother’s side who was kidnapped by Mohawk Indians when he was around the age of 8. They took him across the border into Canada where they held him hostage with some other people. Somehow he managed to escape after something along the lines of 6 months and he managed to find his way back to his village. Can you imagine an 8 year old doing that now??!! The problem is that I can’t recall where I found this information so I need to find it again.
Here’s one last comparison with which to leave you. On the left is a picture of my dad when he was young. On the right is a picture of me and my dad when I was young. Can you see the resemblance between the two of us when we were both young?? I definitely don’t have to worry about being adopted. 😉 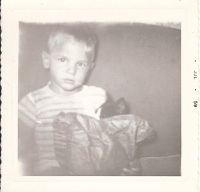