This was a VERY good weekend 🙂 I was able to spend some unexpected time with my very handsome pilot. This guy:

We had a great time just hanging out and enjoying each other’s company. We had dinner with his mom and I was VERY touched because she made sure that everything, including dessert, was gluten free! It really touches me when people go above and beyond to try to make things gluten free when they haven’t ever had to eat or cook like that.

Today I had to attend a Celiac Awareness walk that was put on by the Celiac Sprue Association’s Erie chapter. It’s always a good time. They have an awesome chinese raffle and a wonderful lunch, including a GF Dairy Queen ice cream cake! I didn’t actually participate today since I was the Udi’s girl.

It was a beautiful day, but I was anxious to get back to Jay so that I could spend what few hours I had left with him before he had to go to work and I had to head home. And since he works third shift I was looking forward to taking a nap with him since I was exhausted after being out in the sun all day. lol

Well, I got back to his place and what do I find on his counter waiting for me?

A dozen red roses! Out of the blue! They had a card in them that really touched me and I had to hold back the tears. He’s so sweet, though he won’t admit it. I keep telling him that I’m the luckiest girl in the galaxy. It’s definitely true. That’s why I do my best to try to spoil him, though not too much. 😉

I would like to share something that I designed for Jay. He creates his own fiberglass brackets and housings for his jet’s fans. He’s so smart when it comes to that sort of thing. He even taught me how to lay up a fiberglass housing so that I can help him. Well, he saw my angel square that I was stitching and wanted to know if I would be able to do that on the fiberglass fabric since it’s woven very similarly to my stitching fabric. I drew up some designs and showed them to him this weekend. This was his favorite: 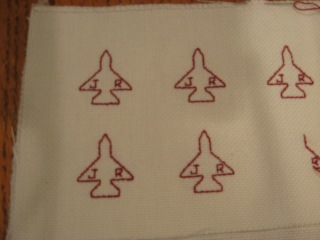 I am not an artist by any stretch of the imagination, but I did my best to create something that made me think of him and that was fairly simple in its design. What better is there to represent my Dearest than a jet?? And his initials, of course. I was pleased as punch when he was falling over himself with excitement. He automatically thought of other things on which he can imprint this design. I didn’t think that he would be impressed with what I had come up with, but luckily he proved me wrong. I don’t mind being wrong in these cases. 🙂 Thanks for letting me brag.