An Open Letter to Congress

I know that you had a busy day today, what with advancing the ruin of our country, but I hope that you can find a few moments to read this letter. I will not hold out any hope that you will actually pay any attention to it, however, since you have so far enjoyed going against the wishes of the American people. It really amazes me how quickly most of you can so easily forget how you attained the position which you currently hold. With any kind of luck this will be the last term that most of you will serve. It’s been fun, but we need responsible adults in Washington D.C. in order to get this country back on the right track. Despite your many promises you have become like errant teenagers who are unable to do the right thing despite your promises to us time and time again.

I had hoped that after this last election that you all would recognize that the American people are tired of the extravagant spending and flagrant disregard for this country. The fact that 67% of the American people did not want Obamacare, and yet you shoved it down our throats, showed us that you feel that you are above the “common people”. Must I remind you that our country was specifically set up to be governed for the people and BY the people?? That means that you were elected to speak FOR us, not DOWN to us!!

There are a few members of Congress who can ignore this letter because I already know that they are doing all that they can for us: Michelle Bachmann, Jim DeMint, and Rand Paul to name a few. To you members I want to thank you from the bottom of my heart. I know that it must feel like you are all alone in that group of country haters, but those of us who work for a living realize that you’re trying to bring our country back to us.

For those of you in Congress who have never actually held a real job (and this also includes you, Mr. President), work is when you put your time and energy into earning income that will support you and your family. This income is earned through hard work and sweat. You know what sweat is, right? That’s the liquid that runs off of you when it’s hot or when you’ve played one too many rounds of golf. Us “commoners” often work long hours in order to earn enough to live comfortably, that is we try to earn enough. It’s kind of hard to live our lives as we would want when you are constantly reaching into our pockets to hand our hard-earned money to others who feel that they don’t have to work for a living, that somehow they deserve to be handed everything in life. That is NOT the American way! If they want to live in a socialist country where the government takes care of them then allow them to move to Europe or even Canada. There is no such thing as Social Justice or shared sacrifice. Let me tell you something that I had to learn when I was young: Life is not fair. Whoa! Did I hit you too hard with that one?? Sorry, I’ll try to soften the blow next time.

The Progressives (both Democrat and Republican) and Liberals have completely changed the definition of the American Dream. For years and years people have flocked to the United States because it is (or rather, WAS) the one place in the world where all you had to do was work hard and you could be a success. You weren’t kept to one social class. You had the freedom to work as hard as you wanted and to gain as much fortune as you could want. Instead, you now decide to punish success. I believe that I heard the President refer to the wealthier people of our country as the ‘fortunate ones’. Guess what? Not all of the wealthy people inherited their money. Quite a few had to actually work hard and sacrifice a lot to get to where they are. And now you are going to take their money away from them because you feel that the family who has been on welfare for generations because they are too lazy to get off of their butts and earn a living deserves to be handed the money from the rich guy. The sad thing is that you’re doing this on purpose in order to bring down the country as we know it. Why do you hate the United States so much? Did your mother not hug you enough as a child? Did your father spend too much time with his mistresses instead of spending time with you? Whatever it was you need to get over it!

In closing I have one thing to say… the government needs to get out of our business and allow the hard working Americans do what we do best and get our country back into order. You have two choices, dear Country Hating Congress people: 1) Leave the country alone… get your hands out of our pockets and stop telling us what light bulbs we are allowed to use. Stop with the over regulating of the country and ‘knowing what’s best for us’. We are a country of smart people so I’m sure that we’ll be fine without you micromanaging us; or 2) LEAVE!! If you don’t like our country and you prefer the way that Venezuela or Iran works then move there! This is OUR country. On behalf of my fellow God-fearing and Gun-Toting Tea Party members let me say that you aren’t welcome here anymore! In 1776 a small group of rag-tag colonists managed to tell the British exactly what they could go do, and we can do it again. I’m not saying that we’re going to rise up in a physical revolution, but we will get our country back. You may do your best to destroy it, but what you can’t destroy is the love in our hearts for the United States. You can never tax away our pride in what America stands for, or what she stood for. You can rewrite history all you want, but we know the truth and will continue to shout it from the highest mountains.

Thank you for your time and consideration.

P.S. – I am including a picture of a portion of my fellow Proud Americans who would like Congress to stop destroying our country. This is just the tip of the ice berg. The rest send their condolences that they couldn’t appear in the photo. They were unable to take time off of their jobs so that you could be paid your undeserved salaries: 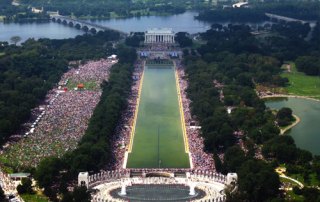 1 Response to An Open Letter to Congress