I have just recently been introduced to something new. The hobby of remote controlled airplanes. I knew that they existed and that guys really like them, but that was about all I knew. I had no idea about the time, expense, and various skills that this hobby requires. I had seen a small sampling of what was involved, but I had my eyes opened when I attended a Fly In on Saturday.

First off, let me put in a plug for this group. Here is their official site: ThermalGRCClub.

I didn’t take a lot of pictures because I didn’t want the guys to wonder what I was doing, but I tried to get some pictures. There was quite a range of air craft there, between the electric planes and the gas powered planes. 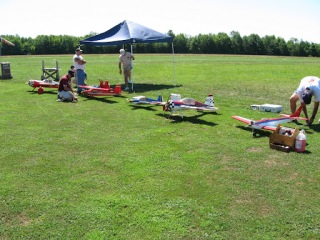 Most of the planes in this picture are gas powered. In order to get them ready to fly you have to turn the propeller until the engine catches. Like in this picture: 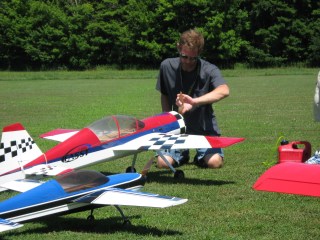 It’s quite interesting to watch the various things that these planes can do in the air. Watching them fly you think that it looks easy, until you watch the operator using the controls. Their thumbs are constantly moving to get the planes to do tricks and other things. I wouldn’t dare try to fly one because I know that I would crash it and they aren’t cheap! You have to know what you’re doing. 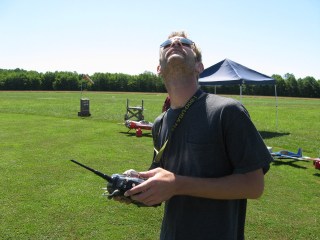 It is definitely an interesting hobby. I really enjoyed watching the different guys as they flew their planes, or jets. I enjoy watching people do what they love. They are having an air show in two weeks. I can’t wait to see what all that involves! 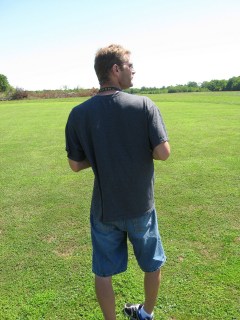