It’s been almost three months since I last posted on this blog. Not because we haven’t done anything, but because I’ve been so busy that I just haven’t had time. I didn’t do any sewing for almost a full two months (more about that in a later post) and Jay’s work schedule was all over in September, and in October he was in Michigan for work the entire month (except the weekends). The other big thing that happened was we added to our household. Labor Day weekend I brought home three adorable guys. 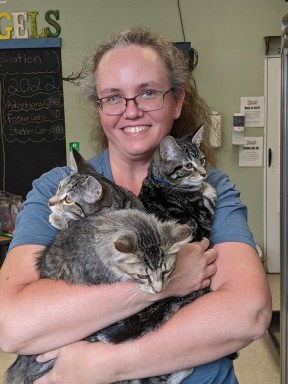 I would like to introduce Toby (in the front), Demetri (back left) and Mikhail (right). I have volunteered at the shelter for 2 years and these were the first guys that I had to take home. I really tried to resist it because I didn’t want to upset Bob, but we had two big adoption events that I had to choke back tears when I said my goodbyes to them (I was sure they would get adopted), but they were always there the next time I returned. I decided that the only home I wanted them going to was mine. 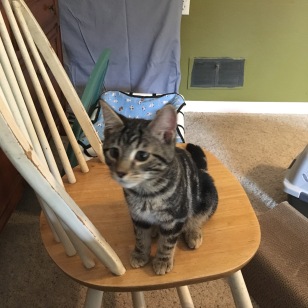 Poor little Mikhail had an upper respiratory infection when I brought them home. I was given antibiotics for him and so I gave him meds for 10 days. I also kept them quarantined so that Bob didn’t catch it. Luckily the other two never came down with it. At the shelter Mikhail’s name had been Penguin, but I couldn’t bring myself to continue to call him by that name. He is a smaller cat with somewhat stubby legs, but he’s got enough personality and character for two cats twice his size.

Demetri and Mikhail were litter mates, but Demetri was a lighter gray and a slightly bigger stature. He had so much energy, though! He and Mikhail loved to rough-house all the time. My legs were constantly scratched up because Demetri insisted on playing with his toys against my legs and feet. He was very affectionate. The first day that I had to go to work after I brought them home I ran home during lunch to check on them. He was so happy to see me that he had to jump up and give me kisses. 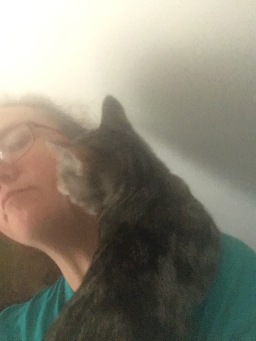 Yes, I’m talking about him in the past because two weeks after bringing him home he suddenly wasn’t acting like himself. I contacted the director of the shelter and she let me bring him in immediately to be checked over. She didn’t like what she saw, so she sent me to the vet as an emergency case. We ended up taking him to an animal hospital an hour away because his blood sugar level was critically low (and the glucose drip the regular vet had him on didn’t hardly budge it) and they thought his liver felt enlarged. I still don’t know what caused his problems or what he had because the next day he went into cardiac arrest and we lost him. I only had him for two weeks, but he was a sweetheart and we all miss him so much. 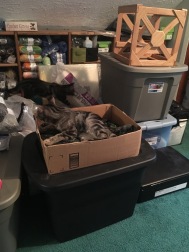 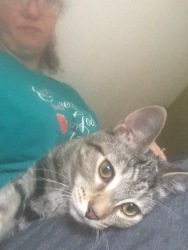 To be fair, Toby was the one I first fell in love with when I saw him in the shelter. His litter came in on a Sunday and by Saturday, when I’m there, he was the only one left. He was so loving and cute. He just wanted to be held and carried around. He was placed in the kitten pen with Demetri, Mikhail and two of their siblings. Eventually, it was just the three of them in the pen because the others had been adopted. I knew if I took Toby I would have to adopt at least one more kitten to keep him company (in case Bob decided he didn’t want anything to do with the new babies). However, there was no way I could take two kittens and leave one behind. No kitten left behind. So I adopted all three.

Look at that little face. Toby was so happy to have a forever home. In the shelter his name was Tobias, but I started calling him Toby and now I can’t call him anything else. The boys were in the shelter for over a month before I finally decided to bring them home. They were almost 5 months old. Toby is only a few days older than Mikhail. 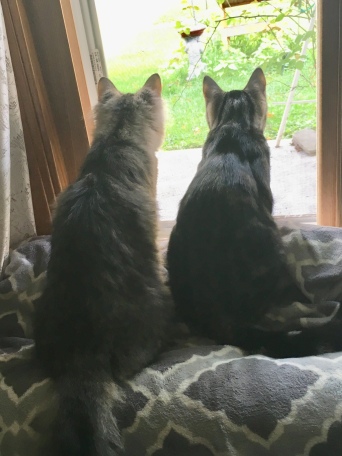 You guys, it had been 17 years since I’d really had kittens in the house. Since they were quarantined upstairs I had to split my time between them and Bob. After Demetri was gone I told Jay that we had to start the introduction process because I had too much to do to hang out in their room with them for hours at night. We did it very slowly, and in stages, but it seemed to work okay.

Bob wasn’t quite sure about them at first, but he was curious enough to keep an eye on them. After he realized that momma still loved him he decided that maybe they weren’t too bad. 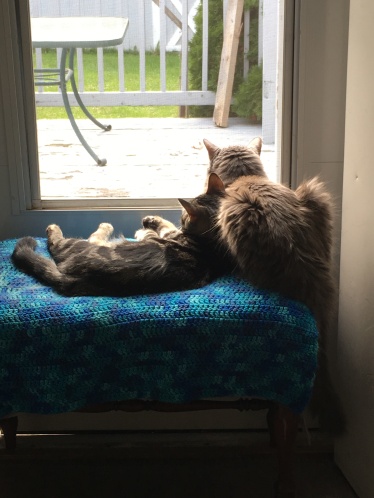 Things were going smoothly with the babies and Bob, so I thought that we were good-to-go. Then suddenly Bob was not himself. It had only been two weeks since I’d lost Demetri, so I was afraid that maybe I was being overly-sensitive and prone to seeing illness where there wasn’t. It was like a switch had flipped; one day he was Bob and the next day he was an old cat. He didn’t want to eat and wasn’t drinking much. Of course, this all started happening on a Friday. By Saturday I couldn’t get him to eat anything and I was sure that this was the end. I spent that entire day watching him with an eagle eye and crying. Sunday morning I woke up and determined I was going to get him to drink water no matter what, so I grabbed the tiny syringe that I’d used for Mikhail’s antibiotics and I made Bob drink water. Once I’d done this a few times I put him down and he drank and drank and drank on his own. I was worried about him getting sick since he hadn’t hardly eaten or drank anything in two days, so I had to try to moderate his intake. After church we stopped at Walmart so I could get a bigger syringe and some baby food. I syringe-fed him that day. He didn’t eat a lot, but at least he ate something.

I got him into his vet that Monday morning. They did bloodwork, gave him a pill to kick-start his appetite, and gave him some IV fluids because he was dehydrated. They did a few other tests, but the vet heard a heart murmur so he also ordered another cardiac blood test. Everything came back normal and in very good ranges. The only thing that was off was one of the indicators of muscle damage. The vet speculated that this was probably heart damage, but we had to wait for the other test to come back. When it did it showed that there was heart damage. We don’t know if Bob had a heart event that caused him to stop eating and drinking, or what, but the vet said the next steps were to take him to a cardiologist for an echocardiogram. Except, my two options are at least an hour away.

Isn’t he so pretty? If I thought it would help and there would be something that could be done, I would take him. However, he’s 17 and he hates car rides. If he has heart problems I’m afraid the drive to the clinic, plus the length of time they would have to take him away from me for the test, and the drive home would be a HUGE stressor on his heart. Then what? If there’s heart damage what can be done? He has no other symptoms of the usual things that cause heart murmurs (virus, infection, etc), so there’s really not anything they can do. I don’t want to put him through all of that stress for nothing. I made the decision to not take him to the cardiologist, and instead I’m going to spoil him as much as I can for however much life he has left with us. Luckily, *knock on wood*, since his visit to the vet he has been doing very well. He eats like a champ, drinks as much as he should, and seems to be almost normal. I’ve noticed lately that he seems to be moving a little slower, but he’s old. There are times he’ll run around with the babies and I find myself yelling, “Bob! Don’t be running around like that! You have a bad heart!” He doesn’t pay any attention, though.

You’re probably tired of reading about my cats. I just have a few more things to say, and then I will post a few more silly pictures. Toby is so chill. If you’ve ever seen the US sitcom The Office then I can tell you that his personality is very similar to Toby in HR. He is so laid back and relaxed. It’s almost a Maine Coone personality. The silly thing is that he is not at all cuddly and clingy like he was in the shelter. He wants to be near me and get attention, but he doesn’t really want to be held.

Mikhail, on the other hand, has to be held. He won’t just lay on my lap, either. I have to actually hold him up on my chest. When he wants to be held he either gets up high enough where he can stretch his front paws up on my chest, or else he simply launches himself at me and expects that I will catch him.

Here’s a picture of him while I was holding him:

Doesn’t that make your heart melt?

So these guys have been a big part of why I haven’t been blogging. Between sick cats and just trying to get them introduced into the house my time was not my own. As you can see from the picture of them above, even when I try to do anything in my sewing room I have supervision. But that’s okay. They are spoiled and loved beyond measure.

Toby sleeping on the cat tree: 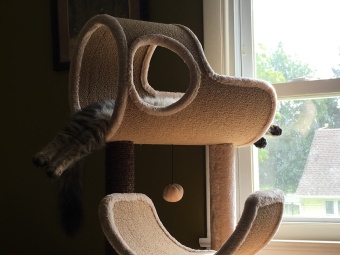 Mikhail in the middle of a sneeze: 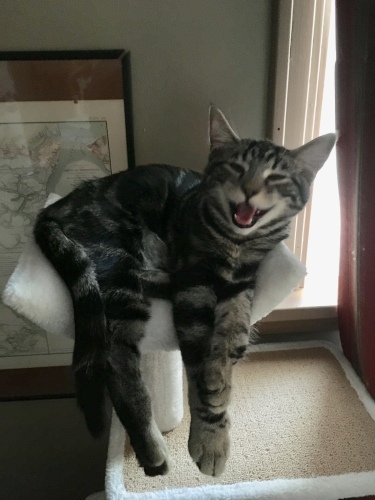 This entry was posted in Cats and tagged Cats. Bookmark the permalink.