A Shot At Pen Turning

While we were visiting my sister, Jay and I went to a woodworking store to pick up the stain and finish that I wanted to use for his mom’s dining room table (I promised to help her refinish it). We don’t have one of these stores near us, so it was neat to just walk around.

As we were walking around Jay suddenly remembered something that he’d seen in the store’s catalog. Before I knew it, we were standing in front of the supplies for turning your own pens. Jay decided he wanted to have a go at this type of woodworking, so we bought some insert kits and a few blanks.

When we got home we watched a couple of YouTube videos about pen turning (isn’t that how you learn how to do everything now?) and then Jay headed to his workshop. Before long he brought his finished products to me to see.

I thought they turned out rather nice. It’s hard to get a good picture with the bright LED lights in the workshop.

Jay took his pens to work and a lot of his coworkers didn’t believe that he’d made them himself. You would think by now they would know that if he says he made something, he probably did. Anyway, another coworker brought him a mechanical pencil and asked if Jay would be able to make the barrel out of wood. Jay likes a challenge, so he brought it home and in one night did this:

His coworker was so impressed that he is supposedly going to bring the other three that he purchased for Jay to make wood barrels for them, too.

A few more coworkers have been eyeing his pens, so guess what showed up in the mail today? 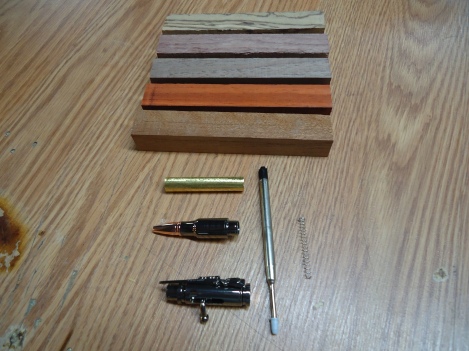 Yep. Guys, I think we’ve unleashed yet ANOTHER monster…

This entry was posted in Pen Turning, Wood Work and tagged woodworking. Bookmark the permalink.