In the summer we usually head to my sister’s for vacation. However, due to the current plague, Jay’s work was being less than cooperative so he still took vacation… at home. Don’t even get me started….

The good thing about the time off was that it allowed him to get some projects completed and others started.

Remember the TV center he was working on?

That was completed, though it has not been finished.

He bought some luan for the back of my bird feed cubby and then disassembled it so that I can more easily finish it.

That is waiting in line behind two other projects that are on my bench.

First up is the Cat Food cubby.

All I needed was a second coat of paint. And now I have to flip it over and paint what is the bottom in this picture. Oh, and fix the oops… 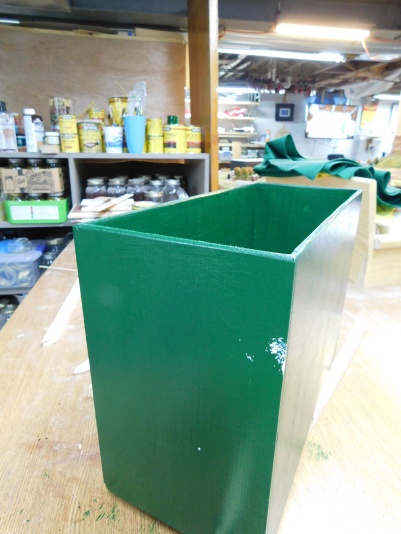 This is why I shouldn’t be allowed to hold a paint brush in my hand. I make such a mess! You see, I was painting the second project on my bench when I somehow managed to bump my brush into this cubby. I have at least a span of 12″ in between the two projects, but I think I could have 12′ between them and I would still get paint on the cat food cubby.

The second project on my bench:

This is the At-At that Jay made a few years ago. It looked like this:

It was painted gray, but badly needed a second coat. I’ve decided that I’m going to have Jay drill a few holes in its belly and build a bit of a platform for the inside. Then I’m going to set it out with my other bird feeders. I wanted to make sure it’s protected, though, so I used the only exterior paint that I could find as my base coat. I’ll then paint it with acrylics and seal it for some extra protection.

I haven’t made much progress on my part of the finishing because I was crocheting during my vacation (to be posted at a later date).

Oh, in order to make room for everything else I finished the shelf I had on my work bench and Jay installed it in my sewing room.

It’s next to the TV because originally I was going to place the DVD player on it, but the shelf is too shallow. Instead I’ll place miscellaneous knick-knacks and my rotary cutters on it. Penny is still standing on my cutting table.

One of the other projects Jay worked on was a trivet that he cut a design into using his CNC Router. There was an article in the September 2020 Wood Magazine with these trivets in it and he wanted to try it. They are two-sided with two different designs. They are actually kind of neat. 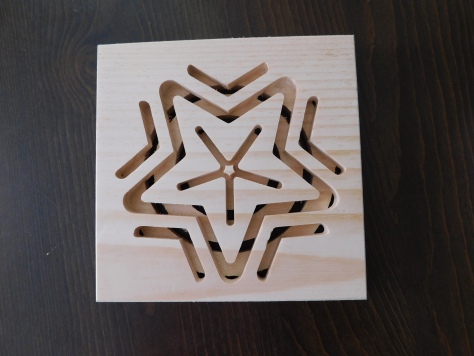 I think these might make nice Christmas gifts. I’ll just have to give Jay a list of what design should go on what side. I figure initials and easy-to-draw designs would look really nice.

That’s about all that is happening in the shop right now. Since we were unable to go on vacation, why don’t you join me at our pool…