It wouldn’t be Spring on this blog if I didn’t have some concrete statues and roses to show you, right? To be fair, I only bought one new concrete statue this year and it’s going to be given as a gift. The others are from a few years ago. You might remember them:

These two have been sitting on my work bench for a few years.

As you can see, I started painting the Confederate Soldier. I stalled when I got to his face. I’m not good at painting faces and I didn’t want him to look crazy or goofy. I was also having problems figuring out what color to paint the cat. I entertained the idea of painting another orange cat, but I really am not good at painting and didn’t want it to look bad. And so they sat… and sat… and sat. They silently judged me for hiding them in the basement instead of letting them soak up the summer sun. I couldn’t take their judgmental stares any longer.

I cheated on both of them. This is a Confederate Soldier, as his belt buckle clearly states ‘CSA’, so I decided to paint him all gray like one of the many monuments that are scattered across the Civil War battlefields in this country. Even though I know he’s a Johnny Reb, my hope is that people will see him as a generic Civil War soldier who was brave, courageous and played a very important role in the shaping of our country. If you read any diaries from back then you will know that not all Yankees were rabid abolitionists and not all Rebs were whip-bearing slave owners.

This American Soldier will be very welcome in my garden.

You’ve just received a glimpse of the cat. I cheated with him big time.

The pour wasn’t very good into the mold so he has bubble spots all over. Yes, I painted him white. When I was a kid I had a white cat named Frank who had green eyes. That’s the cat I kind of modeled this one after, and yet as I was painting him I couldn’t help but think of the outside cat my sister had a few years ago, Scruffy. I may actually end up giving him to her to display by her pool. Her husband might end up disliking me because once I’ve filled my yard with concrete cats I will fill hers, too.

Finally, the concrete statue I painted for my dad. This will be a Father’s Day gift. Are you ready? 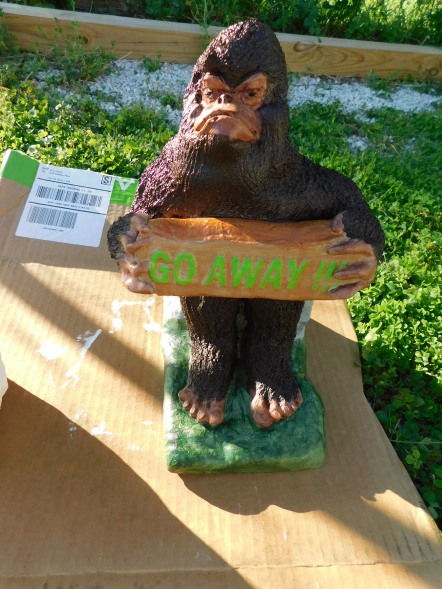 It’s suppose to be a big foot. It actually looks more like a deranged monkey, but I guess that’s okay because the most important part is the sign. I painted it with glow-in-the-dark paint so hopefully the ‘GO AWAY!!!’ will glow.

He’s sitting there on a rock with his sign. Isn’t he cute? I think this will look great by the back door.

I have one more concrete statue to paint, but it’s another one with cats and so I’m stuck trying to figure out what colors I want to paint them. Hopefully they won’t sit around for two years waiting for that to happen.

In the meantime, my roses have been doing pretty good!

This is my corner rose bed. This yellow rose bush is a little ornery. The flowers start out that dark yellow and then lighten right up. That’s their actual color. It’s not due to lighting or anything. If you notice, the bush with the red roses in the back still has a LOT of buds that have not yet opened. It’s going to be GORGEOUS when they do! I was outside the other night and I had two different ladies tell me how beautiful my roses look. 🙂

I have a new favorite flower for my garden. 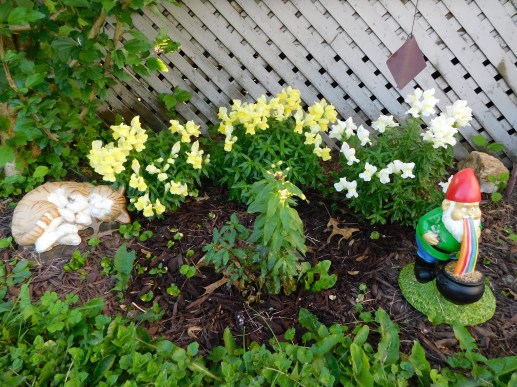 Apparently the gnome does not agree.

What I love about these flowers is that even though they are considered an annual, mine often come back for a second year. In fact, all of these in the picture were planted last year and came back this spring. I like utility plants that I can get more of my dollar’s worth! These weren’t the only ones that came back. I had one up front that made an appearance this spring, too.

I did plant the little guys in front of it, and am trying to persuade the dandelions that they do NOT belong. They are not listening to me.

I promised another picture of my front garden where the bird bath resides once I had cleaned it up a bit. 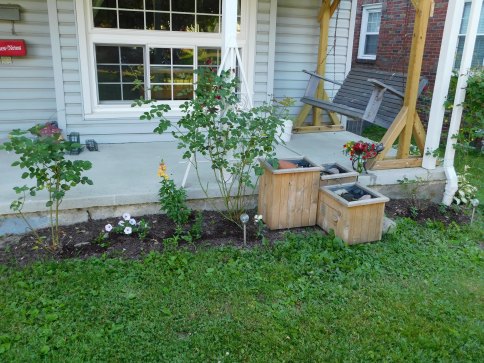 I don’t have an eye for landscaping, so I just fill in around the rose bushes with whatever flowers I like. In this picture are roses, pansies, snapdragons, and some pretty little flowers in my cat pot.

Even though everybody has them all over, I thought I would share a picture of my rhododendron bush at the end of its bloom.

This bush is in serious need of a hair cut, but I will wait until the petals have all fallen off of the flowers. I just don’t like it leaning over the eaves like that. I’m sure it’s clogging up the trough with its detritus. I won’t cut it back too much because Bob’s bench is right by this window and he loves watching the birds and chipmunks that play in it. In fact, there’s a nest on a branch close to this window. I have no idea what bird built it as I’ve never seen any in it, but it’s there.

As I wind up this tour of my gardens, let me show you how to “upcycle” a gate.

During the summer of 2013 we put in the cement driveway and took down the length of chain link fence along that side of the yard. For whatever reason we left the gate hinged to the other side of the fence, near where my roses live.

(The gate was on the right hand side of this picture, next to that hosta)

I finally asked Jay if we could remove it after almost seven years. I decided that I was going to use it for my tomatoes. I bought a cherry tomato plant and will secure its vines to the gate as they grow.

Looking at this picture, though, I can’t believe how big my rose bush is now! This would have been 2014, I think. Here is that same rose bush last year:

*sheds a tear* They sure grow up quickly, don’t they?