I couldn’t post these earlier because I didn’t want to ruin the surprise. Now that she’s had the baby and is using these, I can show you what I made for Pauline.

When Pauline told me that she was going to have a little girl due at the end of February I instantly started thinking about all the things I could make for her. Then I put on the brakes and decided to start slow. I was almost hesitant to make blankets because nowadays some mothers won’t use them at all due to the threat of SIDS. Other people just don’t like handmade/homemade items (although, Pauline isn’t one of those).

Lion Brand had a screaming deal on their Cute As A Button chenille yarn and I couldn’t resist. 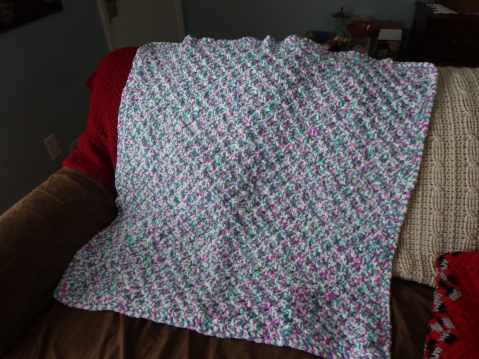 Please excuse the lighting in the picture. In the dark dreary days of winter it’s hard to find any time with natural light, and this was the best that I could do before sending these out.

This blanket isn’t very big, but it’s really squishy! That chenille yarn makes it extra soft and very dense. I thought that this would be a great floor blanket. 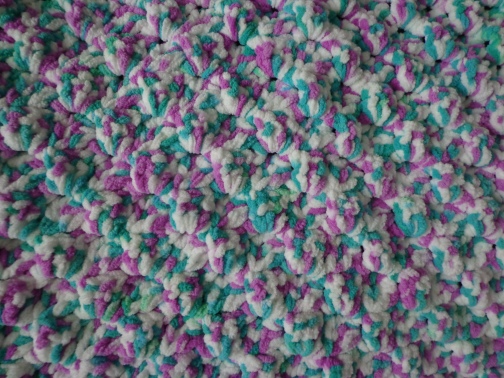 See how dense and squishy it is! This will easily protect her delicate head while laying on it, plus give her a little room to roll around.

It was a free pattern (I think on Premier‘s site). I had wanted to try making a corner-to-corner blanket and this was the perfect excuse. I think it turned out really nice.

I had asked my coworkers, one of which has very small children, what was the best gift they had received for their babies. One said burp cloths (which I’m in the process of making now) and the other said lacy blankets. Her kids still carry theirs around and even if the blankets cover their faces they can still breathe. With this in mind I searched around and found an interesting pattern that I wanted to try. It came out of one of my Crochet World magazines. 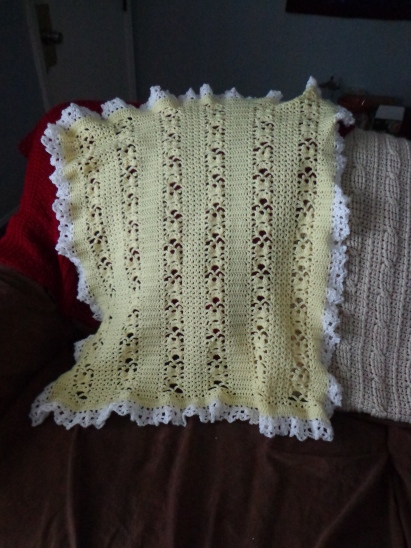 I was a little disappointed with the size when I was done, but I think it should be a nice size to be used in conjunction with the car seat. And the pattern was very interesting.

I resisted the urge to go out and buy yarn specifically for this since I’d been given a ton of baby yarn about a year ago. 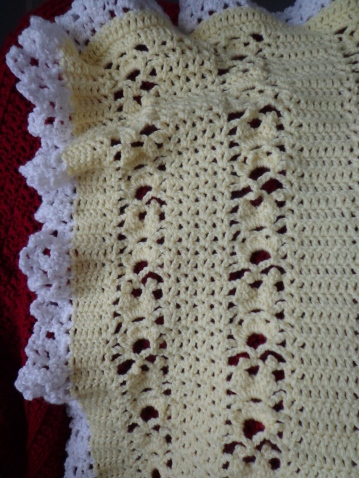 Even though I knew the baby was a girl I couldn’t bring myself to use pink yarn. I wanted to use blue. I love blue so I think the baby will as well. I didn’t use blue, though. Instead I played it safe and went with this soft yellow. My younger sister had a yellow baby blanket that she dragged every where and that’s all I could picture when making this one.

Pauline and I have been best friends since 1st grade so my mom also sent some gifts. 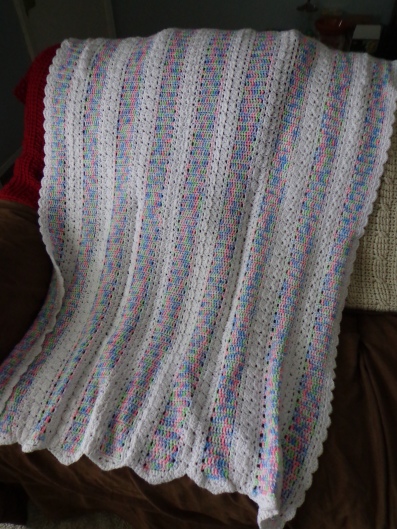 I thought this was really pretty. It even has blue in it!

I’m not sure what pattern she used, but it looks like a mile-a-minute pattern to me. Christa from The Secret Yarnery has an easy tutorial for the mile-a-minute design, including a shawl that I want to make.

My mom also quilts and I thought this blanket was absolutely adorable. 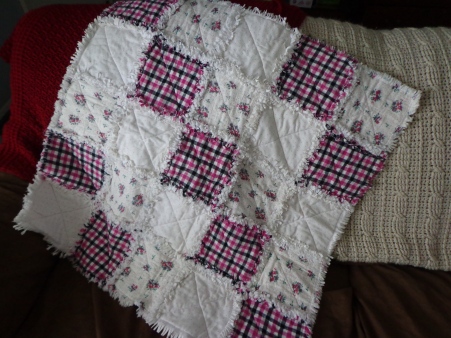 It’s small, but I think it would work well in the car or on the floor. It’s made out of flannel and is very soft.

Since I don’t quilt I’m not sure what this technique is called, but it reminds me of the chenille-styled pillow she made me years ago (which is actually starting to fall apart because I’ve been using it a lot lately).

This is all that I have to show for now. I will have more in the future because I have thought of other things that I want to make for Pauline’s baby and my other friend’s baby (due at the end of August). So you better settle in because we’ve got lots more baby stuff coming down the pike!

1 Response to Baby Blankets for Pauline