Every year Jay and I like to make a few gifts. This year we tried to make even more than normal. I will post about the gifts we made in a few separate blog posts so that they are easier to digest.

First up we have a coffee table that Jay’s mom wanted him to redo the top. There was some pretty heavy water damage.

Jay had already started to clear the top of the table when he took this picture. You can see the water damage on the left side of the table. This is a chipboard table with a veneer finish. Jay decided to rout away the majority of the top and then he inlaid a piece of luan.

I was away on my work trip when he started this project. I’m glad because I would have been fretting over the mess he was making in the basement.

I am told that the mess in this picture was practically spotless as compared to the other messes he had made. Jay actually took the time to try to vacuum up a lot of the dust, but when you’re dealing with chipboard it just goes all over.

I guess it was quite the process to rout out the top of this table. When it was finally finished he cut a piece of luan to size and stained it. Then he started to put poly on it. I was eyeball-deep into my own projects so I let Jay do everything on this coffee table. At one point, though, he told me that he was going to tear his hair out because the finish was splotchy and looked like crap. He’d put about a dozen layers on and couldn’t get it right. After sanding off about three layers and smoothing it out I helped him get the finish to a point where he could tolerate it. I think that it came out pretty good. 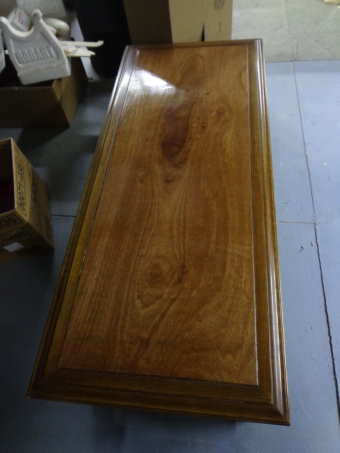 And there are enough layers of poly on there that it should be more difficult to mar the finish. We took this over to his mom’s on Christmas day and she loved it. Way to go, Jay!

The next gift that Jay made was one for me. I’ll show you a picture and see if you can determine its purpose.

He really did a beautiful job. He glued a bunch of scrap pieces together into a block and then turned it on his lathe.

Technically he has a metal machining lathe, but it turns wood, too.

I love the finish. It really looks great in the kitchen.

Have you figured out what it’s for?

I’m sure that you could spend all day guessing and never get it right. Here, let me show you… 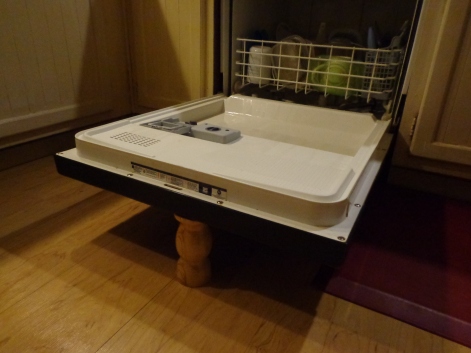 Yes, it is my Dishwasher Door Rest.

You see, I typically use my dishwasher as a giant drying rack because I hate how it washes dishes. I only run a load through it when I need to get the dishes off of the counter, but I don’t have time to spend washing them by hand. I know that I’ll end up re-washing some of them, but at least they aren’t on my counter.

Anyway, Jay was worried about ruining the hinges with the weight of the loaded bottom rack as I was washing the dishes and stacking them in there. For I don’t know how long I’ve had a can of polyurethane in the kitchen that I was using to set the door on each time. I kept asking him for something simple that I could maybe kick under the edge of the cabinet so that I no longer had to look at a can of poly on my counter.

No, I won’t be kicking this pedestal under my cabinet. Instead I will gladly display it on my counter. I LOVE this gift. It’s better than all of the jewelry I saw advertised on TV for Christmas (which was all ugly). Give me a utilitarian gift any day of the week over a piece of jewelry that will end up sitting in my jewelry box most of the time.

This entry was posted in Wood Work, Workshop and tagged gifts, woodwork, Workshop. Bookmark the permalink.