It seems like it was forever ago that I showed you the samples I had painted.

I decided that I just needed to sit down and do them so that they could be done and off of my table. I started with the wolf.

In order to get the lines dark I first used the gray wood stain. I felt like I had to use a LOT of stain in order to properly fill in the lines.

Then I went over the base of the wolf with a light gray. 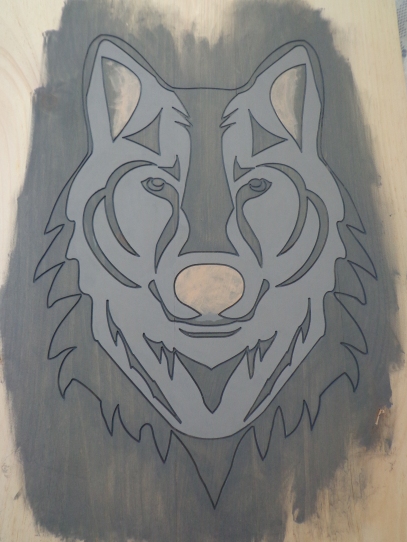 I also started to add color to his nose and the inside of his ears. This actually required two coats to get decent coverage.

Next came the darker accents. 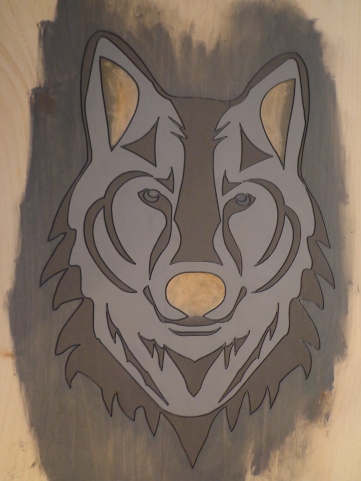 I added a slight washing of brown to the nose and ears as well. I was trying to get a little depth and not make it blah.

The last part was to finish touching up the nose and ears, plus add the eye color.

This picture is a little dark because I didn’t take it in the best light. I have handed it over to Jay so that he can cut out closely around the head. Once it is cut to shape I will stain the sides and back to finish it before clear coating the whole thing. We’ll add a hanger to the back and it will be done!

One down, one to go…

The tiger wasn’t complicated. It just had a lot more fiddly parts.

Obviously, I started with a thick white coat. Look how much the face stands out. Isn’t that neat?

Then I added some color to the ears and nose.

There’s nothing exceptional with that. Apparently I didn’t take any more progress pictures until after I’d spent a week and a half fussing with the black stripes. 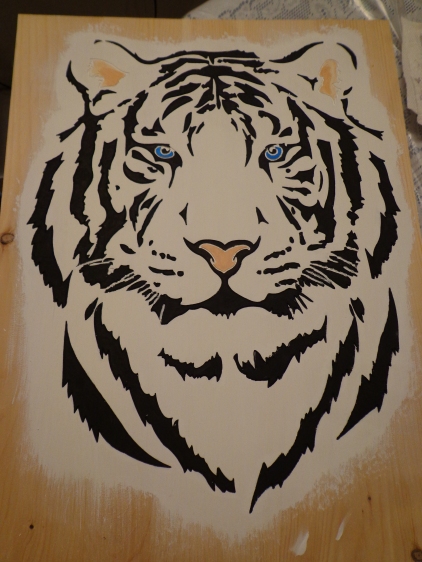 After a little more touching-up I finally had to put my brush down and say enough! I could probably sit and dab away at it for another three weeks, but it’s time to move on. I am calling this finished. 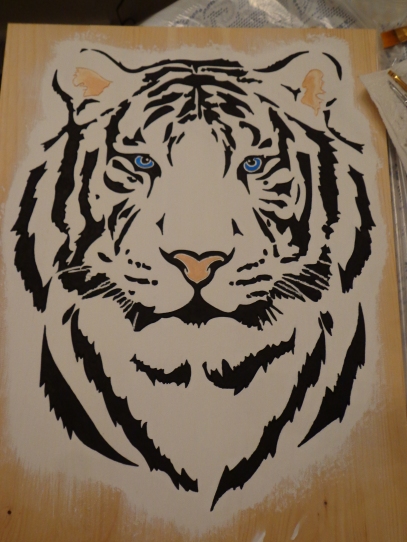 Once Jay has cut it out I will paint the sides and back, then also throw a clear coat on it. After the hanger goes on we can wrap them up and hand them over to the coworker.

Let me see if I can show you the samples next to the finished objects.

The finished big tiger is on the left with the sample painted in chalk paint on the right.

Actual finished big wolf on the left, sample (with the brown accents) on the right.

1 Response to Finished Painting the Carvings