Posted on September 6, 2019 by civilwarrose5

Since it’s National Sewing Month, and also a long weekend, I decided to try sewing a long-sleeved t-shirt. I’ve never worked with knits before so I wanted to give it a try.

I’ll give you a head’s up that it didn’t turn out perfect. In fact, far from it! But I learned a lot. Especially since I’m using an older model Singer Merritt machine that doesn’t have all of the fancy stretch stitches. 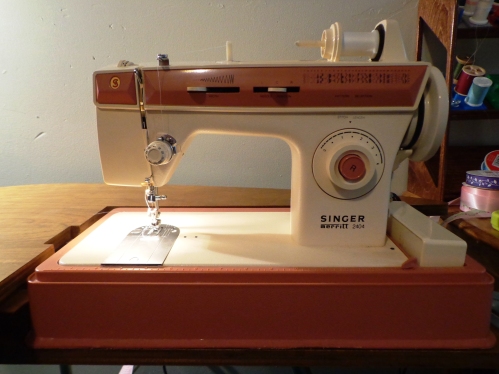 I knew that my first try wouldn’t be a spectacular success and I didn’t want to waste good fabric on it, so I bought one of the new ‘5 Yards for $5’ bolts that Wal-Mart sells. This is a gray ribbed 100% polyester.

I wasn’t sure how well it would work, but I figured it would give me some experience trying to figure out how to sew knits on my machine. Chester decided that she needed to do some Quality Control, though, and checked out the fabric.

The Butt Quotient was good, but it’s not the most stringent QA test. She really wanted to put it through its paces, so she put it through the Napability Factor test.

(Look at that sweet face!)

After it passed all quality inspections I threw it in the washer so that if there was any shrinking to be done that it would happen before cutting out my pieces.

Tip #1 – Before washing lengths of fabric in preparation for garment sewing, either serge or zigzag the cut edges of fabric that is prone to fraying. This will help prevent some big messes and make the fabric neater when you pull it out of the dryer. 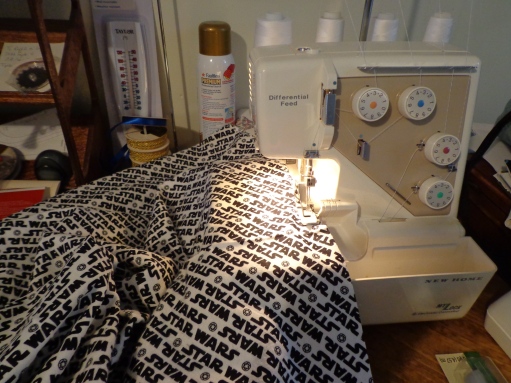 The pattern that I decided to use was one that came with the Sewing With Knits class that I had purchased on Craftsy a few years ago (now known as Bluprint). This is a pdf pattern that you print out on 8.5″ x 11″ paper and then tape together.

I had decided that I wasn’t going to cut the pattern out of these papers. Instead, I would trace it onto blank paper so that I can use this pattern again for other sizes if I wanted.

Tip #2 – use washi tape to tape your pattern to your surface so it won’t move. Then, again, use the washi tape to tape your tracing paper on top of the pattern. The washi tape has enough adhesive to hold the paper down, but you can easily pull it off the paper without any damage at all. The other great thing is that you can peel it up and reposition your paper if needed and it will stick again when you move it into the next spot.

Look for washi tape in the clearance areas of your local craft stores, or look for really great deals on scrapbooking supplies (this is where you’ll find it). Today I found some more washi tape marked down to $1.97 at JoAnn Fabrics and Hobby Lobby also had some marked down to $1.49 (it was originally $4.99).

The color and pattern doesn’t matter because you’re just using it to temporarily hold down some paper. I’ll keep these in my sewing supplies drawer.

Once I was finished with the pdf pattern sheets I folded them up and put them in a clasp folder. This way I have all of the pieces together when I need to retrace it or use it again. 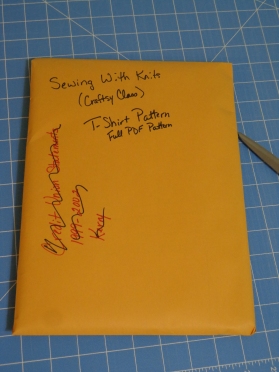 I could have made either a V-Neck or Scoop Neck t-shirt. I chose V-Neck (because why not try the hardest version on your first try??). I could also choose between short, 3/4 length or long sleeves. I chose the long option.

As you can see, the V-Neck part of my shirt sucked. To be fair, by the time I got to this part of the pattern I knew that I was going to have a very bad neck. I tried on the shirt before putting the collar on and realized that it was WAY lower than I liked. Also, when I saw the picture of the finished shirt it was always on a very skinny model.

In order to be comfortable with this, I would want to redraft the pattern to have wider shoulders, a higher neck and slightly bigger sleeves. The sleeves felt good around the biceps, but they were form-fitting around the lower arms.

It definitely hugs the boobs and the hips, but the top is just too floppy. There’s not enough material for my tastes on the front.

Maybe it would be different if I tried the scoop neck version? But I doubt it. The puckering around the collar is due to the multi-stitch zigzag that I tried to use for top stitching. My machine is old enough that in order to try some fancy stitches I have to change out cams in the machine.

I didn’t hem the sleeves or the bottom because I didn’t think it was worth it for this top. I might wear it around the house, but I probably won’t try to fix this one. I also don’t think I’ll try this pattern again. It just isn’t meant for a chubby girl.

However, this is to show you that things don’t always work out perfectly. The good thing is that it was a great learning piece. I have a couple more t-shirt patterns that I might try to make soon. I have more of this gray fabric so I’m going to give it a try. The fabric isn’t great, but it makes for good practice material.