I don’t have a dress to share with you today (I know! I still need to do one for March.) At church we are still collecting items for the Baby Boxes that will be sent to Haiti, so I’ve been working on those types of things.

Remember when I posted about the flannel sheets I had found at Goodwill:

It was a Queen size set made of really nice flannel.

Here is how they look today: 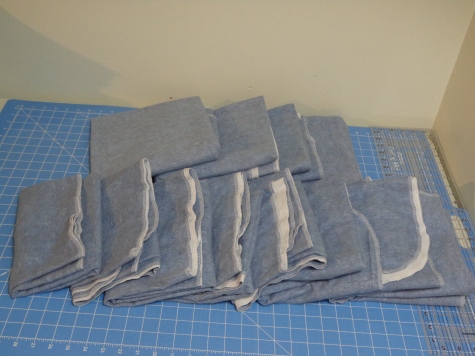 I made 12 receiving blankets out of the flat and fitted sheets. That doesn’t sound like a lot, but I try to make each blanket around 36″ x 36″. Some of these are slightly smaller, but none of them are smaller than the receiving blankets that you can buy at the store.

I had purchased another set of King size flannel sheets for blankets:

However, after washing and cutting them into the blanket-sized pieces I decided that the material is just too thin and not-nice. After handling the other set I don’t want to include these for the baby boxes. Don’t worry, they won’t go to waste. The cat adoption center that I have been donating to has receiving blankets on their wish list for donations. They use them with litters of kittens so I’ll serge the edge of these and donate them to the cats. I’m sure they’ll be more than happy to poop on these!

After crocheting my last Project Linus blanket I had almost an entire 1 pound skein of yarn left over. 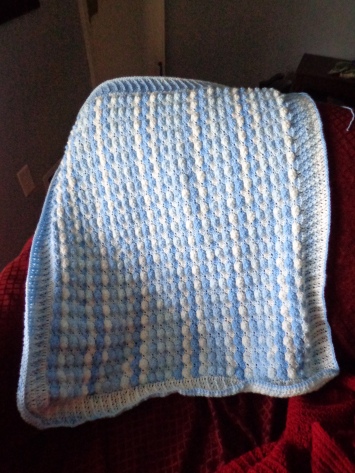 Due to the hard surfaces that the babies lay on for a good portion of their first few months, they also collect hats for newborns to be included in the baby boxes. I found what looked like a simple crochet pattern and gave it a try. This is the first project that I’ve ever tried crocheting in-the-round (crocheting in a circle). 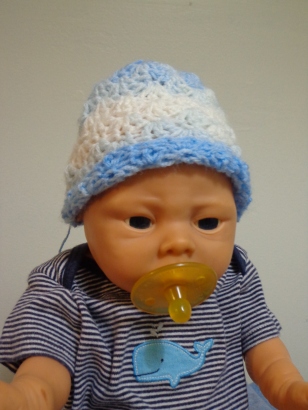 Brandon was nice enough to model this for me. I still have to weave in the ends. 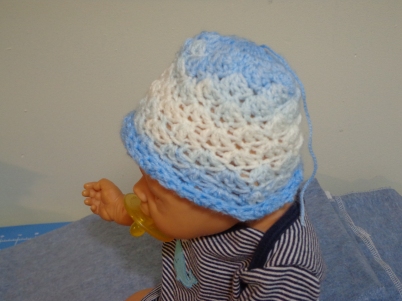 It turned out okay and seems to fit him just fine. I wasn’t happy with my work, though, so I have found another simple pattern that I want to try next.

Finally, last weekend I’d heard that Hobby Lobby had a lot of yarn on clearance. Jay and I ran up there, but I didn’t find any yarn. Instead, I found this:

It was $3 per yard (the very most that I’ll pay per yard for Dresses material), but I thought that the purple on the right would make a nice accent ruffle. Also, we are going to make dresses for the women and girls in our sister parish in Mexico, so I thought the middle piece would work nicely for one of those. The other piece called to me so I brought it home. I’m thinking that will be another dress for a lady made using this pattern that I showed before:

So that’s where my Dresses projects stand!