A New Missal Cover for Karen

Years ago I had (poorly) made a missal cover for Karen:

I used a cross stitched piece that I had stitched years ago and that I had placed on my fridge (isn’t that where you display your art?). Karen loved that piece, so I made it into a cover for her daily missal. If you’re not Catholic, a missal is a book that contains the outlines (prayers, readings, etc) for each mass in each of the three church years (A, B, C). This way you can read along with the lector as they are proclaiming the readings.

According to the date on the picture I made this in 2013. So for the past five and a half years Karen has handled this book cover almost every single week day. She has a different missal for Sunday mass. This past fall I had attended an event that was held in the little chapel where daily mass is celebrated and I happened to see Karen’s missal. I couldn’t believe what I was seeing! She had handled it so much that all of the beads were long gone, but most of the stitching was as well! I was embarrassed that she had to use it in that condition. I determined that I needed to make her a new one for Christmas.

I found a cross stitch pattern that I liked, but the words were wrong. It read, “The Lord is my shepherd…” Not that there’s anything wrong with that psalm, but I know that Karen’s favorite contains the words, “O Lord I know you are near.” I used the pattern I found, but figured out the graphing needed to use Karen’s phrase instead. This is how it turned out:

I’m not sure that this picture is better, but here’s a close-up:

Once that was done I then had to work on the pattern for the actual missal cover. I knew that I would only be able to cut this piece once in order to get it in the right position. I had to be confident in the design before I could make any cuts.

I made three different covers before I felt that I could make the actual cover to be gifted. I threw in a little monkey wrench when doing the actual cover. I decided that in order to protect the stitching on this one I needed to cover it with a piece of clear vinyl. Sometimes the best ideas end up being very bad executions. At least, in my case they do. After I had finished this project I told Jay that the next time I come up with a brilliant idea he needs to tell me not to bother. Somehow I don’t think that will happen.

I wasn’t completely happy with the end product (I rarely am), but here it goes:

I have a Sunday missal of my own, so I used it to make sure the cover would fit properly. After I decided to do this I had wandered into the little chapel before choir practice and measured Karen’s missal to make sure it was the same size as mine. I wasn’t sure if they come in standard sizes or what. 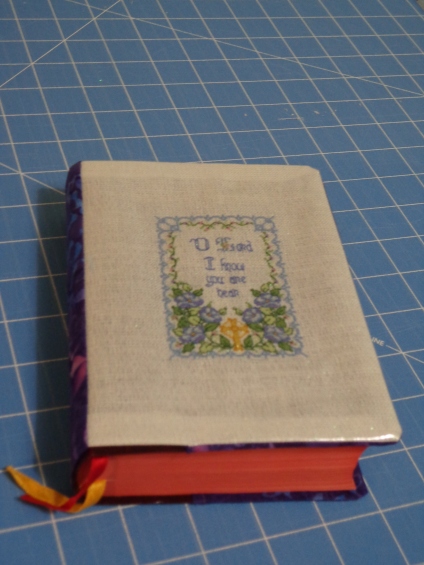 In this picture you can somewhat see the reflection off of the vinyl protective cover. I only put it over the cross stitched piece as I thought it might prevent the rest of the cover from stretching properly over the book. Also, I knew it would add a little bit of bulk to the seams and I wanted to avoid a lot of that problem. Jay thought that it looked nice. If I were to do it again I might add a piece of white behind the cross stitched piece just to brighten it up a bit. Oh well.

Karen’s favorite color is purple, so I used some of the pretty purple fabric that I had on hand for the rest of the cover. She loved it when she opened it, and has placed it on her missal. So I guess it was a success!