A Shelf for Piano Music

For the last few years I’ve had two pianos. One in the family room:

And one in the front living room (my original piano):

I have been piano-sitting the baby grand for my best friend while she made a temporary move to D.C. Recently, however, it has turned out that her move to D.C. might not be so temporary. With that in mind, it was decided that we will just consider the baby grand to be mine. If she ever moves to a place where she has the room and wants it back, though, I’ve told her she can take it. So, I guess that I now own a baby grand piano!

As you might imagine, I have neglected the upright and play only the baby grand. However, all of my music was stored in the living room (near the upright). 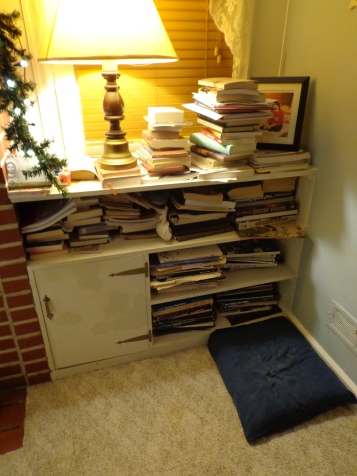 What a mess! My rocking chair is usually placed in front of this area so I typically always have my back to this, otherwise it would have been dealt with long ago. Not only do I have my sheet music stored over here, but this is also where I started keeping my books on faith and religion. Thus the two stacks of books growing almost as tall as the lamp!

I had another mess going on in the family room around the baby grand:

The little stand next to the piano held some books, while others were just tossed up onto the top of the piano. And during this Advent season when I didn’t have time to deal with it, all of my extra choir music got dumped on top, too. It was really getting bad.

After Thanksgiving, when I found out that the baby grand is going to be here for a long time, I decided that I needed to get all of my music around the piano that I actually play. And it had to be organized. Since Christmas was coming up I asked Jay to build me a bookshelf for Christmas. I gave him the dimensions that would fit there, plus the spacing for the shelves, and he went to work.

Jay did the construction and rough sanding, while I did the finishing work. Yes, I finished my own gift, but he was working on a dozen other things that I had asked him for so it wasn’t a big deal. He even fancied-up the sides: 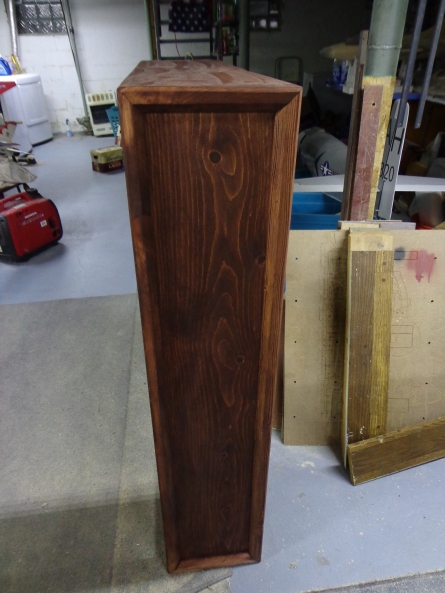 He was going to put the trim on top, but I stopped him. I know myself too well and that top would become another surface on which I could lay things. I didn’t want the trim getting in my way or bending books out of shape. I can be a bit picky!

Before I give you the big reveal, scroll back up to the ‘Before’ pictures.

Are you ready? Are you excited?

First, we installed the shelf in the family room so that I could move all of the music into their new spots:

See! I told you I would end up putting something on top. Those are the plastic protectors that I use to put my choir music in my binders (which also take up the top shelf). If you’re wondering, the ‘Math 3’ binder actually holds my Lent/Easter Choir music. My sister is a teacher and had an extra binder that she didn’t need. So I scooped it and have put it to good use.

I was a bit surprised when I put everything away. I thought that I had more music. It doesn’t look like I have very much at all! Well, as you can see, there’s more room for me to add to the collection.

Once the music was out of the living room I dusted off those shelves (which seriously needed it!) and put my books on them correctly.

(again, scroll up to see the ‘Before’ picture first)

What a difference! Even Bob thinks that it looks much better. I still have to organize the books since I just threw them on the shelf to get them put away, but that’s okay. I can handle this kind of disorganization! It’s amazing what one piece of furniture can do for your peace of mind.